Adam Deines stands between Artur Beterbiev and another unification opportunity 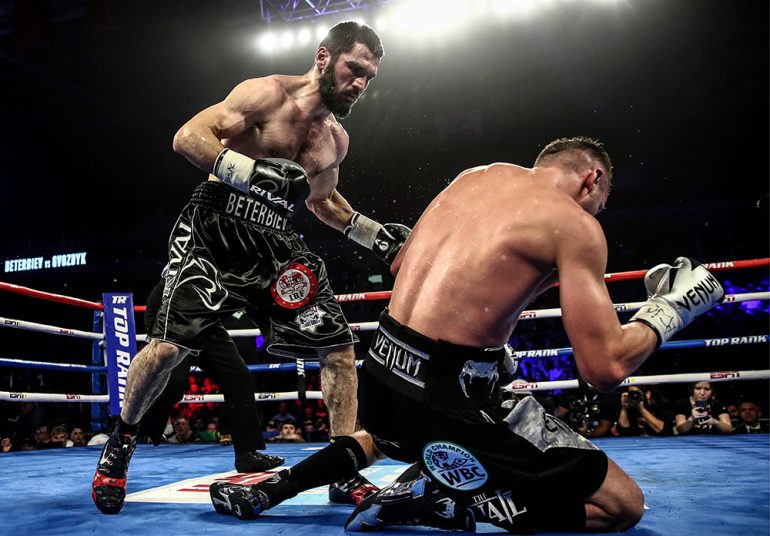 Unified light heavyweight world champion Artur Beterbiev has had his share of frustrating layoffs, but he will be hard pressed to top the frustration of what has transpired over the past year.

But now, almost one year to the day that he was originally supposed to fight, he will finally climb back into the ring to defend against Russian countryman Adam Deines on Saturday (ESPN/ESPN Deportes/ESPN+, 3 p.m. ET) at Megasport Arena in Moscow with the prospect of a three-belt unification fight later this year if he is successful.

In the co-feature, super middleweight Azizbek Abdugofurov (13-0, 5 KOs), an Uzbekistan native fighting out of Malaysia, will defend his regional belt against Russia’s Pavel Silyagin (6-0, 4 KOs) in a 12-rounder.

“I feel well in general but as for the delay it can frustrate anybody,” Beterbiev told The Ring through an interpreter. “But everybody is in the same situation right now, not just me. So, yeah of course, I got frustrated but I take it as it is and I moved forward.”

When he was going through a promotional dispute with Yvon Michel and wound up in litigation it led to Beterbiev fighting only once in 2017, when he knocked out Enrico Koelling in the 12th round to win the vacant IBF light heavyweight world title on a Top Rank card.

Beterbiev was also limited to just one fight in 2018, when he fought for Matchroom Boxing and knocked out Callum Johnson in the fourth round of a back-and-forth slugfest in which Beterbiev got off the deck to score the stoppage.

When he finally signed a promotional deal with Top Rank in 2019, it looked as though his fortunes had changed and he got busy, at least by today’s standards, with two fights. He knocked out “Hot Rod” Radivoje Kalajdzic in the fifth round in May and returned in October of that year for his biggest fight. It was a title unification clash with unbeaten Oleksandr Gvozdyk in Philadelphia and it was an action-packed fight. Beterbiev won by 10th-round stoppage to unify the IBF and WBC titles and sent Gvozdyk into retirement.

Then his momentum ended. He has not fought since that highly significant victory against Gvozdyk, a career-long 17-month layoff.

“What can I do? What can I say about it,” Beterbiev said. “I think it would be silly for me to be fixed on something like that. I’m just trying to do my best to train now and fight my best.”

Top Rank scheduled Beterbiev to return for defense No. 4 last March 14 in New York, where he was to slated face Chinese mandatory challenger Meng Fanlong (16-0, 10 KOs). But then everything in boxing – all of sports, really – ground to halt due to the emerging coronavirus pandemic.

The fight was shifted two weeks later to March 28 in Quebec City – Beterbiev lives in nearby Montreal — but that was eventually canceled as well when it became clear the sports shutdown would last several months.

Boxing inched way back into action in June and Beterbiev was rescheduled to fight on Sept. 25 in Ekaterinburg, Russia. However, instead of Meng he was paired with Deines, who was got the fight when Meng – who had defeated Deines in an IBF title eliminator to earn the shot against Beterbiev – dropped out because of visa issues that prevented him from fighting in Russia.

Beterbiev-Deines was then moved to Oct. 23 in Moscow for logistical reasons before being postponed once again after Beterbiev suffered a rib injury in training.

And once again, the fight was rescheduled, this time for Jan. 30 at the VTB Arena in Moscow. And what happened next? You guessed it. Another postponement.

This time it was because Beterbiev had come down with Covid-19 in late December and was very ill. Once he recovered, the fight was planned again, this time for Saturday — cross your fingers.

As much of a roller coaster all the starts and stops have been for Beterbiev, it was the initial postponement a year ago that was the most difficult to deal with.

Going through Covid-19 was also difficult he said. It put him on his back for about 10 days, during which time he was quite ill.

“I was actually very sick,” he said. “I had a hard cold, a runny nose, sore throat, earache, all those things, and a high fever for a few days. I stayed asleep for like 10 days I guess. A few days before the quarantine expired I already felt well, so I recovered. But I was really sick for 10 days. I had a fever, all the symptoms. I was really sick.”

He said he is better now but sounded a little concerned that perhaps he had not reached 100 percent with the fight looming.

“Everything is good with me right now but we will see on (Saturday) what happens,” Beterbiev said.

For Beterbiev (15-0, 15 KOs), 36, a two-time Russian Olympian, the fight will the first of his pro career in his home country since he relocated to Montreal to turn pro under Michel’s promotion.

“I need to perform in Russia, in my motherland,” Beterbiev said. “I have had fights in Canada and in America and now I am having this fight in Russia so, of course, I have some degree of anxiety and some worries but I have to overcome it.”

He said he is not concerned about extending his perfect knockout record, which he sounded a tad perturbed being asked about.

“I’ve just been preparing for this fight. I’ve studied my opponent,” he said. “I will go out there, I will try to do a good job and do my best. As for the knockout, if it happens it happens. If it doesn’t, it doesn’t.”

What Beterbiev is more concerned with, of course, is retaining his belts because if he does there is a strong likelihood that he will be matched late this year with the winner of the vacant WBO title bout between Joe Smith  Jr. (26-3, 21 KOs), from New York’s Long Island, and Russia’s Maxim Vlasov (45-3, 26 KOs). They are scheduled to meet on April 10 in the main event of a Top Rank Boxing on ESPN card at the Osage Casino in Tulsa, Oklahoma.

“Of course, I would be interested to have a unification fight. I would be happy to have it,” Beterbiev said, although he declined to voice an opinion on the outcome Smith-Vlasov.

“It would be too much for me to think about who would win, Smith or Vlasov,” he said. “I don’t think about it right now. I’m only thinking about my own fight.”

He did allow, however, for his mind to wander, at least briefly, when asked about the prospect of a future showdown with The Ring super middleweight champion Canelo Alvarez (55-1-2, 37 KOs).

Alvarez made a trip up to light heavyweight in November 2019 and knocked out Sergey Kovalev in spectacular fashion in the 11th round to claim a world title and then vacated. Many think Beterbiev is the only opponent who could give the pound-for-pound king a serious fight from middleweight to light heavyweight.

“I don’t think it’s just me who can potentially fight him but if he returns to light heavyweight, which may happen, I would meet him in the ring,” Beterbiev said. “This is the reason I work. I welcome all these fights. These are good events for me so I am open to them.”