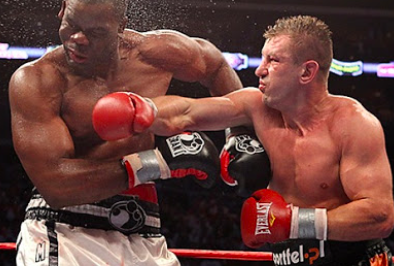 Popular Polish tough-guy Tomasz Adamek held world titles at light heavyweight and cruiserweight in the mid to late 2000s before embarking on an excellent run at heavyweight.

Adamek was born in the small village of Gilowice, 400 miles south of the Polish capital, Warsaw on December 1, 1976.

“We were poor,” Adamek told The Ring. “When I was born, in our home, my father said to my mom, pointing at me, ‘Fighter.’ My father died in an accident when I was two-years-old. He drove a bus to the mine [to drop off the miners] and the bus fell off the bridge.”

Adamek took up boxing when he was 12 years old and competed as well as studying at school. He finished school and went to college where he completed a course in Administration.

The Pole won multiple national amateur titles. The highlight Internationally came when he won a bronze medal after losing to amateur stalwart Aleksandr Lebziak at the 1998 European championships in Minsk, Belarus. He decided to turn professional after going 110-10.

“That was my destiny,” he said of becoming a professional boxer. “Like my father said when I was born. That was God’s plan.”

Adamek initially signed with Panix Promotions, who at one time promoted Lennox Lewis, and he made his debut in Manchester, England in March 1999.

After the English promoter became defunct Adamek fought largely at home and built his record to 27-0. However, he felt his career wasn’t going anywhere and craved a bigger opportunity so signed with Don King and was instantly rewarded with a fight for the vacant WBC light heavyweight title against Paul Briggs in May 2005.

Three-and-a-half weeks before the contest “Goral” had his nose broken in sparring but it didn’t stop him from going ahead with the fight.

“I had a swollen nose, the doctor said I couldn’t fight but I went to the ring,” he said. “I don’t know who else goes to the ring with a broken nose but I was young and hungry, that was my chance.

“In the second round he hit me clean and broke my nose again. The whole corner was bloody, blood everywhere but I showed big heart and I won the fight [by 12-round majority decision]. It was a very tough fight.

“I was very happy. The next day I couldn’t see because my nose was all swollen. We came back to Poland. Many people in my village, maybe 2,000 people came to congratulate me, there was music and everything.”

King brokered a deal for Adamek to make his first defense against Thomas Ulrich in Dusseldorf, Germany.

“It is very difficult to win in Germany,” he said. “Don King made a good deal for us to fight there. They were sure they were going to win but I hit him and dropped him and won in six rounds. Almost nobody wins on points in Germany.”

A contractual dispute with King kept him out of the ring for a year before he returned edging past Briggs in a rematch, again by 12 round majority decision.

Next up was unbeaten American hope Chad Dawson. The two met in Kissimmee, Florida in February 2007.

As well as it being a bad style matchup for Adamek, he struggled in camp to lose the necessary weight and lost a wide unanimous decision. 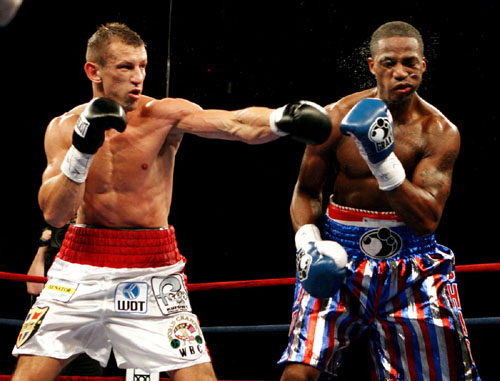 Adamek resurfaced at cruiserweight and won four fights, including an eighth stoppage over former undisputed champion O’Neil Bell. That helped position him for a fight with IBF titleholder Steve Cunningham as well as the vacant Ring Magazine championship in December 2008.

“That was my natural weight, I didn’t have to lose anything, I felt very good,” said Adamek, who dropped the American three times en route to a split decision victory. “I had to lose too much weight to make light heavyweight.”

Adamek went on to make two defenses. But with a lack of viable options his team decided to make the bold move to go up to heavyweight.

“That was the biggest fight ever in Poland,” said Adamek, who beat up his compatriot for five rounds. “Everybody knows Andrew Golota. It was a full arena, 12, 13,000 tickets sold out quickly.”

After besting fringe contender Jason Estrada, Adamek met the much bigger Chris Arreola at a packed Citizens Bank Arena, Ontario, California in April 2010. Cheered on by a boisterous Polish following, Adamek was able to gut out several tough spots in a grueling fight to edge a majority decision much to the delight of his traveling fans who partied the night away.

“That was a great fight,” he said. “He took a good shot. He threw combinations and was very strong. I lost my tooth in the fight. I was very tired after the fight because he pressed me but I prepared well for the fight and my conditioning was great, that’s why I beat him.”

Adamek won three more fights and was given a shot at WBC titleholder Vitali Klitschko in the brand-new Stadion Miejski, Wroclaw, Poland in September 2011.

Unfortunately for Adamek and his legion of fans he was unable to pull the upset and was stopped in 10 rounds.

“That was a full stadium, I think 40,000,” he said. “I only arrived 10 days before the fight. That was the biggest mistake of my career. I was quick at the time but in Poland I was very slow, I was nothing. I was very mad after the fight. It was his night.” 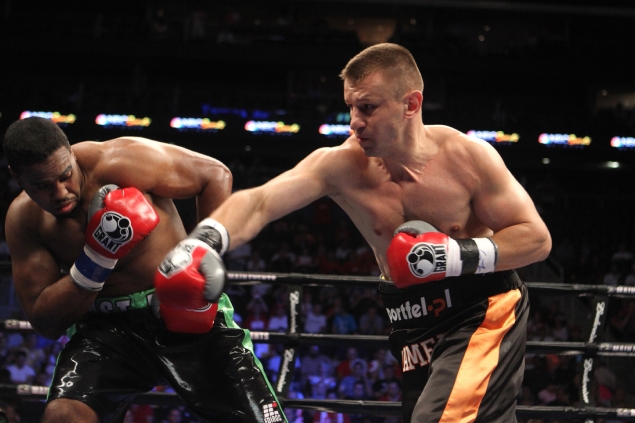 Adamek on the attack against Eddie Chambers.

He continued his career and had enough in the tank to score wins over Eddie Chambers, Travis Walker and Cunningham in a rematch but his prime was behind him. He says was ill in the build-up and lost to Yvacheslav Glazkov. After that he won some fights but also lost a few and fought for the last time against Jarrell Miller in October 2018.

Adamek lives in Kearny, New Jersey with his wife and has two daughters. He owns some property and made good business decisions.

“Polish government proposed me to be the face of boxing for the new young Polish fighters but when you are a coach and have to travel and I wouldn’t be home as much. I am still in negotiations with my wife,” he said, laughing.

BEST DEFENSE
Chad Dawson: Dawson was very good, but at that time, I was very slow, it wasn’t my day. He had the best defense, it was tough to land a clean shot on him. Eddie Chambers was very sneaky and it was difficult to hit him.

BEST FOOTWORK
Dawson: He was very technical, difficult to hit, he moved around all of the ring.

SMARTEST
Klitschko: Klitschko was a very smart fighter because he was tall and difficult to come to him. He was very smart.

STRONGEST
Michael Grant: He was very strong when he hit me on the arm, I had a bruise for maybe one month. He didn’t catch me clean, that’s why I won the fight. Klitschko was strong.

BEST CHIN
Klitschko: I had many wars in the ring. Cunningham, I dropped him, he stood up and fought 12 rounds in the first title fight. Arreola took a good shot. Klitschko, he had a very good chin.

BEST PUNCHER
Travis Walker: He hit me clean and I went down early in the fight.

BEST BOXING SKILLS
Klitschko: Klitschko had good skills, Dawson, Cunningham, Paul Briggs. There were many, it’s difficult to say one. Klitschko was champ.

BEST OVERALL
Klitschko: Klitschko was the best opponent. He was champ.