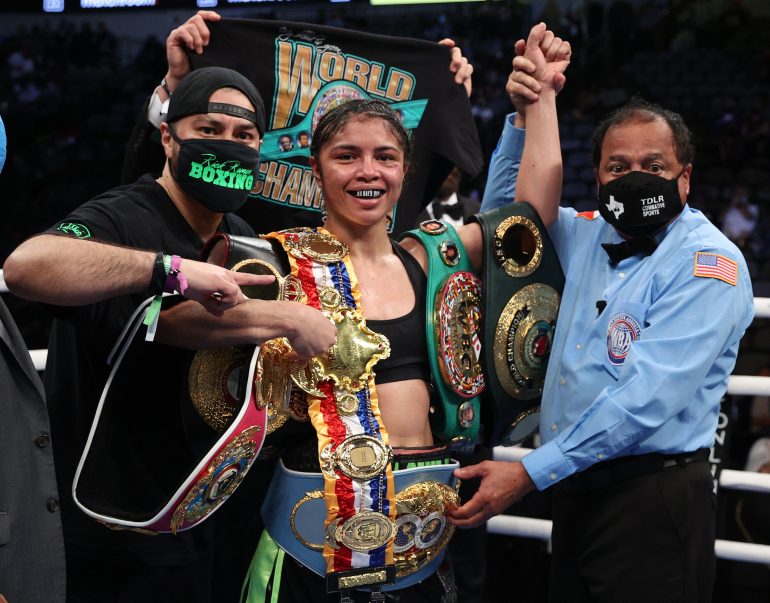 The radiant glow of victory didn’t last very long. Maybe a few hours. Maybe a little more. Then it dimmed. Time to get back to work.

The sun hadn’t even broached the horizon into a new day and Jessica McCaskill (10-2, 3 knockouts) was already thinking ahead.

She had just produced the biggest victory of her career—dominating future hall of famer Cecilia Braekhus in a rematch to retain four major titles (WBA, WBC, IBF and WBO) and win the inaugural Ring Magazine women’s welterweight championship.

McCaskill was barely out of the American Airlines Arena in Dallas on Saturday night when she was perched in front of a screen watching a replay of the fight at 4 a.m. Sunday morning.

McCaskill saw a lot of good things she did against Braekhus (36-2, 9 KOs), and some things she’ll need to work on forging ahead to what seems like an inevitable showdown with The Ring’s No. 1 pound-for-pound female fighter Katie Taylor. 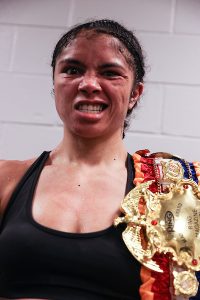 Jessica McCaskill having some fun posing with her new Ring championship belt after defeating Cecilia Braekhus at the American Airlines Center (Photo by Ed Mulholland/Matchroom).

“Sometimes it’s different when you’re in there and when you watch it, so I thought I was doing really well, and I felt sharp, and to see it come through on the screen was good,” said McCaskill, who’s 36. “But it is pretty brutal watching the playbacks, because it’s like you won the spelling bee, and then you have to go home to dad and he’s like, ‘Let’s do some more spelling bee practice.’

“It’s like, ‘What did you do wrong, and what could you have done better?’ You almost have to berate yourself a little bit. We don’t sit on the high horse very long. We talk a lot more about the negatives. It wasn’t bad at all. I didn’t get a chance to bask in the glow—but I wouldn’t look to, either.”

McCaskill wants the other women out there at 147 to know she’s not taking any time off.

Rick Ramos, her manager and trainer, wasn’t surprised at all by the outcome. Ramos saw McCaskill sit more on her punches and was the more accurate puncher.

Ramos has spoken to Eddie Hearn, the executive managing director of Matchroom Boxing, Taylor’s promoter, about a possible million-dollar fight between the two stars.

Hearn didn’t commit, though he did admit, according to Ramos, it was a mega payday.

“Eddie was alluding to the summer, maybe June or July, depending on whether or not Katie Taylor takes another fight,” Ramos said. “I kind of want Katie to take another fight. She’s racking up the miles. If this fight takes place at 144, 145, or wherever this fight lands, because it’s below 147, I’m going to ask for eight-ounce gloves and we’re going to put some heat on Katie.

“Hopefully, if we pull off Katie, Jessica will be one of the greatest female fighters of all-time. We’ll see.”

Team McCaskill saw glimpses of that against Braekhus. 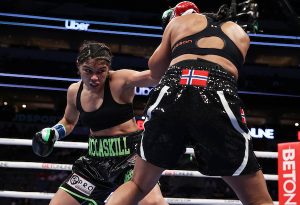 Jessica McCaskill left no doubt this time against Cecilia Braekhus during their Undisputed Welterweight Championship fight at the American Airlines Center in Dallas, TX (Photo by Ed Mulholland/Matchroom).

Ramos felt like “The First Lady” wanted no part of McCaskill.

“We always felt confident against Cecilia,” Ramos said. “We picked up a couple of weeks ago that Cecilia was a little off; that there wasn’t something right about her. We wanted to explore that and see what happened.

“Maybe Cecilia was there for a payday. Maybe she was having problems making the weight, I don’t know. Jessica buzzed her in the second round, and hurt her in the third. Cecilia wanted no part of Jessica after that.”

McCaskill is now on an upward arc. She said she could have fought another handful of more rounds against Braekhus. For the rematch, McCaskill trained on two-minute rounds, instead of three-minute rounds, and did more than 10-plus rounds a day whether it was sparring or on the mitts.

And as for Taylor …

“I’ll follow Rick’s lead as to what’s next and there are names we talk about both privately and in public, weight classes we talk about privately and in public, but we never chase money, we chase legacy and belts,” McCaskill said. “We were offered six figures for a video game and we turned that down, because we didn’t feel the vibe and I didn’t like the communication. Money is not what we base things on. So, we turned it down.

It is, however, McCaskill’s time.