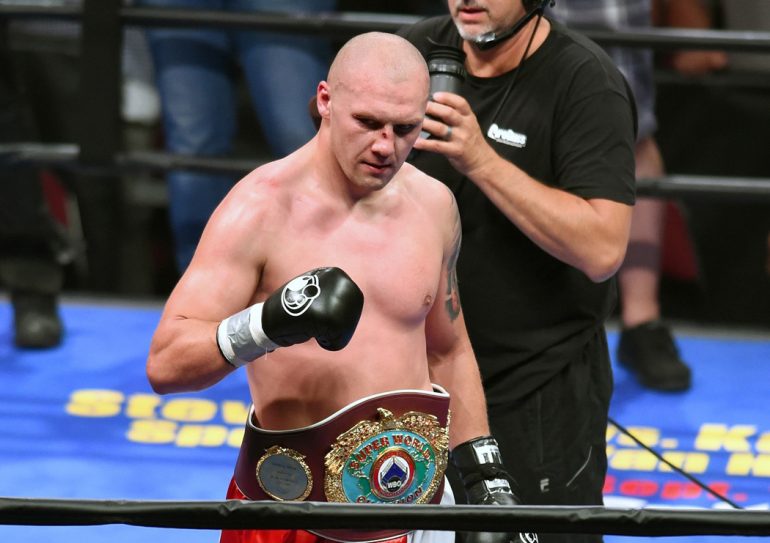 The two had been scheduled to meet on December 12, however, the week prior to the fight, Glowacki, who is rated No. 3 by The Ring at 200 pounds, tested positive for COVID-19. He has since been given a clean bill of health and is ready for action following a 21-month hiatus.

“I’m very happy I can finally fight after such a long layoff,” Glowacki (31-2, 19 knockouts) told The Ring through translator Jacek Szelagowski.

“I was absolutely devastated when I found out I was Covid positive, but every cloud has a silver lining. Now I feel better than in December. I have better sparring. When I came back to training after Covid, I had some stamina issues, but everything is OK now. I feel pumped up and ready.

“Luckily, I will get another opportunity and I’ll do my best to get my WBO belt back. I heard Okolie had some plans to unify, but he has to beat me and it’s not going to happen.”

The 34-year-old Polish fighter, who claimed his first world title by climbing off the floor to score a rousing come from behind knockout over Marco Huck in August 2015, feels the rangy Okolie possesses a few tools that may give him problems.

“He’s strong, his long right hand might be a problem, and his reach generally [is an issue],” said Glowacki before looking on the bright side. “I’ve noticed some [weaknesses], but I won’t tell you before the fight. You’ll see in the ring.”

Glowacki, who has trained in the mountains of Poland under the watchful eye of Fiodor Łapin, claims to retain the same appetite for combat that he’s always had.

“I’m calm, but very hungry,” he said. “I’m looking forward to this. I think I needed a break after the Briedis fight.

“I can’t wait. Be ready Lawrence! And stay healthy!”

Glowacki’s promoter, Andrew Wasileski of Knockout Promotions, is pleased his fighter has the opportunity to regain a world title.

“We all know Krzysztof loves to fight and has such a big heart,” said Wasilewski. “He’s never afraid to trade punches, never backs up. He’s not a great talker, but he’s a real warrior. It’s great to work with him.

“It’s not a secret that Krzysztof was struggling with some injuries recently, but everything is OK now and I hope he’ll stay healthy. I saw some of his latest sparring sessions and he was dealing with tall guys, so I’m optimistic. He’s strong, full of energy, fists are flying.”

Okolie was the 2016 U.K. Olympic representative. He turned professional in early 2017 and since then, “The Sauce” has claimed British, Commonwealth and European championships and posted wins over Luke Watkins (TKO 3), Matty Askin (UD 12) and Yves Ngabu (TKO 7) respectively. The 28-year-old, who has improved significantly, enters the fight ranked No. 6 by The Ring at 200 pounds and sports a perfect 15-0 (12 KOs) record.

The bout and undercard action will be broadcast by DAZN in the U.S. and Sky Sports in the the U.K.