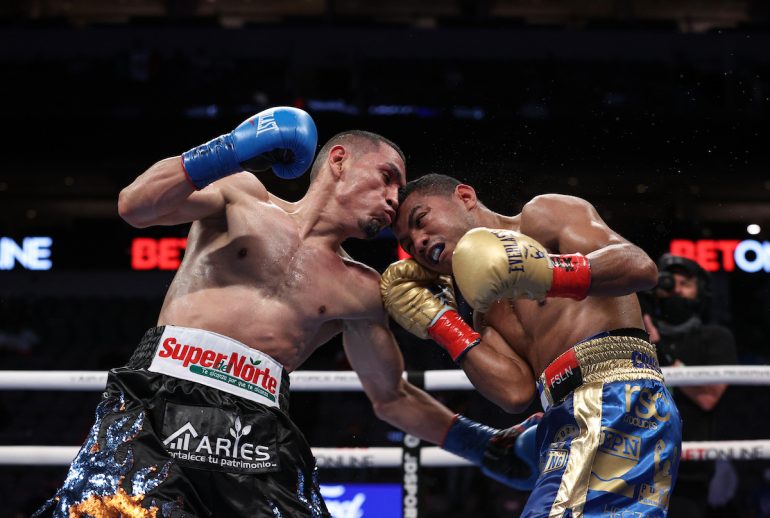 DALLAS – The rematch between Juan Francisco Estrada and Roman Gonzalez, eight and half years in the making, was well worth the wait.

Estrada, who lost their storied first encounter by unanimous decision in late 2012, evened the score with a split decision victory on Saturday at the American Airlines Center. Estrada (42-3, 28 KOs), who retained the Ring Magazine and WBC 115-pound titles and added Gonzalez’s WBA belt to his collection, won by scores of 115-113 and a ridiculous 117-111, while the third judge scored it 115-113 for the four-division titleholder from Nicaragua.

Both junior bantamweights exhibited the kind of sublime skill, technique and ring generalship that is wielded only by exceptional boxing talents who have developed into complete fighters by facing the best fighters of their generation in multiple weight classes. They also displayed breathtaking warrior spirit, durability, and stamina.

Estrada and Chocolatito both had their foot on the gas all night long. 🔥 (@AutoZone) pic.twitter.com/fwrQnuT5l6

Marvin Hagler, who passed away earlier in the day, would have approved of the elite-level slugfest. Estrada and Gonzalez had to put in Spartan training camps like the former undisputed middleweight champion was known for to do what they did for 12 rounds.

And they had to possess the potent combination of Hagler’s dogged determination and all-around craft for the fight to be as entertaining as it was.

Eddie Hearn, whose Matchroom Boxing promoted the event that was streamed live on DAZN in the U.S., said it was the best fight he’s seen live in 33 years of watching boxing.

It sounds like typical promoter hyperbole but it’s appropriate for Estrada and Gonzalez, aggressive boxer-punchers who have mastered the finer points of the sweet science. There’s nothing they can’t do in the ring. They can punch and take a punch. They can defend themselves as they attack. Every punch is delivered with textbook form and maximum leverage, supported by near-perfect balance, timing, and accuracy, which made it all the more incredible that neither fighter was dropped or seriously rocked at some point during their non-stop high-volume exchanges.

The fight was reminiscent of Hagler’s brutal battle of attrition with John “The Beast” Mugabi, which took place 35 years ago this week, only with more punches, quicker mitts, and no late stoppage to crown a decisive winner. Fans and media were split as to who deserved the decision. 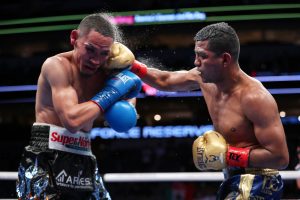 “Chocolatito” gave as good as he got during an unforgettable rematch. Photo by Ed Mulholland/Matchroom

When Gonzalez (50-3, 41 KOs) was asked about his desire to fight a rubber match with Estrada because his Mexican rival won the rematch, the future hall of famer interrupted “I won both of them.”

Estrada, who lived up to his fighting moniker “El Gallo,” of course, believes the official verdict was a just one.

“I think I did enough to win but Gonzalez is a great fighter, it was a close fight,” Estrada said during his post-fight interview. “I didn’t know if I was up or down (on the scorecards going into the late rounds) but I knew I had to fight hard in the final two rounds.”

Both fighters closed the show after a somewhat tactical start that quickly escalated into awe-inspiring middle rounds as fierce as professional boxing gets, and tit-for-tat late rounds that could have gone either way.

“In the last round I gave it all I had, I gave my heart,” Gonzalez said during his post-fight interview. “It was a better fight than the first one.”

Chocolatito might be right about that, which is a miracle given where his career was following a disastrous 2017 that saw him lose for the first time against Srisaket Sor Rungvisai and then brutally knocked out in the rematch. Many thought Gonzalez’s days as an elite boxer were over until he returned to the world-class level last year with his WBA-title winning stoppage of previously unbeaten Kal Yafai.

Still, most fans, media and odds makers viewed him as the underdog against Estrada, who is almost four years younger and has been ranked on most pound-for-pound lists since outpointing Sor Rungvisai in their 2019 rematch. More than a few members of the media, even some from Nicaragua, predicted that the Sonora, Mexico native would score a stoppage in the rematch.

However, Gonzalez, who turns 34 in July, has evolved with age. He’s no longer the pressure-fighting volume-punching wrecking ball he was when he walked Estrada down at 108 pounds. Gonzalez has better ring generalship now. He takes steps back, moves around his target occasionally, even blocks and slips punches here and there. He pivots and turns on the inside, he doesn’t just dig in. But he still lets his hands go, and Estrada, to his credit was able to hang with him for 12 pulse-pounding rounds.

Gonzalez threw 1,317 total punches, according to CompuBox stats. Estrada was right behind him with 1,212. Gonzalez had a slight edge in punch-connect percentages in all three CompuBox categories (total, jabs and power) but Estrada, who looked like the stronger fighter at key points during the fight, was able to attack the body more than his rival.

Now Team Estrada has a decision to make. Do they honor the WBC and face the Mexico-based sanctioning organization’s mandatory challenger, Sor Rungvisai, who looked sharp dispatching veteran countryman Kwanthai Sithmorseng in three rounds on Friday, or do they go for the more lucrative rubber match, which would be the third showdown with Gonzalez?

Hearn made no bones about which fight he’d want to see and promote during the post-fight press conference, bring on Estrada-Gonzalez III said the managing director of Matchroom Sport, “In Los Angeles, after the pandemic, later this year, at StubHub (AKA Dignity Health Sports Park in Carson, California).”

Regardless of who Estrada faces next, three things are clear:

1)Estrada almost as good in rematches as Hagler was. The Marvelous One crushed those who put a blemish on his record – Vito Antoufermo, Bobby Watts, Willie Monroe and Sugar Ray Seals – in return bouts. Estrada has now avenged all three of his professional losses.

2)He’s proving to be a future hall of famer, something Gonzalez clinched when he bested Carlos Cuadras for his fourth world title in a fourth weight class.

3)Regardless of who he faces next – Gonzalez, Sor Rungvisai, WBO titleholder Kazuto Ioka, IBF beltholder Jerwin Ancajas – it’s going to be a quality fight. The junior bantamweight division is one of the deepest in boxing.

And a final note, Hagler’s passing reminded anyone over the age of 40 of how special the 1980s were with the Four Kings – Hagler, Roberto Duran, Sugar Ray Leonard and Thomas Hearns – who engaged in an unforgettable decade-spanning round robin. Some fans have compared the potential of an emerging quartet of lightweight standouts to those legendary fighters, but the truth is that we’ve got this era’s Four Kings with Estrada, Gonzalez, Sor Rungvisai and Cuadras.

Enjoy them all while you can. We’re lucky if rivalries like this come around once a decade.