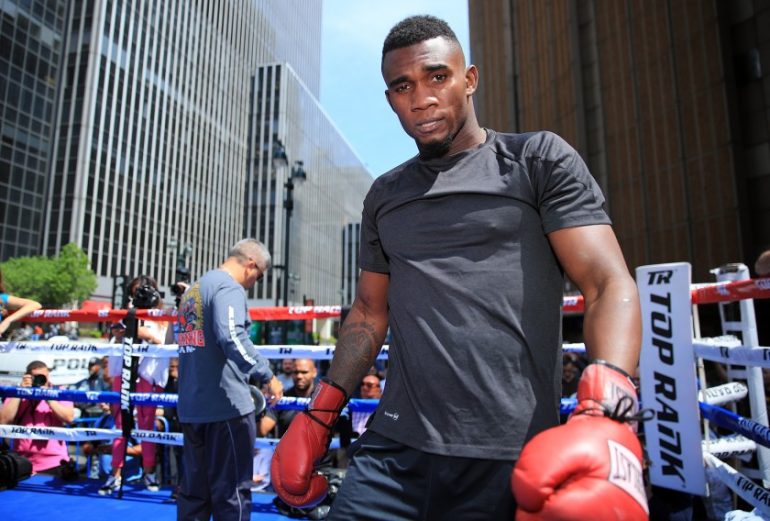 The Medina fight was Adames’ first since losing by unanimous decision to Patrick Teixeira in November 2019. Teixeira would be elevated to WBO junior middleweight titleholder a week later.

Adames struck first toward the end of the opening round, dropping the taller Medina with an uppercut upstairs. Medina would beat the count as the bell sounded to end the round.

As the bout progressed, Adames’ punches began to take a toll on Medina, whose punch output dropped significantly. Adames connected with several hooks and crosses that snapped Medina’s head back. Medina continued to take a beating into Round 6, prompting his corner to step onto the ring apron and tell referee Jose Garrido to stop the fight at 2:31.

Adames, who is trained by Robert Garcia, was pleased with his performance.

“I could have stopped him in the opening round,” said Adames after the fight. “Bryan is a good kid and he tried hard. I wanted to get the rounds in and not get the knockout early in the fight.”

The clash was a grudge match between the two Santo Domingo residents. The southpaw Perez (14-1, 9 KOs) was the more effective fighter early on in the fight, outboxing and countering Valera from distance.

Valera, who is best known for a decision loss to Sullivan Barrera and a disqualification loss to Vyacheslav Shabranskyy, rallied late in the fight by closing the distance and forcing Perez to fight more in the center of the ring. Perez was deducted a point in Round 8 for repeatedly spitting out his mouthpiece but he had accumulated enough rounds to grind out the decision win.

In an upset, bantamweight Salvador Juarez, of Mexico City, scored a knockdown in Round 6 en route to a split decision victory over Leosdan Nuñez (11-1, 5 KOs). No scores were announced as Juarez improves to 14-7-2, 3 KOs.

In a clash of unbeaten heavyweight prospects, Alexis Garcia dropped Amron Sands (11-1, 9 KOs), of Orlando, Florida twice, winning by knockout in Round 2. Garcia, who resides in the Dominican Republic, improves to 10-0, 6 KOs.

Light heavyweight prospect Juan Carrillo of Colombia improved to 5-0, 3 KOs by stopping Venezuela’s Reinaldo Gonzalez (16-3, 9 KOs) at 1:31 of Round 3.