Jessica McCaskill is ready for anything, because she lived through everything 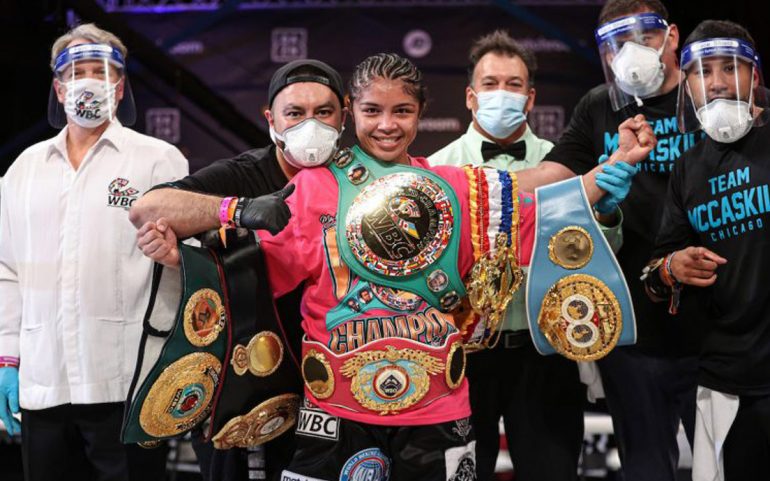 Jessica McCaskill displays the many belts she won by dethroning Cecilia Braekhus on Aug. 15, 2020.
11
Mar
by Joseph Santoliquito

The story seemed already written for Jessica McCaskill before she could walk. Her emotional reservoir started deep and dark, the kind pinned to a note left on the baby in the basket that read, “You do the best you can for her world.”

She lived basically in a musty closet in the back of a red-brick church for a time, subsisting on cereal swirling in a mix of evaporated milk and water. Slight extravagances came with rare trips to a local Ponderosa after Sunday church service. She slept in a rickety crib when she was around 8, listening to a battery-operated radio for entertainment. She had to watch what colors she wore, ever fearful that nearby gangbangers would take a shot at her.

McCaskill was too young to realize she was living in the dark.

On Saturday night, there will be times when the defending IBF, WBA, WBO, IBO, WBC world welterweight titlist will no doubt be in a few dark places in her rematch with the legendary Cecilia Braekhus (36-1, 9 knockouts) on the DAZN (9 p.m. ET/6 p.m. PT) from the American Airlines Center, in Dallas, Texas.

McCaskill knows in the recesses of her mind that she can always draw on where she came from to pull her through.

“I would have these dreams when I was young that I couldn’t fight back, I couldn’t punch, and I didn’t know what that feeling was to fight back,” recalled McCaskill, who will be fighting for the vacant Ring belt. “I dealt with that most of my life. I learned to block a lot of things out. I wouldn’t change my past. It is a part of me. Climbing up, I was so focused on the small steps, that once I got to the top of the ladder, it didn’t seem like I had gotten that high, until you look back.

“You don’t realize it, until the memories of being in the back of the church eating toast for dinner. Now, I can go to my own kitchen and make my own dinner. I can eat out or have food delivered to my house. The contrast between the different lives lived are so wide. It’s important to look back. Some of the harder times in my life came when I wasn’t able to be so emotional, or allow myself to feel.”

Rick Ramos, McCaskill’s noted Chicago-based trainer and manager, recalls seeing McCaskill (9-2, 3 KOs) for the first time dropping a girl he put her in the ring with. That sold him immediately on McCaskill, who’s 36 though she looks like she’s going on 23. 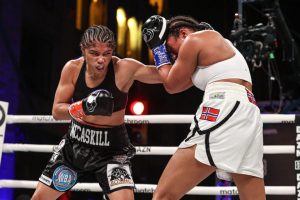 Braekhus got going after a slow start, but McCaskill was always in her face and firing.

Ramos recalled the first time he saw her. Jessica came into his gym wearing basketball shorts and different color sox. He thought she was someone from the street who wandered into his gym.

He didn’t know what to think.

The gym was closed that summer weekday. Ramos was mopping around 6 in the evening. McCaskill, who always wears two different colored sox, approached him about an all-girls show Ramos was putting together.

“I was crabby that day,” recalled Ramos, laughing. “Jessica came in and sat beside the ring and watched me mop. I wanted to push her away. I gave her the whole spiel. I’m hard on newcomers. I was polite with her, and didn’t want to scare her away.

“But I wanted to let her know how serious boxing is. I remember Jessica showed up the next day and I put her in with one of my girls who was pretty good. Well, Jessica beat living shit out of her in a minute. I had to apologize to the girl, because I didn’t know Jessica was that good.”

There was a shadow, however, that cloaked McCaskill. She isolated herself. She would take two buses and a train to Ramos’ gym very day, a 90-minute roundtrip. One time she showed up with her shoes duct taped together. Ramos immediately bought her new sneakers. 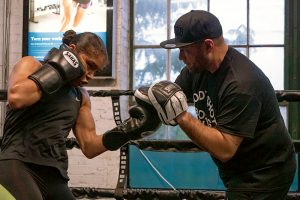 Jessica McCaskill getting work in with her trainer Rick Ramos

She had 17 amateur fights with Ramos and their seven-year relationship began to form. McCaskill was 16-1 with 10 knockouts as an amateur, blowing through everyone she faced.

In time, McCaskill would hang out at the gym. She would mop and fix broken equipment that Ramos didn’t even know how to fix. She put a shelf up one time when Ramos didn’t realize he had a hammer in the gym.

They were two broken people who met each other at the right time and combined to rule a big portion of the womens’ boxing game.

“That’s what happened. I had no one to train and Jessica had nowhere to go,” Ramos said. “Jessica worked so hard that I felt like I owed her and it’s why I tried doing as much as I could for her.

“Little by little, a trust began to build. It took about seven, eight months for her to tell me where she was from and about her background. It all took flight after Jess won her second Golden Gloves, and I brought it up that she turns pro. I told her that I was going to push her fast and hard. No one wanted to deal with Jessica.

“No one wanted to give Jessica a chance. I finally called Bobby Hitz, the local Chicago promoter, and I told him that I had this girl who can punch. I asked him to do me a favor, and bought 125 tickets myself. That was it, Jessica knocked the girl out.

Ramos was so sure of McCaskill that he bet his son’s $6,000 tuition on Jessica’s fight against Alexandria Williams in October 2016.

“I remember my wife going nuts, but I knew Jessica would win. I remember going out telling Jessica, ‘I need this fight!’” Ramos recalled. “Jessica told me, ‘Don’t worry I have it.’ Jessica stopped her in three. There was a lot there with her. Her parents were barely in her life and she’s hard on herself. She’s been through so much, and been to many dark places.

“She survived it. But she probably wouldn’t be where she is if she didn’t go through that hell. Jessica is just getting started. She’s done amazing things, and she has more amazing things to do.

“This is the Jessica that I know. She has a family here. When she fights Braekhus again, she’s not going to have a problem.”

Then Ramos recalled being with McCaskill when she walked into her first house. A twinge of emotion cracked his voice when he told her, “You’re never going to be homeless again.”