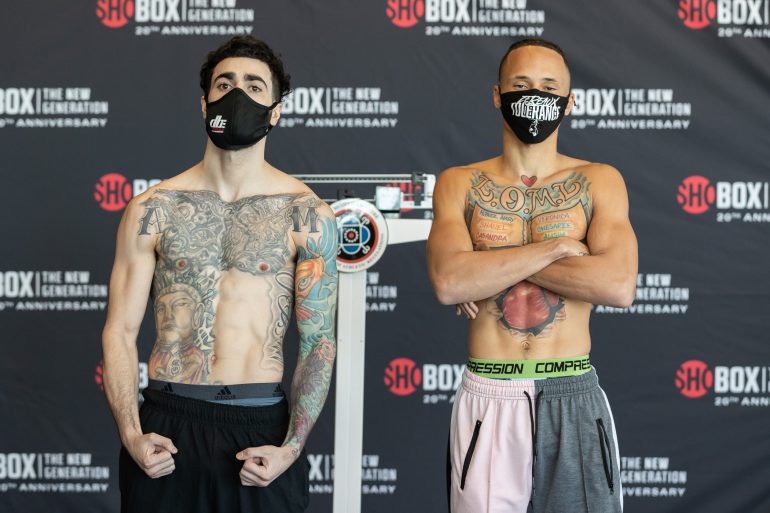 Jeremy Hill has been looking forward to his debut on ‘ShoBox.’ In his opinion, his clash against Steven Ortiz will be his coming-out party.

Hill will square off against Ortiz Wednesday night at the Mohegan Sun Casino in Uncasville, Connecticut. The eight-round lightweight bout will be part of a four-bout ShoBox telecast (Showtime, 9 p.m. ET/ 6 p.m. PT). At Tuesday’s weigh-in, both fighters weighed in at 134.75 pounds.

In the main event, junior welterweight Brandun Lee will square off against Samuel Teah in a 10-round bout.

Hill (14-0, 9 knockouts), who resides in New Orleans, Louisiana, last fought on November 20, knocking out Travis Castellon in round 3. Despite the ongoing COVID-19 pandemic, Hill was able to fight four times last year.

Hill’s activity will likely be an advantage over Ortiz (11-0, 3 KOs), who has not fought since defeating Alejandro Salinas by majority decision in September 2019. Ortiz did have a fight lined up on March 27 of last year against Damon Allen, which was rescheduled to later last summer, but the card was cancelled due to the pandemic.

Both were scheduled to fight Wednesday, but Allen backed out of the fight last month due to a fracture in his right hand during a recent sparring session.

Hill is not fazed by the lack of attention he has received or having fought under the radar up to this point. Despite Ortiz having the more-recognized name in the sport between the two, Hill does not think Ortiz belongs in the same class with him, especially with how active he has been over the last year.

“I don’t see anything in (Ortiz) that makes me worry about him,” Hill told The Ring last Friday over the phone. “I’m not trying to be cocky or overconfident. I saw some tape of him and I hope he’s at his best. That’s all I’m going to say.

“I love to fight so I was ecstatic getting the call to fight on ShoBox. I like to fight. I feel some of these fighters are all hype. They don’t fight to protect their record. You’re a fighter. (COVID-19) pandemic or not. You should be hungry to be in the ring and fight like me. I want to fight and I always asked my manager for any and all opportunities to fight.”

“If I told Jeremy he was going to fight a world champion in two weeks, Jeremy would say yes every time,” said Glenn. “He’s always asking me when he would be able to fight again. I stay busy making sure he stays active, but we hope to wind up with the best promoter later on.”

Floyd Mayweather was ringside for Hill’s last fight, which took place in Daytona Beach, Florida. While having Mayweather ringside may be a motivator to many fighters, Hill stuck to his game-plan against Castellon.

“I heard Floyd was going to the fight,” said Hill, who has stopped seven of his last nine opponents, dating back to March 2019. “Lord knows you hear things but they don’t always come true. “I was more focused on my fight and stuff going on back home. Whether Floyd was there at the fight or not had no real effect on what I had to to do. Travis got caught on the end of my punches and took that loss.”

Hill got a late start in boxing, turning pro at the age of 25. Even as Ortiz had the more-decorated amateur career, Hill believes there are those who may look past his accomplishments.

He has not needed extra people in camp as he keeps his circle, including Glenn, small.

“I may have started late in my career and I don’t have the big names on my resume that some people have fought,” said Hill. “I get the feeling people may overlook my talent or my skill-set.

“I get a kick when I see fighters who have a certain amount of people around with them or in the ring before a fight. They could have as many people in their corner or with them. Guys like Ortiz can have whoever he wants in his corner. The thing with me is that my shine is real and authentic. I’ve shown I’m not a ‘zero.’

Hill’s authenticity has generated a modest following in his hometown of New Orleans. As the city has had to overcome powerful hurricanes, the pandemic, and high crime rates, Hill sees potential in the city.

He may fight his battles alone in a ring, but Hill is proud he can share his success with family, friends, or anyone from the New Orleans area. Hill hopes an impressive victory Wednesday night can go a long way to creating more opportunities for himself and his hometown.

“That is literally what this is about. Regis Prograis did bring attention to the city, but then he left and has split his time between Houston and Los Angeles. I want to carry the city through thick and then. If I win, the city of New Orleans wins.

“The city has had a lot of great fighters that have fallen short. I don’t want to be a fighter with the would’ve, could’ve, should’ve attitude (later in life). I’m not going to do that. I want to shine for my city. This is for everyone in the city.”