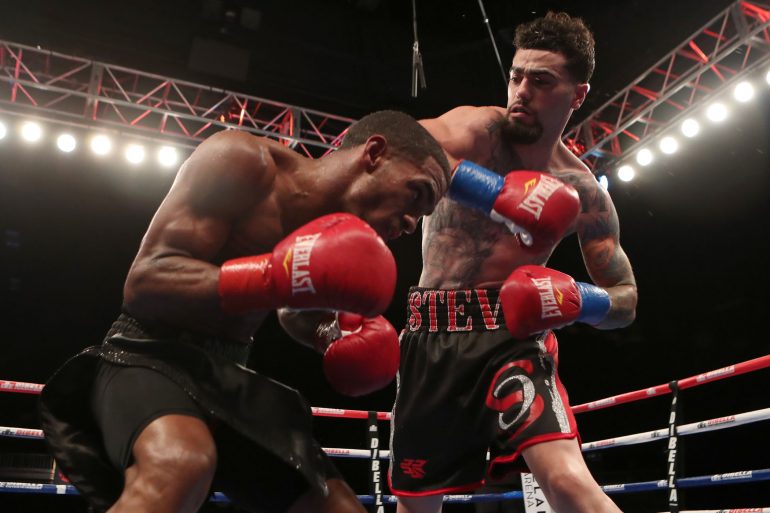 Steven Ortiz is looking to punish Jeremy Hill as he did Wesley Ferrer as he did in this September 2018 fight (Photo courtesy of Showtime).
09
Mar
by Joseph Santoliquito

The clock is ticking and 27-year-old Steven Ortiz knows it. The Philadelphia lightweight is going to get one of those rare chances to appear on national TV Wednesday night (9 PM ET/PT) as part of Showtime’s ShoBox: The New Generation show from the Mohegan Sun Arena in Uncasville, Connecticut.

Ortiz (11-0, 3 knockouts) will be going against replacement Jeremy Hill (14-0, 9 KOs) in an eight-round lightweight battle under the Brandun Lee-Samuel Teah 10-round junior welterweight main event.

Due to the COVID-19 pandemic, this will mark the first time Ortiz will be fighting in 18 months. Hill, who is 6-foot, fought four times in 2020.

“I don’t know too much about Hill, but I know he’s tall and a fundamentally sound boxer, he’s a good fighter,” said Ortiz, who is 5-foot-10 and was last on TV in 2018. “The pandemic has been a huge challenge for me, but at the same time, I could say I’ve been more consistent and I kept working.

“There were a lot of fights offered, but not a lot of fights that came through. This is the longest layoff of my career. I am 27. I know how important this is. I sell cars and that helped pay the bills.”

Ortiz began fighting when he was 13. So being away from the ring gave him a greater appreciation of boxing.

“I had big opportunities presented before the pandemic and they would fall through, so I stayed ready,” Ortiz said. “I’m more anxious to get in the ring and go in there and be smart. Hill is a tall fighter who I know I’ll have to frustrate by keeping him out of range with my jab.

“I would like to fight at least four times this year, starting Wednesday night. I feel in great shape and I feel ready.”

Ortiz was originally slated to take on fellow Philadelphia fighter Damon Allen (16-1-1, 5 KOs), but that fell through when Allen was forced to withdraw after suffering a fractured right hand in sparring.