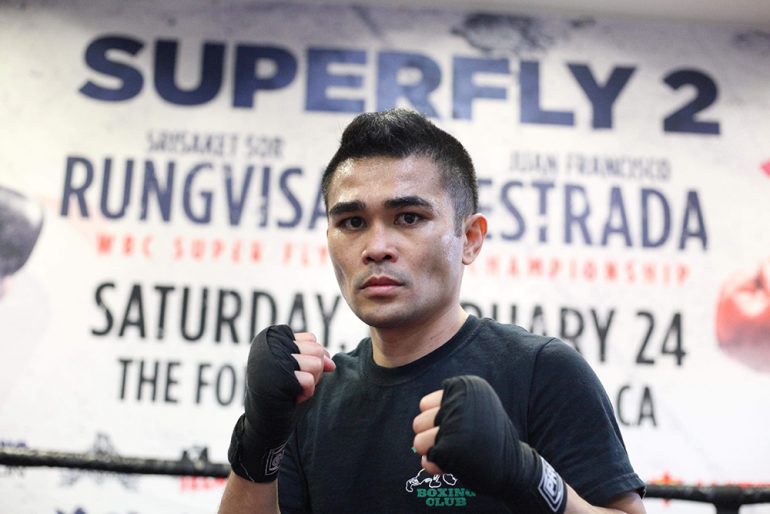 Former two-weight world titleholder Brian Viloria will be an interested observer when The Ring and WBC junior bantamweight titleholder Juan Francisco Estrada and WBA counterpart Roman Gonzalez meet in their eagerly anticipated unification fight at the American Airlines Center in Dallas on Saturday.

Viloria, who is now retired and working as a trainer, shared a ring with both men. He lost his WBA and WBO flyweight titles to Estrada via 12-round split decision in April 2013 and made a bold attempt to dethrone the then-unbeaten Gonzalez in a WBC 112-pound title bout before being stopped in nine rounds in October 2015.

The former titleholder is excited to see his old rivals fight for the second time.

“I had the honor of being in the ring with both of those champions,” Viloria told The Ring. “I know [the rematch has] been a while in the making. The first fight [in November 2012] was very close. I was on the same card [in a unification bout with Hernan Marquez]. I didn’t really get to see it live because I was still in the locker room, but I got to see the replay.

“It was a give-and-take fight. A lot of people would argue Estrada won, but I feel like Chocolatito’s pressure was what won him that fight.” 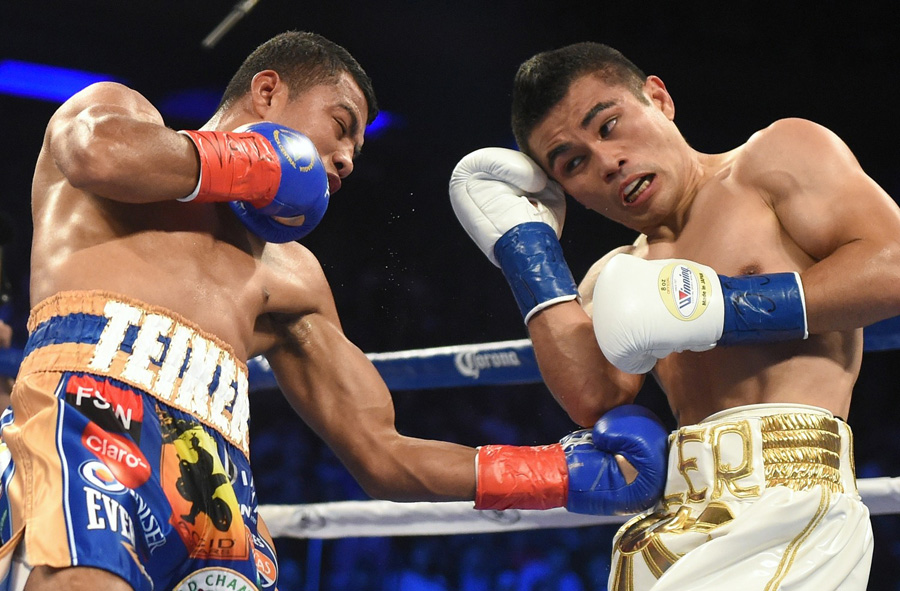 Viloria (right) and Gonzalez go at it. Photo by Naoki Fukuda

Viloria feels Estrada needs to be more aggressive than he was in the first fight, which took place at the Sports Arena in Los Angeles.

“[Estrada] has to engage a little bit more,” explained Viloria. “When he did engage, he kind of pushed Chocolatito back. In the first fight he was moving around a little bit too much and wasn’t engaging as much as he should have. His experience from the last fight to where he is now has increased a lot more. I know it’s a strategy that favors Chocolatito, but if Estrada stays in the pocket and catches him with a good shot that will slow down Chocolatito’s output and give him a better chance. He also has to move around and try to pick his shots, pick his angles, pick his battles in between those barrages. If he makes Chocolatito miss and makes him pay, he should be able to win the fight, but that’s going to be a hard task for 12 rounds.”

Viloria feels that Gonzalez has to be the best version of himself to emerge victorious.

“He needs to keep putting the pressure [on Estrada],” he said. “He throws punches in bunches and I think that is going to eventually take down Estrada. That’s what he did in the first fight; constantly moving forward, breaking his opponent down.”

In terms of the champion’s tactics, Viloria believes that Estrada has to be cerebral and weary of Gonzalez’s aggression.

“I think Estrada got caught with a lot of uppercuts in his last fight,” said the former titleholder. “If he just stands straight up with an earmuff defense, Chocolatito will catch him with uppercuts. He’s very dangerous with the uppercut, coming off the jab. Estrada can’t get trapped too much on the ropes and needs to keep the fight in the center of the ring, where he does a much better job.”

Viloria also feels that Gonzalez has to be careful of the Mexican’s counterpunching ability.

“It’s the way Estrada counters; his looping right hands, the way he sets up his shots by moving around and getting into angles,” explained Viloria. “Try not to get too flat-footed on him. Estrada is a great mover, he reminds me of a [Juan Manuel] Marquez. He uses his reach very technically.”

Viloria broke down each fighter in 10 categories.

JAB
Gonzalez: Both guys have great jabs. I think Chocolatito’s jab is used more to set up his other shots – his uppercuts, his right hand – it gets him in position. He uses it more as an offensive weapon. Estrada uses his jab a little bit more systematically to stymie his opponents forward movement. I think he uses it to slow down attacks and it’s more of a defensive jab. If I had to choose, I’d give it to Chocolatito for using the jab to set up other shots. I think that’s a better way to win a fight, rather than using it as a defensive mechanism.

DEFENSE
Gonzalez: They both have good defense. Estrada uses his footwork for his defense. He doesn’t let you set on your shots. Every time you try to set your shots and throw some combinations, he’s not in front of you anymore. Chocolatito’s head movement is constant, he comes in, uses his shoulder defense and gets into a high guard. He does quick pull-backs, just enough for you to miss your shots and he comes back with counters: uppercuts or overhand right hands. I think Chocolatito’s style is better. It’s very efficient, it doesn’t use up a lot of your energy, which is important in long duration fights. The way Chocolatito uses his defenses, it’s nice and tight, he keeps a high guard. He’s very active, seeing where you’re throwing shots, either parrying, or slipping or doing a pull-back counter. I think Chocolatito has a better defense.

HANDSPEED
Gonzalez: I have to give it to Chocolatito because he keeps his punches very compact and tight. He shoots from the chin or hip and doesn’t have that big, wide pull-back Estrada does, so [the punch] reaches its target real quick.

FOOTWORK
Estrada: They both have great footwork. I think Estrada because of the way he can constantly move and fire off shots. He goes left and right and doesn’t allow you to set on your shots. As soon as you try to throw four, five-punch combinations, he gets out the way. With Chocolatito, he’s constantly moving forward, he tries to cut down the ring. Estrada is a lot more explosive and quicker on his feet.

SMARTEST
Gonzalez: He’s a master of ring generalship. He knows how to break the opponent and set up a shot. He knows how to assess the situation, he’s really systematic and patient. He doesn’t rush a lot of things, he waits and assesses the problem, round-by-round; and [establishes] what route he has to take to beat you. Once he figures you out, he’ll just go for it.

STRONGEST
Gonzalez: It was hard for me to move Chocolatito. He knew how to plant his feet and his space was really solid. I tried to keep him off me by throwing heavy, hard shots, but it didn’t seem like he was budging at all. He knew how to roll off the punches and took a lot of power off the great shots. [Gonzalez was] very physical. I couldn’t get the same feeling with Estrada because he moved a lot.

POWER
Gonzalez: Chocolatito was the only one who put me down. His technique and the way he puts torque on his punches, it wasn’t wide, it was really compact, short and solid. He not only throws a lot of shots, but he throws crisp hard shots with power.

CHIN
Estrada: Both men have tasted the canvas. Estrada got knocked down against Cuadras and Chocolatito got knocked out by Sor Rungvisai. The only thing that was different was Estrada got up to knock his opponent out. I saw the wars between Estrada and Cuadras, and the way he was taking shots and coming back with his own, I would give it to Estrada.

SKILLS
Gonzalez: They’re both technical in their own way. Estrada can move, he can fight going backwards, he can bang with you, and he has the chin to take your shots. Chocolatito is a master at breaking down opponents. He knows how to be efficient and constant with forward movement and puts [together] punches in bunches that’ll break down any fighter’s will and spirit. Overall, if I had to choose one on skill, I would have to go Chocolatito because of the way he marries both defense and offense. He’s able to control the whole fight the way he wants to and knows how to switch up his timing.

OVERALL
Gonzalez: At this stage, I would have to say it’s a toss-up. You could argue Estrada has up-hill trajectory in terms of his skill and overall boxing. You could also argue that Chocolatito has been able to maintain his level for such a long time. It’s a toss-up, but I feel Chocolatito has it all at this point. He’s gone through being knocked out and came back and resurrected his career again with a couple of championship wins. Overall, his constant offensive output, efficiency, defense, accuracy and ring generalship put him just above Estrada.

When all is said and done, the ex-champion gives the Nicaraguan star the edge.

“I think Estrada has gained enough confidence for him to stand toe-to-toe with Chocolatito,” said Viloria. “Running didn’t help him in the first fight, so I think Estrada’s going to spend a little bit more time in the pocket and try to break Chocolatito down. The fight is going to start quick and stay at that tempo for eight to 10 rounds and Chocolatito is going to come in and take control. I think Chocolatito will get the unanimous decision this time.

“This is why you fight because you never know what they pick up during training camps, what they learn, what bad habits they shed, how they reinvent themselves. This is why I’m excited to watch this fight.”

Estrada-Gonzalez 2 plus world championship undercard action will be broadcast live on DAZN in the U.S. and in the U.K.

ROMAN GONZALEZ AND THE TITLE-REIGN KINGS