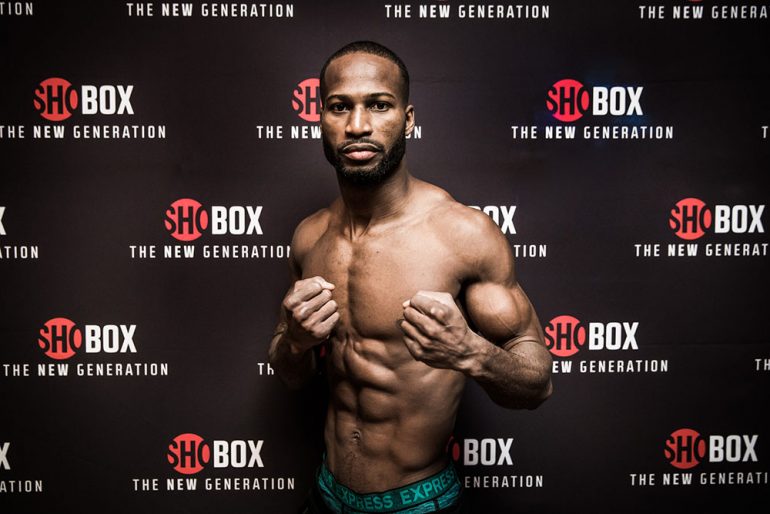 “But this time, he’s going to be on the receiving end,” Teah told The Ring.

The two will square off in a scheduled 10-round contest Wednesday on a ShoBox: The New Generation main event at Mohegan Sun Casino in Uncasville, Connecticut. The main card is scheduled to begin at 9 p.m. ET/ 6 p.m. PT.

Born in war-torn Liberia and raised initially in Ghana at a refugee camp, the 33-year-old Teah (17-3-1, 7 knockouts) moved to Philadelphia when he was five years old. Although he has suffered a trio of losses on his resume, Teah has never been knocked out.

And while his KO ratio isn’t exactly eye-catching, Teah remains confident that not only will he hand the talented prospect his first loss, but he will also be the first to knock him out.

“They’re trying to keep his 12-fight knockout streak going, and I’m going to help him out with that,” he stated. “But I’m going to be the one doing the damage.”

The unbeaten Lee has finished 19 of his 21 opponents within the first three rounds. But Teah is not impressed by the numbers.

“He hasn’t faced the level of opposition like myself,” he added. “He is very, very susceptible to being hit with the jab.”

Lee (21-0, 19 KOs), who started boxing at the age of six, had an outstanding amateur record of 181-9, including four junior Golden Gloves championships.

But as a pro, Teah believes that Lee has yet to face anyone who has exemplified that they can force him to box off his back foot.

“Lee isn’t the type of boxer that can fight going backward,” Teah continued. “I’m planning to exploit all of that on Wednesday night.”

And if he has to make it an ugly fight, so be it.

“I plan on exploiting him. He relies too much on that right hand,” Teah said. “We’ll beat him down with the jab and make it a rough fight if need be.”

In summary, Teah’s game plan is to outbox Lee and demoralize him to a point before going for the knockout.

Even before signing up to fight Lee, Teah, the IBF No. 10-ranked 140-pounder, believed he was about three fights away from fighting for a title.

“After beating Lee, I should be ready to fight for a title within the next fight or two, if not the very next fight.”