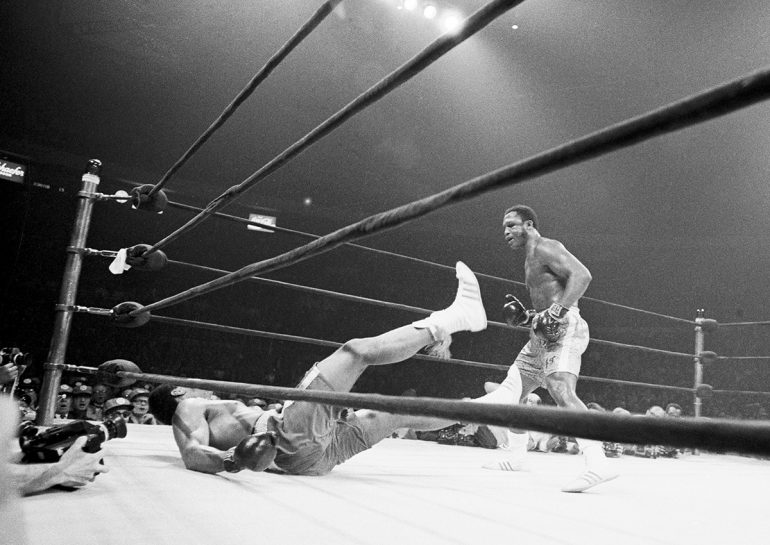 The knockdown that shocked the world.
05
Mar
by Joseph Santoliquito

On a frigid Monday night, on March 8, 1971, 18,000 fans jam-packed Madison Square Garden with the sense that they were about to witness history. A half century later, the rest of the world knows that they did.

This Monday will mark the 50th anniversary of the Muhammad Ali-Joe Frazier “Fight of the Century” showdown.

ESPN appears to be going all out for the occasion, giving fans a chance to experience one of the most iconic fights in boxing history when ESPN on ABC debuts Muhammad Ali vs. Joe Frazier 50th Anniversary Special this Sunday, March 7, at 2 p.m. ET.

The two-hour program will also air on ESPN, ESPN2, and ESPNEWS between Sunday and Monday, March 8. The entire Ali-Frazier trilogy is available on demand on ESPN+.  ESPN Deportes will also re-air the entire trilogy in primetime on Sunday, March 7.

Ali-Frazier, or Frazier-Ali, met for the first time in a transcendent boxing main event that could only be named “Fight of the Century.”

According to the ESPN release, “Ali sought to reclaim the title he lost nearly four years prior when the state athletic commissions stripped him of his title after refusing induction into the army. Until this fight, no unbeaten fighters had ever fought each other for the heavyweight title.

“The ‘Fight of the Century’ will be presented to our viewers in a brand-new way,” said Norby Williamson, Executive Vice President, Event and Studio Production & Executive Editor, ESPN. “This was one of the most important and impactful sports events ever and fans now have the chance to experience it as never before.

“Fans will be thrilled to see the results ESPN’s boxing production team achieved in Muhammad Ali vs. Joe Frazier 50th Anniversary Special through the intricate digital remastering of every second of both the original footage of the entire fight and the original ABC Wide World of Sports broadcast. For the fight, this process included some 461 shots in which graininess was removed, color was corrected and enhanced, and images were sharpened.”

ESPN put together a team of producers, editors and reporters also worked on accompanying stories to further enhance the fight broadcast and transport fans to 1971.

These included perhaps one of the more vivid and interesting moments in the great rivalry, which appeared to be a setup for a confrontation on Howard Cosell’s ABC show.

Instead of Cosell sitting in between Ali and Frazier, the producers had the two fighters sitting next to each other. Once again, Ali continued taunting Frazier, “Yeah, boy,” as Ali referred to Frazier during their breakdown of the fight. Ali did admit he made a lot of mistakes during the course of the fight, that he clowned too much and “learned his lesson.”

That seemed to ignite everything when Ali told Frazier “that shows how ignorant the man is.”

Ali-Frazier I had not been aired on U.S. television in nearly 30 years (it previously aired in August 1991) until it was shown on ESPN last June. Ali and Frazier met again on Jan. 28, 1974 — with no titles at stake — in what was called the “Super Fight II,” also at MSG. On Oct. 1, 1975, Ali and Frazier fought once again for the heavyweight championship in the “Thrilla in Manila” at the Araneta Coliseum in Cubao, Quezon City, Philippines.