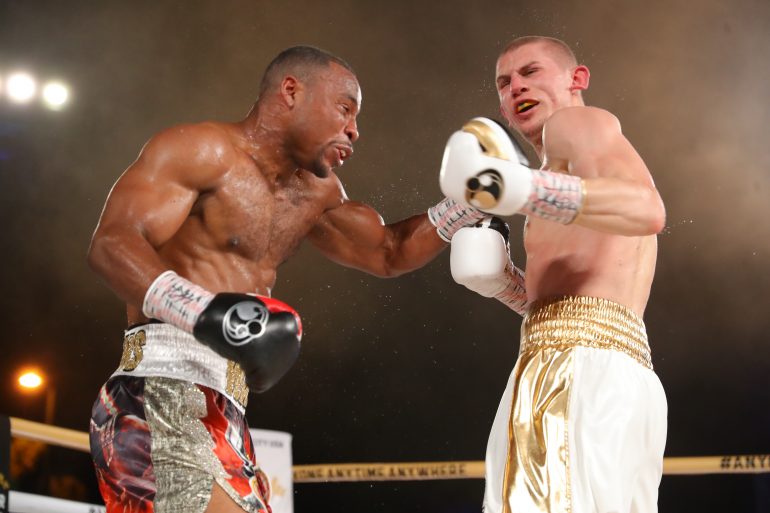 Brandon “Cannon” Adams handed Serhii Bohachuk his first professional defeat tonight, scoring a come-from-behind TKO win late in the eighth round. All three judges had Bohachuk well ahead when Adams (23-3, 15 knockouts) backed the Ukrainian to the ropes and dropped him with a massive left hook. Bohachuk (18-1, 18 KOs) made it to his feet but was in bad shape, promoting referee Ramon Pena to call off the fight.

“I just had to dig in deep and understand that it was me against them,” Adams said after the fight. “I had to embody that and use all the strength that I had to connect one of those punches from the cannon.”

Both fighters were slipping and sliding all over the ring, which was soaking wet in the humidity of the Puerto Rican night.

“It was really hard to move. I’m an explosive fighter so I try to take advantage of that. But I couldn’t tonight because I didn’t have my legs under me. But the minute I was able to land clean punches, I just had to do what I had to do.”

Adams started well in the early rounds, utilizing lateral movement mixed in with effective body work. Problem was, some of his punches were straying low. Referee Ramon Pena warned him several times for low blows. In the third round Adams landed a combination right on the beltline, with the last punch connecting well below it. Pena took a point and the momentum of the fight seemed to change immediately afterward.

Bohachuk never stopped coming forward. He cut off the ring well and began pushing Adams back in the middle rounds. The California native’s corner repeatedly complained to Pena that Bohachuk was pushing him down with his forearms, but, in fairness, Adams was rushing in with his head. It was a rough and tumble affair with both men having moments, but it felt like Bohachuk was pulling ahead as the junior middleweight bout moved into the late rounds.

Then suddenly, as it can only happen in the sport of boxing, everything changed in an instant.

Late in the eighth, Adams caught Bohachuk with a hard left hook upstairs, followed by a left-right, and had the Ukrainian reeling back into the ropes with his arms down. A follow up left hook to the head landed flush and immediately sent Bohachuk crumbling to the canvas. A moment later, the fight was over and Adams had scored an emphatic knockout victory in the “Ring City USA” main event on NBC Sports Network.

@BATheCannon finishes the night with a vicious KO!!!

“He was a tough guy man,” Adams said, “and I appreciate the fight. He brought another side out of me that I knew was in me, but the people got to see it tonight.”

This bout was originally scheduled to take place last December, but had to be postponed due to Bohachuk testing positive for COVID. It’s back to the drawing board now for Bohachuk, while the veteran Adams moves on to bigger and better things.

In the TV opener, Puerto Rican Danielito Zorrilla improved to 15-0 (11 KOs) with a split decision win over Ruslan Madiyev (13-2, 5 KOs). This junior welterweight bout was scheduled for ten rounds, but ended abruptly in the eighth when Zorrilla claimed he could not continue after a foul.

Joel Diaz, Madiyev’s trainer, advised his fighter to pass on the Zorrilla fight, feeling that his fighter wouldn’t get a fair shake in Puerto Rico. Perhaps he was correct. Puerto Rican referee Janny Guzman seemed to be all over Madiyev from the opening bell, warning him repeatedly and breaking the fighters whenever they got close. The only chance for Madiyev to win was for him to make it rough, and that’s just what he did.

Zorrilla, dealing with nonstop pressure from Madiyev, began clinching and leaning on his opponent in the middle rounds. In the fifth, with both fighters clinched and working on the inside, Madiyev landed an accidental shot to the back of Zorrilla’s head, prompting Guzman to deduct a point. Undeterred, the Kazakhstan native continued to press the action and performed well over the next few rounds. It felt like a close fight heading down the stretch. Zorrilla was visibly winded and the momentum had swung to Madiyev.

In the eighth round, once again with the fighters clinched and jockeying for position on the inside, Madiyev tapped Zorrilla on the back of the head. Zorrilla immediately turned, walked to his corner and took a knee. Moments later, Guzman stopped the fight and the scorecards were read. One judge scored it 76-73 for Madiyev, overruled by scores of 77-75 and 77-75 for Zorrilla, who ended up being taken to the hospital for observation. It was an unsatisfying finish for what had been an interesting bout. Perhaps they should run this one back.

Michael Montero can be found on social media via @MonteroOnBoxing. His podcast “The Neutral Corner” can be seen every Monday on TheRingDigital YouTube channel, and heard on audio podcast platforms around the world