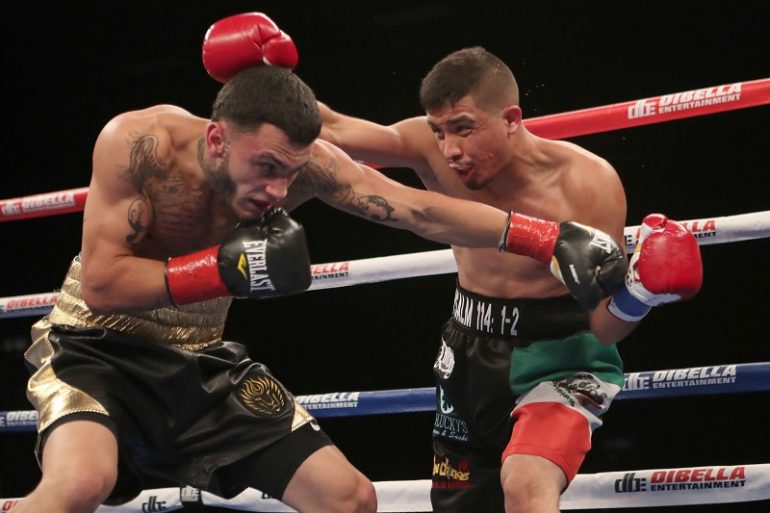 Junior lightweight prospect Misael Lopez will square off against Jordan White on March 10.

The eight-round bout will take place at the Mohegan Sun Casino in Uncasville, Connecticut and will precede the main event bout between unbeaten welterweight Brandun Lee and Samuel Teah. Both fights, along with two more, will be part of a ShoBox telecast (Showtime 9 p.m. ET/ 6 p.m. PT).

The popular ShoBox series is celebrating its 20th season on the premium network.

“Our March 10 event, from top to bottom, perfectly represents the philosophy that the series has set forth to accomplish during our 20 years in boxing,” said Gordon Hall, executive producer for ShoBox: The New Generation. “The full spectrum of prospects will be on display in this event from coming-of-age newcomers to a fighter on the doorstep of a world championship fight.”

“All eight fighters competing on March 10 at Mohegan Sun will be tested, and that is exactly what the ShoBox series is all about,” said DiBella. “I’m proud to promote such an evenly-matched event from top to bottom.”

Lopez (11-0, 5 knockouts), who is originally from Agua Prieto, Mexico and now resides in Denver, Colorado, last fought in October 2019 in Houston. The outcome of the fight was a one-sided victory for Lopez, but the Texas Commission changed the result to a no-contest when the victor tested positive for cannabis.

The 24-year-old has fought on a ShoBox telecast before, defeating James Wilkins in a clash of unbeaten fighters in September 2018.

White (10-1, 8 KOs), who resides in Washington, DC, stopped previously-unbeaten Rolando Solis in his last bout on February 28 of last year. The 23-year-old has won his last six bouts, five by knockout, since losing by unanimous decision to Adam Lopez in May 2017.

Also on the March 10 card, Steven Ortiz will face Jeremy Hill in a clash of unbeaten lightweights.

The 27-year-old is promoted by DiBella and has defeated three unbeaten fighters.

Hill (14-0, 9 KOs) dropped Travis Castellon multiple times before ending matters in the third round of his last bout on November 20. Despite the ongoing COVID-19 pandemic, the New Orleans resident fought four times in 2020, winning two of those by knockout.

In the opening bout of the telecast, hard-hitting lightweight Victor Padilla (8-0, 7 KOs), who is originally from Puerto Rico and now resides in Berlin, New Jersey, will square off against Philadelphia’s Thomas Velasquez (10-0-1, 6 KOs) in an eight-round bout.