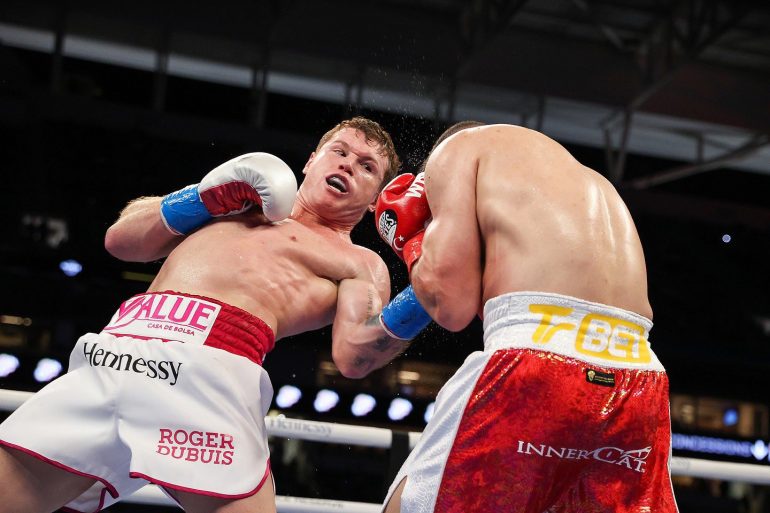 “I come to win,” he said. “I come to make history, and I have the best trainer in the world.”

Alvarez went to the body early and often, attempting to lower Yildirim’s high guard. It wouldn’t take long for him to break through.

A hard one-two right on the button dropped Yildirim (21-3, 12 KOs) about a minute into the third round. The game Turkish fighter rose to his feet, but was visibly hurt. Rather than pouncing on his opponent, Canelo simply took his time. He went right back to the body, then began mixing in shots up top.

The moment that secured the win for Canelo 💥 pic.twitter.com/mxofve7qMj

Rights, lefts, uppercuts – it was all working for the pound for pound king of boxing. Yildirim finished the round, but subsequently retired on his stool before the start of the fourth. It was a wise decision. Despite his best efforts, Yildirim was simply in the ring with a fighter who was levels above him. Things were only going to go downhill from there. 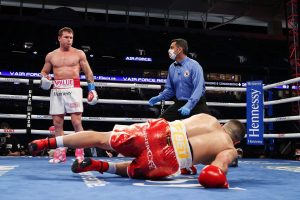 After the fight, during the in-ring interview with DAZN commentator Chris Mannix, Matchroom Boxing kingpin Eddie Hearn officially announced Canelo’s next move. He will fight WBO titleholder Billy Joe Saunders on May 8.

“He’s a very difficult fighter, and he has a championship,” Canelo said. “He will talk but I’m a mature fighter, I know how to control myself. All I need to do is get in the ring and make history. I don’t want to be equal to anyone. I respect everyone but I want to make my own history.”

The fight between Alvarez and Saunders will unify nearly all of the super middleweight titles, leaving IBF titleholder Caleb Plant as the odd man out. The undefeated, yet largely unproven, American could find himself in the “Canelo Sweepstakes” later this year, should the Mexican be successful against Saunders in May.