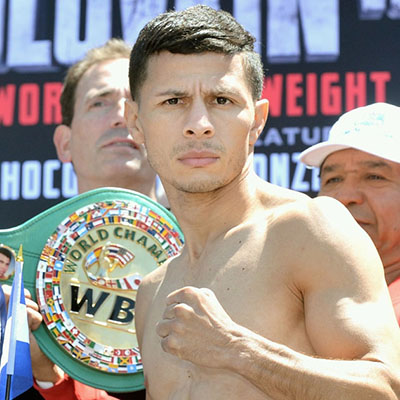 The Puerto Rican started fast and never let up, stalking his opponent from the opening bell. It was target practice for Arroyo against his lesser-experienced opponent. Rodriguez (27-3, 13 KOs), a last-minute replacement after WBC flyweight titleholder Julio Cesar Martinez withdrew from the fight due to injury, showed toughness throughout, but simply had no answers.

In the fourth round, Arroyo landed a barrage of body punches with Rodriguez on the ropes, dropping the Mexican to the canvas. Rodriguez made it to his feet, but it felt like it was only a matter of time before the fight would be over. Arroyo closed the round strong and Rodriguez was getting beat up. In the fifth, with Arroyo continuing his assault, the Mexican’s corner did the right thing and stopped the fight.

Arroyo now holds the WBC interim title and will face Martinez as soon as The Ring’s No. 2-rated flyweight has recovered from his right hand injury. Arroyo, The Ring’s No. 10-rated flyweight, is a battle-tested veteran who’s seen it all in the ring. The Olympian has faced the likes of Amnat Ruenroeng, Roman Gonzalez, Carlos Cuadras and Kazuto Ioka. Whenever his fight with Martinez finally does happen, it will be a fantastic match up.

Rodriguez was fighting outside of Mexico for the only the second time in his career. In 2018, he challenged another Puerto Rican, Angel Acosta, for a junior flyweight title in Las Vegas and came up short.