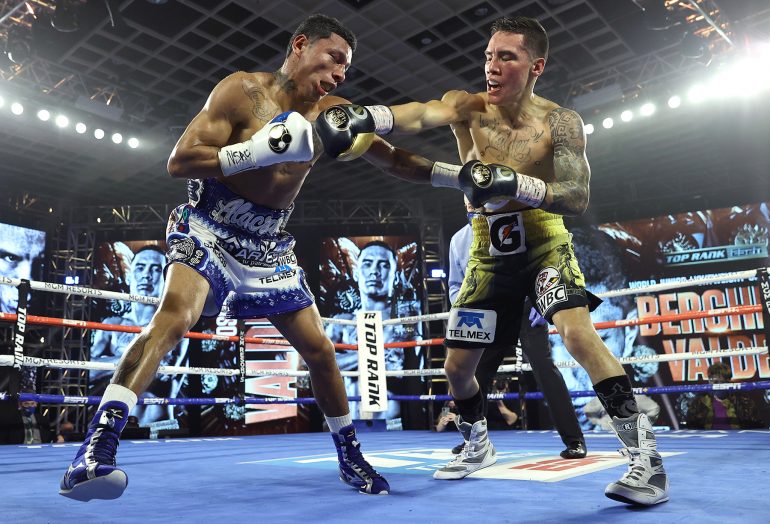 And, as the old-timers say, there’s a reason they fight the fights. We, the observers, don’t know what’s going to happen until the bell rings. We knew Berchelt-Valdez was going to be an entertaining fight, but few believed that Valdez would drop, outclass and brutally KO “El Alacran.”

Regardless of who they thought would win the Mexican showdown, the Ring Ratings Panel, which did not rank Valdez at junior lightweight following the Nogales native’s first two bouts at 130 pounds (TKOs of Adam Lopez and Jayson Velez), was mightily impressed with his performance against the heavily favored Berchelt.

“Valdez scored a career-best win and early contender for Knockout of the Year when he KO’d the bigger but slower and more ponderous Berchelt in the 10th round,” said panelist Anson Wainwright. “I think I’ll go with Gervonta Davis at No. 1 and Valdez No. 2. For my money Shakur Stevenson is the best 130 pounder in the world, but he has to prove it in his upcoming fights.

Panelists Michael Montero and Martin Mulcahey suggested that Valdez assume Berchelt’s prior position at the top of the junior lightweight rankings.

“Valdez should be No. 1 at 130 pounds, he just beat our current No. 1 in quite decisive fashion,” said Montero. “Tank’s best win was against (Jose) Pedraza, and that was FOUR years ago. His last two fights were against faded, bloated, smaller men. It’s been showcase after showcase.

“Davis has all the talent and potential in the world but rating him No. 1 would be rewarding mediocrity in my opinion. Valdez just took on a much larger, heavily favored opponent in their physical prime and won big. Tank has never done that. He has however missed weight multiple times. Oscar has never done that.”

“I jumped off the Oscar Valdez bandwagon too soon thinking he had taken too much punishment while Berchelt was an expert at dishing out punishment. Glad to be proven wrong and looking over Anson’s suggestions I have no problem with them but also not sure if Berchelt will stay in the division either after that shock to the system.

“Valdez should be our No. 1 given he beat our top junior lightweight and has previous good wins with guys who came in at a higher weight class (looking at you Scott Quigg).”

“I’ll vote for Davis at No. 1 at this weight because he’s been here longer and achieved quite a bit,” said Gray. “Valdez to No. 2 works for me. Those two for The Ring title would be a dream, but politics will prevent it.”

Super middleweight – Fedor Chudinov drops from No. 7 to No. 9 after being held to a 10-round draw by veteran Isaac Chilemba.

“Chilemba is one of the best gatekeepers in boxing,” said Wainwright. “I could see us dropping Chudinov a place, he didn’t look great in his previous fight. We could bring Chilemba in at No. 10. However, I think we should stick with (Edgar) Berlanga in that spot.”

“Always appreciate Chilemba and what he brings. It is remarkable that he is 32 years old. I thought he was older in my Rolodex-age mind. I say drop Fedor to No. 9. He runs hot and cold at best and consistency is a top trait for rankings. There’s not much depth in the division to see someone else in.”

Junior welterweight – Kiryl Relikh exits the rankings due to inactivity. Robert Easter Jr., who won a wide 12-round decision over Ryan Martin, enters at No. 10.

“Frankly, Easter is more a threat at 140 pounds than his buddy, Adrien Broner,” said Wainwright. “Relikh has been inactive since losing to Regis Prograis in April 2019. I think we can take him out and bring Easter in at No. 10. If Relikh fights again he can re-enter, but this keeps things a little relevant.”

Junior lightweight – Valdez enters the rankings at No. 2. Berchelt drops to No. 4.

Strawweight – Vic Saludar remains at No. 6 after edging Robert Paradero by 12-round split decision.

“Wallin is showing he can hang with a top-10 guy and beat lessers, but I agree with Anson, I do not think he has proven the ability to BEAT anyone in top 10, so he stays just outside for now.”

“Avanesyan wouldn’t be denied and showed there is more to boxing than flash combinations as he grinded down and beat-up Kelly in six rounds,” said Wainwright. “It was a really good performance and win for Avanesyan who is still just outside the top 10 in a packed division.

“Avanesyan showed he more than qualifies as one of the sport’s top gatekeeper, and worked the game plan he stated from beginning to perfection. I would rank Avanesyan above Broner, who again did the least amount of work possible and still get a decision win.”