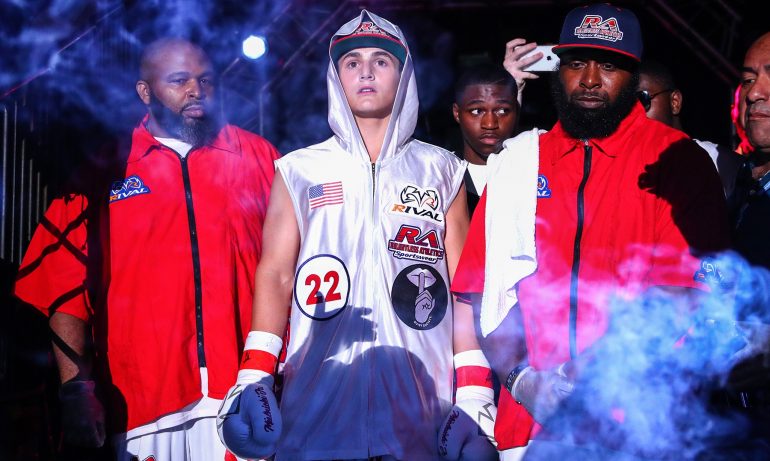 The unbeaten 18-year-old (7-0, 4 knockouts) has faced little resistance thus far in his professional career, but Noe Lopez promises to push the 18-year-old hard when they meet at Shrine Exposition Center in Los Angeles.

The bout, which will mark the first eight-round contest for both fighters, takes place on the undercard of the WBC super middleweight title eliminator between former titleholder Anthony Dirrell and Kyrone Davis.

But the New Jersey-based pugilist is approaching the fight cooler than the other side of the pillow.

“He’s probably my toughest opponent to date, but nothing concerns me (about Lopez),” he stated. “I’m going to go in there, by myself, and everything else will take care of itself.”

When asked about how he would like his career trajectory to be moving forward, Mielnicki, who expects to fight four times this year, said there is no need to rush.

“We’re in no hurry,” he told The Ring. “I’m still 18 years old. We’re going to take our time and keep learning.

“Our main focus is Noe Lopez on February 27th, and after that, we’ll figure out what’s next. All the fans should tune in to FOX.”

We also pressured Mielnicki to answer whether or not he would be willing to accept a bigger fight on short notice. For instance, in June 2001, then-one-division titleholder Manny Pacquiao stepped up to face junior featherweight titlist Lehlo Ledwaba on two weeks’ notice, scoring a sixth-round stoppage in a fight that set him on a path to superstardom.

“For right now, we’re in no rush,” he continued. “I do believe in taking risks, and you can’t be great without taking those risks.

“But for me, I’m 18 years old. We’ll take it step by step, and if an opportunity does come, we’ll take advantage of it.”

But Lopez (10-3-1, 4 KOs), of Houston, Texas, who is also a full-time mechanic, spoke to The Ring earlier this week and said his goal was to stop Mielnicki in the later rounds.

But not if “White Magic” has anything to say about it.

“I’m in the best shape of my life,” Mielnicki said. “Training camp has been going very well.

“Everything is going well. Now, we’re just ready for February 27th. I will be victorious.”