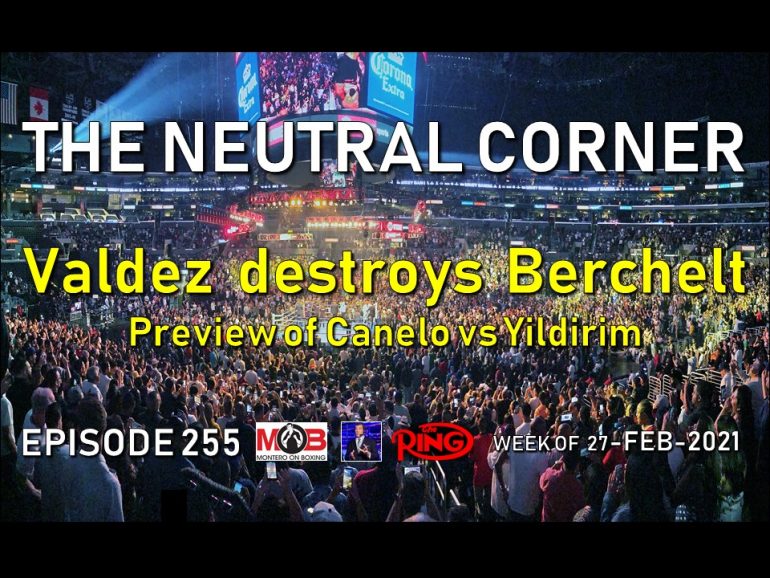 On episode 255 of The Neutral Corner boxing podcast, host Michael Montero reviewed a loaded weekend of fights from around the world.

There were three major fight cards on Saturday, February 20.

In London, David Avanesyan served Josh Kelly his first loss as a pro, dropping him twice before Kelly’s corner stopped it in the sixth round. Their welterweight bout headlined a card from Matchroom Boxing. Kelly was heavily hyped after representing England in the 2016 Olympics, but his career is now at a crossroads.

In Connecticut, Adrien Broner made his ring return after a two-year layoff, winning a controversial unanimous decision over unheralded Jovanie Santiago. According to CompuBox, the Puerto Rican landed more than double the amount of total punches that Broner did (207-98), with slightly higher accuracy. On the undercard, Otto Wallin (heavyweight), Robert Easter (140lbs) and Rau’shee Warren (118lbs) all scored points wins.

In Las Vegas, former featherweight titleholder Oscar Valdez scored an upset victory over Miguel Berchelt, claiming his WBC junior lightweight title in the process. Berchelt had defended his title six straight times and was the heavy favorite coming in. However, Valdez, who now trains with Eddy Reynoso along with Canelo Alvarez and other top fighters, simply would not be denied. The former two-time Olympian dropped Berchelt twice before putting him down for good in the tenth round. The one-punch knockout was an early leader for 2021 Knockout of the Year. On the undercard, Gabriel Flores Jr (130lbs), Esquiva Falcao (160lbs), Elvis Rodriguez (147lbs) and Xander Zayas (147lbs) all got W’s to remain undefeated.

John Signorella from Las Vegas if Miguel Berchelt will ever be the same after suffering such a brutal loss to Oscar Valdez. “Berchelt had to go through his second wind, the third wind and the fourth wind,” he said. “When you see a fighter have to recover multiple times through the course of a fight, that’s when you have a damaged guy. Now you’re in high-risk territory. That knockout brought me back to other fights like Marquez-Pacquiao IV and Martinez-Williams.”

JT from Tampa called into the show last week and picked David Avanesyan to stop Josh Kelly. He called in again this week to give his thoughts. “The perfect phrase to describe Avanesyan is that he’s battle tested. Kelly’s opponents just had not been world class (prior to Avanesyan) and that’s how I concluded that David would win. Kelly is going to have to go back to that European level now and build himself back up. He does have nice movement and he’s flashy, but I think he lacks the power. You have to have some kind of pop to make your opponent respect you.”