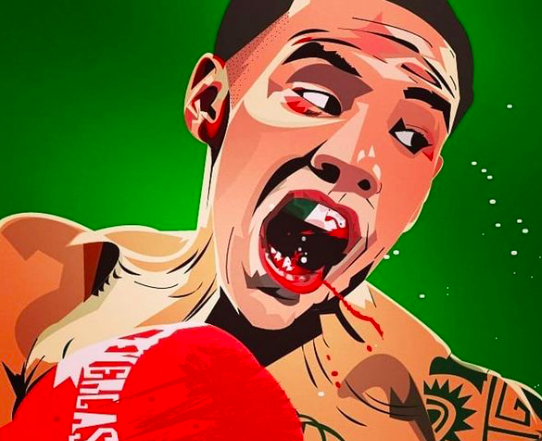 Oscar Valdez does not need any added motivation and desire going into his world title fight against Miguel Berchelt. As far as he is concerned, being the underdog is motivation enough. Valdez not only believes he has the skills and the intangibles to become a world titleholder in another weight class, but that he is the best fighter at 130 pounds.

The unbeaten Valdez will attempt to prove both Saturday night when he squares off against Berchelt at the MGM Grand Conference Center in Las Vegas, Nevada. The 12-round bout, for Berchelt’s WBC world junior lightweight title belt, will follow the 10-round lightweight bout between unbeaten Gabriel Flores and Jayson Velez. 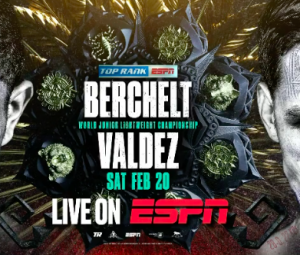 The clash between Berchelt and Valdez is one of this year’s most anticipated fights. Because of their aggression and high-punch volume, Berchelt-Valdez is considered a possible ‘Fight of the Year’ candidate.

Valdez (28-0, 22 knockouts), who was born and raised in Nogales, Mexico, will be attempting to win a world title belt in a different division against Berchelt, who is ranked No. 1 by The Ring. The 30-year-old won the vacant WBO featherweight title in July 2016, defending it six times before relinquishing it three years later.

The hype surrounding Saturday’s clash has brought comparisons to past fights between Mexican fighters, including Carlos Zarate-Alfonso Zamora, which took place in 1977, the trilogy between Marco Antonio Barrera and Erik Morales, and the four fights between Israel Vazquez and Rafael Marquez. Valdez understands how his fight against Berchelt is being compared to Barrera-Morales to sell the hype to fight fans, but believes it is a disservice to their legacy.

“I was glued to the TV every time they fought and, to this day, (when) I see the fight, I have the same energy and feeling as when I was a kid. So it means a lot to me that people compare this (fight) to those fighters. It doesn’t bring pressure at all. It brings motivation. I’m very motivated. It would be an honor for me to showcase a fight like these great fighters did.”

Valdez (below) will enter the ring Saturday for the first time as a betting underdog. 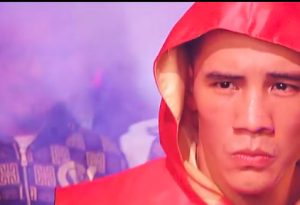 Berchelt (37-1 1 NC, 33 KOs), who resides in Merida, Mexico, has fought the better opposition on paper and is considered at or near the top of the junior lightweight division.

Some boxing experts predict Berchelt’s power and aggression will be too much for Valdez to handle. Valdez has decided to use those and fans predicting a Berchelt victory as fuel to further motivate him.

“(The Berchelt fight) is the first time me being the underdog and I’m loving it,” said Valdez, who is promoted by Top Rank and managed by Frank Espinoza. “It’s nothing but motivation. I’m loving that boxing experts have said that Berchelt is going to walk me down. He’s going to beat me and he’s going to do this and that. I’ve heard my idol, Julio Cesar Chavez, say that he thinks Berchelt is going to win. And that doesn’t bother me. I catch myself noticing that. It just motivates me. There’s nothing better in this world than proving people who doubt you wrong. Showing them that they were wrong is one of the most beautiful things out there. When they tell you can’t do something and then you prove them wrong, I think it’s going to be a beautiful night for me. Hearing all these experts saying these things or being the underdog, it just adds motivation.

“I consider myself to be a very disciplined fighter. I’m very focused. I try not to listen to the negativity. At the end of the day, they’re just words. When Team (Miguel) ‘Alacran’ (Berchelt) makes comments here and there, I don’t listen to them. I’m just very focused on what I want and it’s that WBC (world title) belt. I can’t wait because this is my lifetime opportunity and I’m not letting it go. I’m going to take advantage of it and I’m using everything as motivation. I use social media to post things but I get out of there because social media is sometimes not good for the mind. I’m very focused and staying positive. If people want to consider me the underdog, that just brings me more motivation.”

Valdez may feel more confident in defeating Berchelt because of an improving skill-set, thanks to trainer Eddy Reynoso, who is best known for training Ring Magazine champion Canelo Alvarez. Reynoso has added an elements to Valdez’s game, including incorporating defense, angles, and head movement. 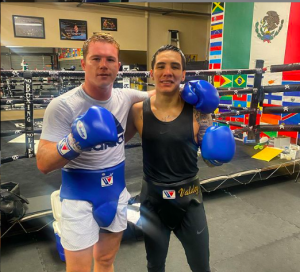 Being part of the Canelo crew might make Valdez just a bit better, enough to get the nod versus Berchelt.

After working with trainer Manny Robles since his pro debut, Valdez’s team decided to switch to Reynoso, which came after the Scott Quigg fight, where Valdez was sidelined for almost a year due to a fractured jaw.

Valdez attributes his improvement due to Reynoso’s staunch stance on repetition in the gym. He admits working with Reynoso was awkward at the beginning, but now sees the importance of subtle aspects of training.

“I would say it’s the small things,” said Valdez, who represented Mexico at the 2008 and 2012 Olympic Games. “Going back to the basics. Sometimes a fighter loses control in the ring. You would think you know how to throw a jab until you start practicing it again. Eddy Reynoso works a lot on repetition. When you go back to the gym, sometimes it gets a little boring. He tells you to throw 100 uppercuts until you get it right. Then the next day, it will be to throw 100 body shots. It gets frustrating sometimes because it gets kind of boring and I’m used to working very hard every day. Then the next couple of weeks, we spar. One thing that I notice is that those 100 uppercuts that I was throwing during sparring, do work. Punches that I wasn’t really throwing back in my other fights. So it goes to show that the work ethic that Eddy has, it does show and it does help. Without thinking about it, I throw punches that we were practicing and it starts working. I’ve said this before: In boxing, you never stop learning. Eddy Reynoso has a lot to show me. He has a lot of experience, not just with Canelo (Alvarez). He goes more back in the day with (Oscar) ‘Chololo’ Larios and other fighters. He has great experiences from every fighter. He has a style from every (previous) fight. For this fighter, we’re fighting like fighter. For this fighter, we have to fight this way. We always have Plan A and have Plan B.

“It’s very interesting always working with Eddy Reynoso. I feel like everyday is something different. Not only do I learn from Eddy Reynoso, but I also learn from my teammates. 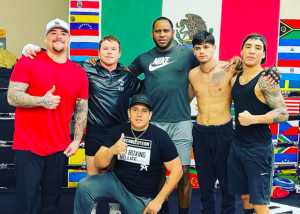 Andy Ruiz, Canelo, Frank Sanchez, Ryan Garcia and Valdez on the top row, with trainer Eddy Reynoso beneath. Team work, will it make the dream work on Saturday night…or will Berchelt be too strong for Valdez?

“Like I’ve said before, you never stop learning in boxing. I watch a lot of tape. I watch Erik Morales, Marco Antonio Barrera, Juan Manuel Marquez, ‘Sugar’ Ray Leonard, Tommy Hearns. I try to watch all the fighters so I can always learn something different. Then, inside the gym, I have a great fighter in Canelo Alvarez. He’s always teaching me several things and what to do in certain situations. Whether I’m in a corner, when my opponent and I are in a clinch, whenever I get hurt, he’s given me advice on what to do. There’s a lot of information out there that every boxer should be repeating. And always learning. Learning from Canelo, learning from Eddy Reynoso, learning from the strength and conditioning coach (on) how to take care my body, how would I could recover faster, what do I need to eat to feel better. I just want to have a healthier lifestyle so I can perform as a better fighter.

“Canelo has been at my sparring sessions. He watches how I fight. One thing he notices is that when I get hit, I get heated and I try and fight back the same way Erik Morales and Marco Antonio Barrera did. I try to brawl it out, which is the style people want to see. Canelo tells me that I have to relax and be smarter. If he hits you, be smart. Be patient and you will hit him back. We do it in sparring and it’s been working out. We go over a lot of things, including what to do in a corner. What would he do if he’s in a tight situation and how would he bob and weave out of certain situations. It’s those little techniques that mean a lot. I’m a fast learner. I study everything. I study styles. I try and imitate great fighters and what they did to become a better fighter.”

A victory over Berchelt could propel Valdez to the top of a talent-rich 130-pound division. There could be a showdown between the winner of WBO titleholder Jamel Herring and Carl Frampton or against WBA titleholder Gervonta Davis.

Even without having stepped inside the ring against Berchelt, Valdez considers himself to be the best junior lightweight in boxing.

“I have to believe I’m the best,” said Valdez. “If there’s a fighter out there who doesn’t believe they’re the best, I think they are in the wrong sport. You have to believe in yourself. I have to believe in myself. It doesn’t matter if I’m fighting Manny Pacquiao. I will always say I’m going to win. I will always say I’m the better fighter because that’s the mindset I have. I seriously doubt that Berchelt is training harder than me. That’s my mindset. It’s not to sound arrogant or cocky. In my mind, that’s what I am. I’m better than my opponent. I worked harder than my opponent. I was born for this and I have to win. Losing is never an option.

Valdez is also known for keeping an array of exotic animals at his home. Valdez posts pictures on social media of his animals, whether it is ‘Pete’ the alligator or his flock of birds. 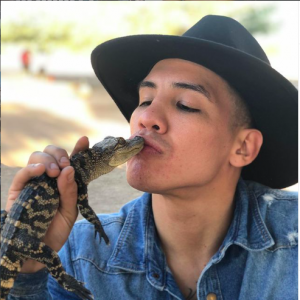 He identifies, whether in or out of the ring, with each animal and considers them more family than pets.

To Valdez, a win over Berchelt will not come as a shock. It is a journey that began as a small boy to win the WBC belt, which is coveted by most fighters from Mexico. The WBC is based in Mexico City.

Valdez has faced adversity, in and out of the ring. A victory Saturday night would be icing on the cake, proving naysayers wrong and fulfilling a life-long dream.

“There’s no pressure at all. I consider myself to be a very disciplined fighter. I’m a very smart fighter. I try not to lose control. I stay focused. That’s what I do. I do not leave my room unless it’s to go to the gym, come back, then run later on in the daytime. I’m like the horse right now. I’m very focused. I can’t wait for Saturday. I’m very anxious. This is my dream fight that I’ve been waiting for a long time. I’m definitely going to take advantage of it.”