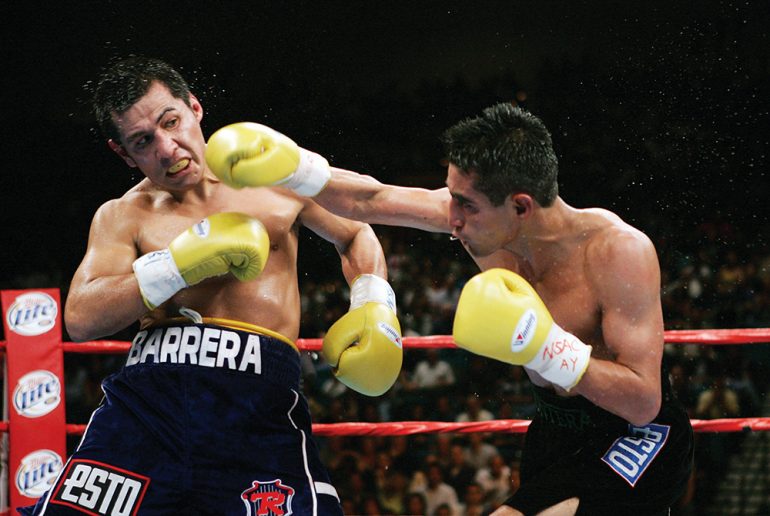 Erik Morales and arch rival Marco Antonio Barrera combined for The Ring's 2000 and 2004 Fights of the Year. Photo by Al Bello/Getty Images
16
Feb
by Anson Wainwright

Throughout the years, there have been many great matchups and rivalries between Mexican fighters.

When local bragging rights are up for grabs both combatants fight with fierce pride.

Mexico has a rich boxing history dating way back to when José Flores Pérez, better known as “Battling Shaw,” became his country’s first world champion when he won the junior welterweight world title in 1933.

Since then, Mexico has thrived and boxing has become deeply engrained in the proud country’s tradition, producing a plethora of outstanding world champions along the way.

We looked through some of those rivalries and have come up with 10 noteworthy fights. In some instances, they were part of a series of fights and we highlighted the best fight of those contests.

Castillo had lost a highly contentious 15-round split decision to Rose in his previous world title attempt in 1968.

Their first fight took place in the spring of 1970. The defending champion recovered from an early knockdown to win a keenly contested 15-round unanimous decision over his compadre at the Forum, Inglewood, California. 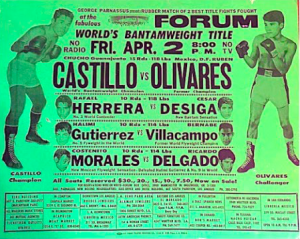 The two factions met six months later in a much-anticipated rematch. Olivares charged out to an early lead but was pegged back by his crosstown rival. The fight was finely poised in the championship rounds before Olivares was relieved of his WBA/WBC bantamweight titles due to a cut he had suffered in the opening round that had progressively worsened until he was stopped in the penultimate round.

They met in a rubber match to complete the trilogy six-months later, again at the Forum. This time Olivares recovered from a trip to the canvas in the sixth round to soundly out-box Castillo, regaining his old titles over 15 rounds by unanimous decision.

Both men were known for their incredible, ferocious power. Zarate sported a 45-0, 44 knockout record while Zamora was an equally impressive 29-0, 29 KOs. Fireworks were guaranteed.

A myriad of reasons including them being friends and differences between their management teams led them to fighting a 10-round non-title bout instead of a unification.

An all-action encounter was expected and the two fighters didn’t disappoint the near 14,000 fervent fans at the Forum, in Inglewood, California. “The Battle of the Z-Boys” was evenly contested until Zarate struck and dropped Zamora late in the third round. “Canas” didn’t let his amigo off the hook dropped him twice more in the fourth to secure the victory, a career best win.

June 3, 1978 – Lupe Pintor SD 15 Carlos Zarate: Zarate had one of the most distinguished bantamweight reigns in history. However, he stepped up to 122-pounds and was blown away by the hugely impressive Puerto Rican superstar Wilfredo Gomez (TKO 5). He had since dropped back to 118-pounds and recorded one more title defense.

Pintor, the younger man by five years, was the underdog and fighting for his first world title.

Zarate got off to a good start dropping his stablemate in the fourth round and damaging his rivals’ nose and left eye. Zarate appeared to get the better of things. However, two of the three judges preferred Pintor’s aggression and rewarded him with a razor-thin split decision.

October 29, 1988 – Julio Cesar Chavez TD 11 Jose Luis Ramirez: El Grande Campeon’s star was still rising. He had won the vacant WBC 130-pound title against Mario Martinez in 1984. He has made nine defenses before stepping up to lightweight, where he sensationally stopped Edwin Rosario for the WBA crown and entered this unification fight with his long-time cross-town friend Ramirez having made one defense.

Ramirez, a veteran of over 100 fights, was in his second stint as the WBC titlist and was coming off a highly controversial win over Pernell Whitaker. (Click here to learn more about Ramirez, from Anson Wainwright.) 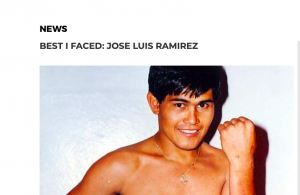 Chavez seemed to be in control, winning many of the rounds but was unable to drop his iron-jawed hombre, although he hurt him on more than one occasion. The two butted heads in the 11th round, Ramirez scalp spewed crimson from a deep laceration and the fight was curtailed at the advice of ringside physician Flip Homansky. The uninjured Chavez was penalized a point but was well ahead on the scorecards and awarded the technical decision to add the WBA title and vacant Ring championship to his ever-growing collection of trinkets.

September 6, 1997 – Erik Morales KO 11 Daniel Zaragoza: Zaragoza was the elder statesman of the junior featherweight division. He was in his third tenure as WBC 122-pound titlist and enjoying something of an Indian summer to his hall of fame career.

Morales, 21, was at the opposite end of his career spectrum; he was unbeaten in 26 outings but this was a clear step up in class.

Zaragoza, the older man by 18 years, used all his skills and veteran savvy, in a closely contested encounter. However, Morales stuck with the defending champion and broke through with a knockdown in the 10th round. Morales went on to stop Zaragoza in the next round to win the first of many world titles in what also turned out to be a hall of fame career.

Gonzalez had reigned supreme at lightweight, holding the WBC title before stepping up to 140 pounds. Gonzalez had also lost to De La Hoya. 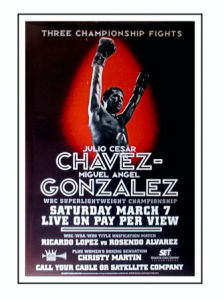 After the “Golden Boy” had vacated the title to move to welterweight, the iconic Chavez and Gonzalez were matched to fill the vacancy. The two met in Gonzalez’ home city, Mexico City. However, it says something about how popular Chavez was that the living legend was the crowd favorite. Gonzalez was busier, Chavez more precise, both had moments and ultimately couldn’t be separated on the scorecards. There was no rematch, Chavez ultimately fought De La Hoya in a rematch, while Gonzalez was stopped in 10 rounds when he faced Kostya Tszyu for the vacant title.

February 19, 2000 – Erik Morales SD 12 Marco Antonio Barrera: Barrera was the first to hit the big time, winning the WBO 122 pound title and making eight defenses before twice stunningly coming unstuck against his nemesis Junior Jones. Although he worked his way back and regained his old title, the sheen had been removed.

Morales got his break against Zaragoza and had since made eight defenses.

The most bitter boxing rivalry of this century. Both men were from starkly different backgrounds, Morales grew up in poverty in the notoriously tough border town of Tijuana. Barrera came from a middle-class family in Mexico City and had studied law.

Both men were extremely well matched and engaged in a high-level war of attrition, neither man took a backward step in a modern-day classic. Both showed granite chins and iron will, in an epic fight that Morales won by split decision.

They initially went their separate ways until their paths crossed again and they met in a much-anticipated rematch nearly two-and-a-half-years later. At the press conference to announce the second go around, Barrera punched Morales in the face making an already white-hot situation incendiary. The fight more than lived up to the pre-fight hype. This time Barrera edged matters in a more tactical affair by a razor-thin 12 round unanimous decision. This was RING fight of the year.

With bragging rights up for grabs they collided in the rubber match in November 2004. Barrera started well before Morales fought back, and as is the case with many of the 36 rounds they shared, it was difficult to separate them. On this occasion, in a fight for the ages, Barrera eked out a 12-round majority decision, in the RING fight of the year. 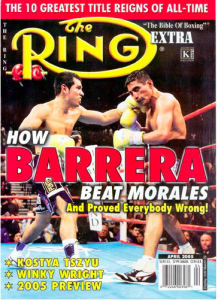 March 17, 2007 – Juan Manuel Marquez UD 12 Marco Antonio Barrera: Earlier in the decade Barrera and Morales made their names together. Quietly in the background, Juan Manuel Marquez went about his business. He’d scored some solid enough wins over the likes of countrymen Manuel Medina (TKO 7) and Orlando Salido (UD 12) in featherweight title outings. However, he was yet to score a career defining win.

Both men had moments in the early going and the fight was developing nicely. Marquez appeared to hurt Barrera, who in turn dropped his rival. However, the knockdown was missed. The wide scorecards didn’t reflect what was an evenly contested encounter through 12-rounds and Marquez claimed Barrera’s WBC 130-pound title.

August 4, 2007 – Israel Vazquez TKO 6 Rafael Marquez II: Vazquez had made his bones twice holding versions of the 122-pound world titles and was widely perceived as the No. 1 in the division, having turned back rival Oscar Larios and recovering to stop big-punching Jhonny Gonzalez.

Marquez had long been cast in elder brother Juan Manuel’s considerable shadow. However, he finally burst through when he beat Mark Johnson twice (SD 10 and KO 8) and then upset Tim Austin (TKO 8) to claim the IBF bantamweight title. After seven successful defenses with nothing left to prove at 118-pounds, he stepped up to face Vazquez.

In the first meeting Marquez recovered from a third-round knockdown to break Vazquez’ nose en route to a savage seventh-round stoppage in an action-packed encounter.

The two met in a rematch five months later and almost unthinkably raised the bar in a thrilling war that saw both dig deep inside themselves. Marquez was dropped by a hook in the sixth round, and although he made his way to his feet, the fight was called off.

In the third meeting, it was Vazquez’ turn to hit the canvas but he recovered and hurt Marquez several times on his way to a close 12-round split decision victory. The second and third clashes won RING fight of the year.

Both men somehow met in a fourth installment in May 2010. This writer remembers going to Fortune Gym in Los Angeles for a media workout and seeing Vazquez spar with a young Mikey Garcia. It was a light contact session and Vazquez wore a face mask to protect his eyebrows from busting open.

The two protagonists were worn down to the nub and had beaten the best of their careers from each other. Marquez had more left and cut up and dissected the shell of Vazquez, bludgeoning him into a third-round defeat to leave the series forever tied at two apiece.

October 23, 2020 – Juan Francisco Estrada TKO 11 Carlos Cuadras II: Estrada came from nowhere to give WBA 108-pound titleholder Roman Gonzalez (UD 12) a tough fight in 2012. In his very next outing, he upset Brian Viloria (SD 12) for the WBA/WBO 112-pound belts. He made five defenses before moving up to 115-pounds.

Cuadras won the WBC 115-pound title against Srisaket Sor Rungvisai in 2014. He went on to make six defenses before losing to Gonzalez (UD 12).

Estrada and Cuadras met on the first SuperFly show in March 2017. The two went at each other hammer and tongs for 12 rounds. The pivotal moment came in the 10th round when Estrada scored a knockdown, it proved enough for him to edge a one-point fight on all three scorecards.

Over the next couple of years Cuadras lost to McWilliams Arroyo before winning three fights. Estrada initially lost to Sor Rungvisai before rebounding to claim The Ring and WBC 115-pound straps in a rematch.

With things difficult because of COVID-19 restrictions the two met a second time. Cuadras knew it might be a last hurrah at world level and whipped himself into excellent shape. Estrada knew he’d have to see off Cuadras to get a second fight with old rival Roman Gonzalez. Cuadras started fast and dropped the defending champion in the third round. Slowly but surely Estrada steadied the ship and found another gear and clawed himself back into the fight. By the later stages Cuadras was showing signs of wear and tear and was stopped in the final minute of the 11th round.