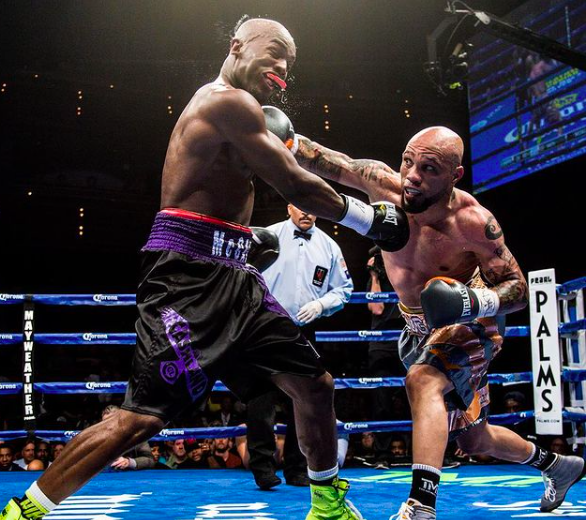 Ishé Oluwa Kamau Ali Smith has spent more than half of his life in a boxing ring. His journey in the sport has led to several notable moments with plenty of ups and downs.

Before turning professional in 2000, “Sugar Shay” compiled an amateur record of 100-17. The highlight of his amateur career was making it to the 1996 US Olympic trials, where he would lose to Zab Judah.

Smith won his first 14 pro fights, culminating in a win over Randall Bailey at welterweight in early 2004. Later that year, he joined the season one cast of the boxing reality TV series “The Contender” as a middleweight. After winning in the opening round of the tournament, he lost to eventual season one winner Sergio Mora. 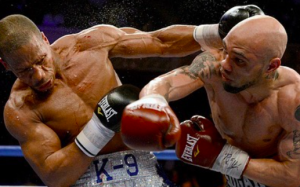 Ishe’s right hand was dialed in on Bundrage on this night. Ishe found K-9 to be pitbull-powerful.

The road got bumpy for Smith after his time on The Contender, both inside and outside the ring. He lost four of his next seven fights between 2007 and 2010. He had hit a low point in his life and briefly considered suicide. However, when reflecting upon his own childhood, growing up without ever knowing his father, Ishé found strength in his children and fought on for them.

In 2013, Smith secured a world title shot with Cornelius “K9” Bundrage. Fighting on the road in Bundrage’s hometown of Detroit, Smith won via majority decision to claim the IBF junior middleweight title. He had made pugilistic history, become the first boxer from Las Vegas to win a world championship.

Yet the good times would not last long, as Smith lost a split decision to Carlos Molina in his first title defense later that year. In 2017, his ex-wife and mother to his first three children was tragically murdered in Las Vegas. By then, Smith had long been dating his current fiancé, adopting two of her children from a previous marriage. The couple would eventually have one child of their own, making a total of six kids in the Smith household today.

Through all the turmoil and change in his life, the good and the bad, Ishé fought on. He won some and lost some, he let it all hang out, never shying away from a challenge. After a RTD3 loss to Erickson Lubin in early 2019, he won a bare knuckle boxing match that September and then retired for good. By the time Sugar Shay wrapped up his twenty year pro career, he had amassed a record of 29-11 (12 knockouts).

Smith recently took a few minutes to speak with RING, reflecting on the best fighters he faced over his successful boxing career, including sparring sessions with some of the greats.

Definitely Shane Mosley, by far. We never fought, but we sparred a lot. I helped him get ready for his rematch with Oscar De La Hoya. I was his chief sparring partner in Big Bear, California for that camp. When you were sparring Shane you had to be ready and sharp every single day because if you got caught slipping, he could definitely make you pay. I fought some guys with good hand speed, but never on that level. Everybody knows that Shane Mosley had lightning fast hands.

Erislandy Lara had the best feet in terms of ring generalship just because he was so hard to hit and catch up to. But I wouldn’t say they were the fastest, he just moved very well.

In terms of the fastest feet, it was sparring Floyd Mayweather. He had the fastest feet I ever had to deal with. I had sparred with Floyd since I was 10 or 11 years-old. Later on I helped him get ready for Mosley, Miguel Cotto and others. Floyd is the master technician. He’s two steps ahead of you, that’s why his opponent’s punch output always goes down when they fight him.

See below, Smith vs Mora. Ishe fought a laundry list of talent.

By far Lara, without a question. A lot of his opponents will say things like, “all he did was run the whole fight”, but when I fought him, he was just better at employing his game plan. He boxed, he hit without getting hit. I came out in the first round and tried to execute our game plan of smothering him, trying to make him fight. He just adjusted so well to what I did. I never had a Plan B. That was the first time in my career that I really felt defeated. I couldn’t figure the guy out.

Definitely Cornelius Bundrage. He was physically stronger than me. I could feel that in the clinches. I never thought he was a better boxer than me, but he was bigger and had the girth to move me around a little bit. He was more physical than me.

In an actual fight I’d give it to Randall Bailey, but the best jab I ever dealt with overall was The Viper, Vernon Forrest. I sparred with him, got him ready for his rematch with Sergio Mora. That’s one thing I’ll never forget. He wore 18 ounce gloves when we sparred and his jab was so stiff and so hard. It was difficult get to get in on him and do anything.

We had a couple of good talks during that camp in Atlanta. I remember him telling me that his jab was the one tool that he was able to control and beat Shane Mosley with. (Forrest defeated Mosley twice in 2002). He was very adamant about always working behind his jab.

I would have to say Lara because I wasn’t able to touch him for 12 rounds. He was very hard to hit, very hard to confuse. I know that some guys have had success with him, but I think that was more on him wanting to stand and bang in those particular fights. His game plan when he fought me was to box and that made it very difficult for me to hit him.

One thing people don’t realize is that Lara has very long arms. His reach is almost like a light heavyweight. I remember thinking to myself during our fight, “damn man this guy has some really long arms.” It was really hard to get inside his reach where I could cause him some problems. He uses his reach as part of his defense.

I thought Julian Williams had a solid chin, Cornelius Bundrage too. I hit those guys with some good punches. I hit K-9 with some pretty big shots and I was surprised he was able to take them. I gave J-Rock everything I had in our fight and he was able to withstand a lot. I was really surprised when he was stopped (by Jeison Rosario) in his first title defense.

It’s so hard to say who the best puncher was. I always had a granite chin, but later in my career I started getting caught a little more and getting hurt. You would think I would say Vanes Martirosyan because he knocked me down for the first time in my career. He had the best pinpoint shots.

But if I had to pick one guy as the biggest puncher, I’d say it was Bailey. He had the knockouts to back that claim (39 of Bailey’s 46 wins were stoppages). Although he never caught me in the face, in the late rounds of our fight he caught me with a good body shot. I felt that one, I was like, “whoa!”

Lara would be the easy choice, but Martirosyan was very technical. He was better than I thought he would be. He was able to set up and catch me with shots that I didn’t see. (Martirosyan dropped Smith twice in their 2015 bout).

It was the last fight of my career, but the best overall fighter I faced in regards to their future potential was Erickson Lubin. And not just because he was the first and only fighter to ever stop me. I remember after that fight feeling that Lubin would have given a young Ishé Smith problems.

He was a really sound technical fighter, he was fast and he was strong. He has all the tools to be a champion. I told him after we fought that I believe when he fought Jermell Charlo (who beat him via KO1 in 2017), he doubted himself going into the fight. He questioned himself being there and you could kind of see it.

But now that he’s hooked up with Kevin Cunningham, I think the sky is the limit. He has the best potential; his ceiling is really high. As long as he stays focused, he can go really far.