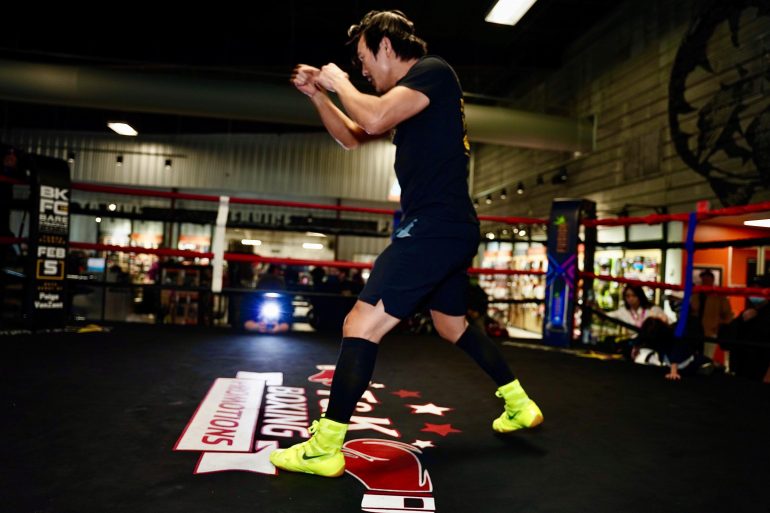 Four years have passed since Dat Nguyen was last in a boxing ring. His last moment there, a sixth round stoppage of the unbeaten Miguel Flores, was supposed to be the breakout moment he’d been working towards for more than a decade.

Beating a highly regarded prospect in dominant fashion should have put him on track for a world title shot, or at least that’s what Nguyen thought. Instead he waited by the phone, disinterested with the offers for tuneup fights that were being made to him. Two years later, it was Flores who received a world title opportunity, going 12 rounds in defeat against WBA junior lightweight titleholder Leo Santa Cruz.

Nguyen looked at the sacrifices he’d made to boxing over 20 years, putting in countless miles on the road and rounds in the gym. He considered the small purses he’d made in boxing, and how that time could have been used investing in businesses instead. That’s when Nguyen and his wife, Mylinh, opened up Miss Saigon, a Vietnamese restaurant in their town of Vero Beach, Fla. As far as Nguyen was considered, he’d thrown his last punch in a prizefighting ring.

“I was very disappointed so I kind of gave up boxing. I was like, maybe boxing is full of shit,” said Nguyen, whose boxing record stands at 20-3 (7 knockouts).

Nguyen was content with his life as a restauranteur, and training boxing aspirants at his gym, Miracle Boxing Academy.

But when news broke of Florida following Wyoming’s lead to legalize bareknuckle fighting, Nguyen got the itch to throw hands once again. He reached out to David Feldman, president of Bare Knuckle Fighting Championship, and asked to appear on one of his cards.

After winning his first two fights, Nguyen will finally get his championship opportunity, albeit in a different sport from the one he’s most known for, when he faces BKFC bantamweight (135 pounds) champion – and UFC veteran – Johnny Bedford this Friday at the RP Funding Center in Lakeland, a suburb of Tampa, Fla. The show, which also features the promotional debut of former UFC star Paige VanZant, will be shown on FiteTV.com for a pay-per-view price of $39.99.

Nguyen has made an impact in his first two appearances for the company, beginning in October of 2019, when he outpointed Travis Thompson over five rounds. In his second appearance four months later, Nguyen got off the floor to score a brutal first round knockout of Abdiel Velazquez with a punch that left a blood splatter across the camera.

Wearing a rice hat in an homage to his Vietnamese heritage, appearing like the Mortal Kombat character Raiden, and entering to the Mortal Kombat theme song, Nguyen appears to be a character entirely native to bare knuckle, as opposed to a transplant from boxing or MMA, as most of the combatants are. His aggressive style, and deep combat sports background, have made him one of the standouts of the sport in its infant stage of legality.

“He’s the only real boxer [in BKFC] other than Reggie Barnett that has that amateur and professional experience,” said Nelson Lopez Jr., an agent with BKFC tasked with bringing in international talent. “He is making an impact with what he does have to offer.”

Bare knuckle fighting is exactly what it sounds like. It’s similar to traditional gloved boxing in that punches are the lone form of legal scoring. Hands can be covered with a wrap and tape, but not the knuckles themselves. Fights consist of five, two minute rounds, and take place in a round, circular ring. The absence of gloves means it is harder to block, and being overly defensive is a recipe for disaster, Nguyen says.

Nguyen figures that’s what happened to Paulie Malignaggi, the former 140 and 147-pound boxing champion who lost a decision to MMA veteran Artem Lobov in a one-off appearance on a BKFC event in June of 2019.

“Floyd [Mayweather] would not succeed in bareknuckle, he would lose all day because he’s very defensive and he goes in that shell, that stuff doesn’t work in bareknuckle,” said Nguyen. “This sport’s been there forever but once you have gloves on a lot of fighters adapted and got better because they see what they can do. If you look at fights in the early 1900s, you don’t see nobody doing the Mayweather roll.”

Nguyen still trains the same way he would for a gloved boxing fight, for timing and condition, but with the knowledge that the punches will be coming faster and from different angles once the gloves are off.

That’s not to say that Nguyen is done with boxing for good. He sees the possibility of a crossover fight in boxing, or even in mixed martial arts, given that he comes from a Kenpo Karate background and wrestled for four years in high school growing up in Hawaii.

“When you’re champion versus champion it’s a lot easier than if you’re a nobody versus a champion in different sports,” said Nguyen. “When [Conor] McGregor went to Mayweather it generated a lot of interest. Hopefully if I become a champion in bare knuckle with a huge following I can always go to the UFC if I want to be a champion, or fight one of the boxing champions because I have the background to do both of those.”

As bare knuckle fighting grows in popularity and acceptance, it will need a face to hitch its wagon to. Nguyen hopes to be that face.

“If I become a champion there it’s gonna blow the sport up,” said Nguyen. “They need a face, somebody that is skillful, that knows the art.”