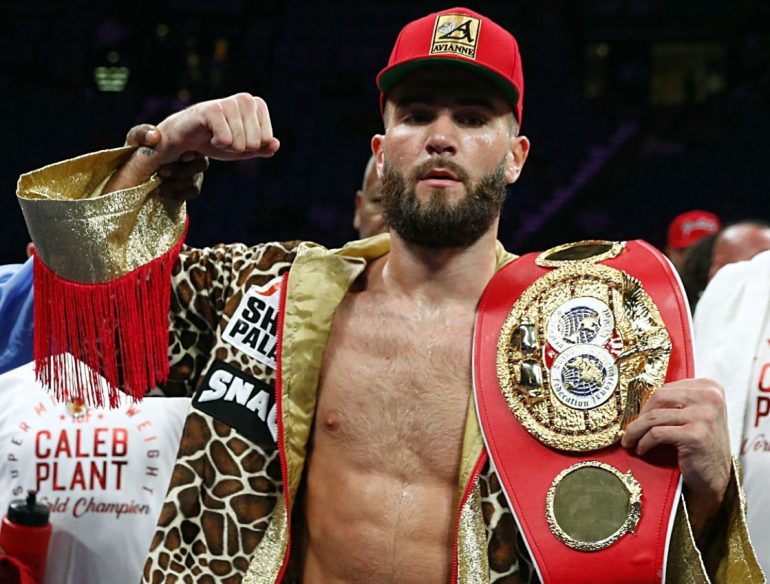 Caleb Plant turned in an utterly dominant performance against Caleb Truax, doing everything that could be done except scoring a knockout on Saturday night.

In the end, Plant recorded a shutout decision over Truax, a former world titleholder and the mandatory challenger, to retain his IBF super middleweight belt for the third time in the main event of the Premier Boxing Champions on Fox card at the spectator-free Shrine Auditorium and Expo Hall in Los Angeles.

All three judges scored the bout 120-108 – as did The Ring – for Plant, who won every round with ease despite suffering a left hand injury early in the bout to keep himself in position for a highly significant 168-pound title unification fight in the fall with unified and Ring champion Canelo Alvarez.

Plant (21-0, 12 KOs), 28, of Las Vegas, elected to make his second mandatory defense in a row because he and his team reasoned that it made sense to get the obligation to Truax out of the way in order to be available for a major fight later in the year without any pressure from the IBF to fight a specific opponent.

With Alvarez (54-1-2, 36 KOs), the pound-for-pound king and boxing’s biggest star, having said that he wants to unify the four major belts at 168 pounds, that means Plant is one of his targets and he will now be available for the undisputed world title fight later in the year as long as Alvarez wins the two bouts he already has planned. Alvarez has a mandatory defense against Avni Yildirim scheduled for Feb. 27 in Miami followed by a three-belt unification bout with Billy Joe Saunders that has been agreed to for May, although is not yet signed.

Plant, who was asked about the prospect of facing Alvarez for the undisputed title repeatedly in the lead up to Saturday’s fight, reiterated again that it is the showdown he wants.

“That’s my goal,” Plant said. “I want to become the first undisputed super middleweight champion of all time and so whoever is in the way of that, it doesn’t matter. You line ‘em up, I’ll knock ‘em down right here on Fox.

“I feel like I’m the best super middleweight in the world. Whoever is in the way of me becoming the first undisputed (168-pound) champion, you line ‘em up, I’ll knock ‘em down.”

He did not knock down Truax but he did as he otherwise pleased. His speed advantage was evident in the opening moments of the fight and it was a problem for Truax all night.

Plant’s jab was stiff and he snapped it out and knocked Truax’s head back regularly. He also went to the body, although sporadically, and landed many hooks.

By the fourth round, Truax’s face was reddened from taking so many clean punches and by the end of the round there was blood on his face from a bloody nose as Plant tripled up on his jab and landed clean combinations that Truax simply had no answer for.

As the rounds went on Plant continued to box and move against an entirely ineffective Truax, who plowed forward but rarely connected. Plant, meanwhile, landed shots cleanly and used his superior footwork and speed to move out of the way before Truax could land anything in return.

Some of Plant’s blows would land and send the blood flying from Truax’s face. However, Plant said somewhere around the fourth or fifth round he injured his left hand and believed it was broken.

IBF 168-lb champ @SweetHandsPlant may have injured his hand early on, but that didn’t slow him down. #AndStill #PlantTruax pic.twitter.com/MmoBMaP9hH

Truax (31-5-2, 19 KOs), 37, of St. Michael, Minnesota, landed a couple of decent right hands in the eighth round and in the ninth round but Plant took the shots and continued to maintain the pace of the fight exactly how he wanted it to go.

Truax was game to the end and had conserved enough energy for the final few rounds to keep moving forward, but even when he landed a hard shot it was only one at a time, and not nearly enough to change the momentum of the bout.

In the corner before the start of the 12th round, Tom Halstead, Truax’s trainer, was very clear with the most obvious instruction there was, telling his man he had to go for broke and get a knockout. Truax tried but Plant backed him up with shots down the middle and there was no miracle punch from the challenger.

The CompuBox statistics overwhelmingly favored Plant, who landed 179 of 581 punches (31 percent) while Truax connected with just 47 of 389 blows (12 percent).

Plant outlanded him in every round and Truax never landed more than eight punches in any round, doing so in the 11th round. Defensively, Plant continued to impress as his opponents have landed just 6.6 punches per round, the fewest among active super middleweights.

Truax was attempting to notch another major upset in a world title bid. In December 2017, he traveled to James DeGale’s turf in England as a hand-picked challenger expected to be fodder for a DeGale homecoming defense. Instead, Truax won a decision to claim the IBF belt in the upset of the year. Despite losing the title to DeGale in an immediate rematch four months later, he felt he could spring another upset over Plant, whose opposition has been light.

But Plant never let him in the fight. He came into the bout with a chip on his shoulder, saying he was still ticked off at Truax for a tweet he posted about him in January 2016.

Plant was in his 12th pro fight in a televised PBC preliminary bout against Adasat Rodriguez, which Plant won by sixth-round knockout. But early in the fight Truax, who was tuned in, tweeted, “(One) round in and I already hope Caleb Plant gets knocked out” because he believed that Plant was showing up his overmatched foe.

Plant said he has had Truax in mind as a potential opponent since that night and said in the buildup to Saturday’s fight that the tweet was a “motivating factor” for him during training camp and he predicted he would get a sensational knockout.

“I wanted the stoppage,” Plant said. “I’m a little disappointed my hand got hurt early on in the fight, but I feel like I put on a great performance and I’m ready for whoever and whatever is next.”