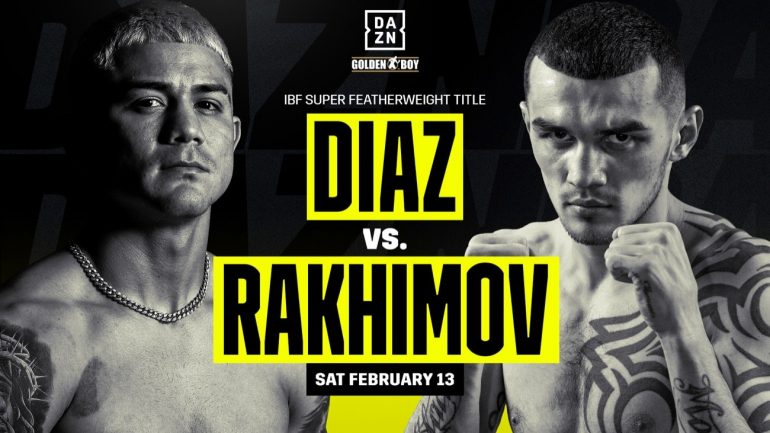 The stacked event will take place Saturday, Feb. 13 and will be streamed live exclusively on DAZN in more than 200 countries and territories, including the U.S., Mexico, Russia, Tajikistan, Brazil and Argentina.

“Golden Boy’s first journey to Fantasy Springs in 2021 picks up right where we left off—with an action-packed card from top to bottom,” said Oscar De La Hoya, Chairman and CEO of Golden Boy. “A true crossroads fight will see Jason Quigley and Shane Mosley Jr. leaving it all in the ring to regain contender status in the middleweight division. And after upsetting my cousin Diego De La Hoya, Ronny Rios will look to keep it rolling against an always-tough customer in Oscar Negrete, whose only two losses have come to a world champion.”

Rios is a 30-year-old contender of Santa Ana, California who is coming off three consecutive stoppage wins, including a dominant knockout victory of then-undefeated Diego De La Hoya in 2019. Rios plans to capitalize on this opportunity in convincing fashion in order to accelerate his path to another world title shot.

“COVID-19 robbed all of us of something, whether it was memories, family members, friends, or in my case, a year of my boxing career,” said Ronny Rios. “I have lost opportunities to make up for, and I’m hungrier than I’ve ever been. That’s not good news for Oscar Negrete. I have a lot of respect for Oscar, but at the end of the day, I have one job and that’s to break the will of every opponent I face. My time to capitalize on the momentum I’ve built in this sport starts with this fight.”

Negrete, a 33-year-old native of Tierralta, Colombia, will return to 122 pounds after a unanimous decision victory against two-time Olympian Alberto “Impacto” Melian and an unforgettable trilogy against Joshua “The Professor” Franco,who is now a world champion.

“I am delighted to be returning to the ring against Ronny Rios on February 13,” said Oscar Negrete. “Both he and I have a style that is very aggressive, and that’s going to guarantee a real war inside the ring. This fight will be very important in determining the future of this competitive division. That’s why I’ll be training at 100% in order to walk away with the victory and earn another opportunity at a world title.”

Quigley, a 29-year-old native of Donegal, Ireland will return after knockout victories against Abraham Cordero and Fernando Marin. He’ll look to regain his spot in the division after suffering his first and only defeat against Tureano Johnson in 2019.

“I feel more than ready for this fight,” said Jason Quigley. “I worked hard during lockdown and have stayed ready to fight at any time. I have to go in there and take care of business.  I’m very grateful for the opportunity to fight on this card.”

Mosley Jr., a 30-year-old native of Pomona, California, will seek to earn a top stop at the division after signing with Golden Boy in 2020 and defeating Jeremy Ramos in his last outing.

“I want to thank everyone at Golden Boy and The Contender for giving us this opportunity,” said Shane Mosley Jr. “I have been working extremely hard, and I’m ready to show that I belong among the best in the world. Make sure to watch me live on DAZN on February 13 against an excellent fighter in Jason Quigley.”

The card will also feature many rising prospects and contenders.

Explosive Armenian contender Azat “Crazy A” Hovhannisyan (18-3, 15 KOs) will return in a 10-round super bantamweight bout.

Hawaiian prospect Dalis Kaleiopu will make his professional debut in a four-round lightweight fight against Eduardo Sanchez (2-3) of Corcoran, California.

The opponents for Melikuziev and Hovhannisyan will be announced shortly.

Diaz Jr. vs. Rakhimov is a 12-round fight for the IBF Junior Lightweight World Title presented by Golden Boy in association with RCC Boxing Promotions. Teixeira vs. Castaño is the 12-round co-main event for the WBO Junior Middleweight World Championship presented by Golden Boy in association with TGB Promotions. The event is sponsored by Hennessy “Never Stop. Never Settle,” “BetOnline – Your Online Sportsbook Experts,” and O’Reilly Auto Parts. Better Parts, Better Prices…everyday! The fight will take place Saturday, Feb. 13 at Fantasy Springs Resort Casino and will be streamed live exclusively on DAZN in more than 200 countries and territories, including the U.S., Mexico, Russia, Tajikistan, Brazil and Argentina.