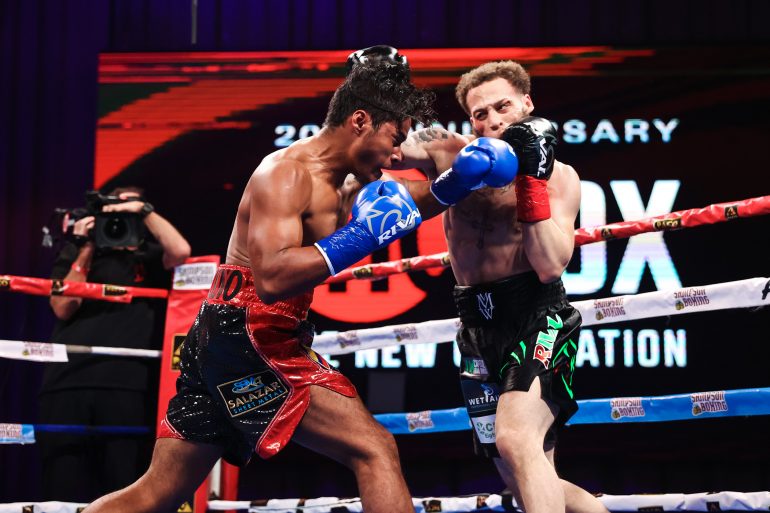 Mykquan Williams improved to 16-0-1 (7 knockouts) by defeating Yeis Solano tonight in Connecticut. The judges scored the 140-pound fight 97-92 and 96-93 twice for Williams.

Williams grew up in Hartford, about 40 miles northwest of the Mohegan Sun Casino, the site of tonight’s ShoBox card on Showtime.

The hometown fighter started very well. He controlled the pace of the bout from mid-range in the early rounds. He slipped and ducked under wide punches from Solano, landing counters and turning his opponent before he could get close.

However, Solano (15-1, 10 KOs) continued to apply pressure and quickly began to make his presence felt. The Colombian worked his way inside and appeared to win some of the middle rounds. It felt like a competitive, if not even fight halfway through.

In the sixth round, Williams appeared to make an adjustment. He showed a high level of skill on the inside, punching around Solano’s guard to the body. The 22-year-old was the natural junior welterweight and it began to show in the clinches. Solano, who was moving up from lightweight, was being worn down.

In the eighth round, Williams landed a right hand to Solano’s right shoulder, dropping the off-balance fighter. It was a flash knockdown, but enough to give Williams a 10-8 round.

In the tenth and final round, referee Danny Schiavone made a couple of bad calls. He took a point from Solano for a low blow, although the punch appeared to be above the belt. Later in the round, the fighters got tangled up and both went down to the canvas. Schiavone incorrectly ruled a knockdown against Williams. To add more confusion, it was announced after the fight that the points docked by Schiavone had been reversed by the commission.

Solano suffered his first loss as a pro tonight. He fought exclusively in Colombia until 2017, then in Mexico twice, and his last two fights have been in America.