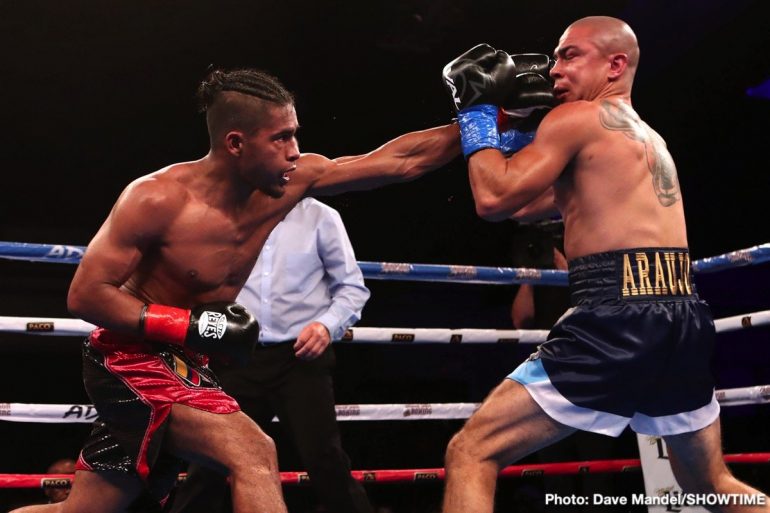 Yeis Solano does not want his last fight to represent who he is as a prospect. Instead, Solano wants to prove that he is on his way to title contention in a very lucrative and competitive lightweight division.

Solano will face Mykquan Williams on Wednesday at the Mohegan Sun Casino in Uncasville, Connecticut. The 10-round bout will headline a three-bout ’ShoBox’ telecast (Showtime, 9 p.m. ET/ 6 p.m. PT).

This is an intriguing clash between unbeaten prospects, with the winner taking a significant step forward.

Solano (15-0, 10 knockouts), who resides in Monteria, Colombia, will be making his second appearance on the ‘ShoBox’ series. In June 2019, he dropped Elias Damian Araujo in Round 4 en route to a split decision victory.

The 28-year-old believes that he can perform much better than he did that night.

“I learned a lot [in the Araujo fight], especially regarding discipline,” Solano told The Ring. “I learned to eat smart and hydrate properly. My legs didn’t function well because I was dehydrated towards the end of the fight. I could’ve won earlier. The important thing was that I didn’t lose control or panic.”

Like countless other fighters, Solano had a bout postponed last year due to the pandemic. However, he has remained in the gym and insists that he’s fully prepared.

Williams (15-0-1, 7 KOs), who resides in East Hartford, Connecticut, last fought in October 2019, fighting his way to a majority-decision draw with Tre’Sean Wiggins. He has youth on his side, but his opponent will have the height and size advantages come fight night.

“He’s an excellent fighter,” said Solano. “He’s 15-0 and I studied him very well. His lead hand is his dangerous punch, but I don’t think he has fought someone that can challenge him from the beginning of a fight.”

Since migrating from Colombia, Solano fought a handful of fights in Tijuana, Mexico before the Araujo victory. He has resided in the Los Angeles suburb of Compton for the last three years, benefitting from sparring at gyms in Southern California, whether against world titleholders or contenders. Recently, Solano has sparred Ryan Garcia in San Diego.

“When you come to the United States, you see the differences clearly between the gyms here and back home,” said Solano. “The gyms in Colombia are poorer while you have everything here in the United States. The sparring and training is different. The quality is better here. For me, I want to spar everyone, try and impress and do better during each training session. I honestly believe I have gotten better.”

“I sparred Ryan Garcia for his preparation for the Luke Campbell fight earlier this month. He does have speed and you could feel the power in his punches. Every fighter has his limitations. He is fast, but I am strong. It would be a great clash if we were to fight.”

Solano anticipates more opportunities should he defeat Williams. Not only does he want to win impressively, he also wants to continue providing for his family.

While a fight against Garcia, Ring Magazine champion Teofimo Lopez or WBC titleholder Devin Haney is a long way away, Solano believes his style can bring in more fans and lead to success in the ring.

“When I was in Colombia, I utilized the ring a lot, but now I have a more Mexican-style that I use,” he said. “I come straight forward. I’m going to do the same thing for the Williams fight. I haven’t seen a fight where he is backing up. I believe I can overcome any weakness I have to get better and win fights. I’m very motivated to fight the top fighters. I want to fight the best. Whoever has the best record or the title, I want those fights: Garcia, Haney, or anyone.

“I want to triumph. I want to do so for a lot of people. I never want to throw in the towel because I want to do everything I can for my mom, my dad, and my kids. I want to win for Colombia as well. I have to win.”