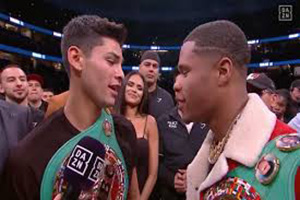 The COVID-19 pandemic may have disrupted the boxing schedule in 2020, but there were still several high-profile fights that took place.

Now that 2021 is here, there are fights that could make boxing fans salivate with anticipation. Of course, that all depends if all parties (fighters, promoters, managers, etc.) can work together to make the fights happen.

Here are 10 fights that could happen this year. Not included is the anticipated showdown between junior welterweight titleholders Josh Taylor and Jose Ramirez. That fight has already been verbally agreed to and could take place this summer at a venue with fans, all depending though on the ongoing pandemic.

1. Errol Spence-Terence Crawford: This fight has to happen this year, right? For the last couple of years, Spence-Crawford (or Crawford-Spence) has been built up more by scribes and fans than either fighter. Each fighter has lately given the thought of a unification fight between the two the cold shoulder, which is too bad considering the pay-per-view sales and the interest amongst casual fans the fight would have.

Does this fight need to have a live audience for this fight to happen? Yes, which would then push this fight to late this year. If this fight does not happen this year, would you blame boxing fans for giving up on it? Let us hope Spence and advisor Al Haymon, and Crawford and his promoter Bob Arum, plus their respective broadcast partners, can work together to make this fight happen. They did before. Twice, actually, with the Tyson Fury-Deontay Wilder fights. Keep your fingers crossed.

2. Andy Ruiz-Chris Arreola: Bombs away! Not only is this a fight between two Mexican-American heavyweights who throw lots of punches and are never in a bad fight, but they both have the gift of gab. Both fight under the Premier Boxing Champions banner so this fight should be easy to make. Winner continues maintaining his status as a contender.

3. Caleb Plant-David Benavidez: Canelo Alvarez has a busy schedule ahead of him with defenses of the WBC super middleweight title. Where does that leave Plant and Benavidez? Plant will be making a defense of the IBF title against Caleb Truax on January 30 and Benavidez will likely return to the ring in March. Both can face off during the summer with the winner emerging as top candidates to face Alvarez later this fall.

4. Gennadiy Golovkin-Jaime Munguia: Golovkin successfully defended the IBF middleweight title by stopping Poland’s Kamil Szeremeta on December 18. There is a possibility Golovkin could unify against WBO titleholder Demetrius Andrade, but that remains to be seen. Golovkin was actually penciled to face Munguia in May 2018 after Alvarez withdrew from the rematch due to testing positive for minor traces of clenbuterol. The Nevada Athletic Commission did not sign on to the fight, and instead Golovkin knocked out late-sub Vanes Martirosyan. Munguia would end up fighting WBO titleholder Sadam Ali, winning by knockout to win the title. Munguia defeated Tureano Johnson in his last bout on October 30. Golden Boy Promotions, which co-promotes Munguia with Zanfer Promotions, would sign on for a Golovkin fight, which would take place this summer.

5. Jermall Charlo-Jarrett Hurd: Charlo successfully defended his WBC middleweight title by defeating Sergiy Derevyanchenko by unanimous decision in his last bout on September 26. A unification bout against Golovkin is compelling, but who knows if that fight will happen. Less than three years ago, Hurd was thought of as the top guy at 154 pounds, defeating Erislandy Lara in a great fight in April 2018. Hurd would lose to Julian Williams over a year later, but rebounded in his last bout on January 25 by defeating Francisco Santana. At age 30, who knows if Hurd can still make 154 pounds, but a move up in weight to face Charlo would be very appealing. Just like Ruiz-Arreola, both Charlo and Hurd are both represented by PBC.

6. Jermell Charlo-Brian Castano: Charlo also fought on the same September 26 card, stopping Jeison Rosario in a unification fight. Besides the Ring Magazine championship, he now holds the WBC, IBF and WBA world titles. The WBO title is on the line on February 13 when Patrick Teixeira will defend against challenger Castano, who is the betting favorite going into the fight. If Castano wins, Charlo will push for a unification match for the undisputed championship at 154 pounds. Both are also represented by PBC. What if Teixeira wins? A push could be made to unify, but that would mean Oscar De La Hoya, who promotes Teixeira, negotiating with Al Haymon, which could be complicated.

7. Devin Haney-Ryan Garcia: WBC president Mauricio Sulaiman said last week that he will order Devin Haney to defend the lightweight title against Ryan Garcia later this year. Sounds good. To build the fight, why not have both fighters co-headline a card? Haney can fulfill a mandatory defense by fighting Javier Fortuna while Garcia can face the likes of Jorge Linares or Anthony Crolla. Garcia was scheduled to fight Linares last July in Los Angeles before the pandemic cancelled that fight. If Haney and Garcia win their respective fights, this fight could headline in Las Vegas, Texas or Los Angeles in front of a large crowd.

8. Naoya Inoue-John Riel Casimero: These two were set to face off in a unification bantamweight fight on April 25 before the pandemic cancelled those plans. Inoue, who has a promotional deal with Top Rank, returned to the ring on October 31, stopping Jason Moloney in defense of his Ring Magazine championship. Casimero stopped unbeaten Duke Micah in his last bout on September 26. Fight fans want to see more of “The Monster,” and a fight against a strong, come-forward type of fighter like Casimero would guarantee action.

9. Kazuto Ioka-Jerwin Ancajas: With the rematch set for March 13 between WBA titleholder Roman ‘Chocolatito’ Gonzalez and Ring Magazine/WBC titleholder Juan Francisco Estrada, why not have the other two world titleholders of the division square off? Ioka successfully defended his WBO title on December 31 by stopping Kosei Tanaka in round 8 of an action fight. Ancajas has to defend his title against mandatory challenger Jonathan Rodriguez of Mexico, but a unification fight against Ioka later this year is not out of the question. Another version of ‘Superfly’ would take place later this year and possibly in 2022.

10a. Elwin Soto-Felix Alvarado: Fighters at 108 pounds do not get a lot of exposure, but these two world titleholders do fight under the Golden Boy Promotions banner. Alvarado defended his IBF title against Deejay Kriel on January 2, winning by knockout. Soto, who is also co-promoted by Zanfer Promotions, defended his WBO title by defeating Carlos Buitrago on October 30. Both are aggressive and throw a lot of punches. This might be a stretch, but if it lives to expectations, this fight could mirror the trilogy between Humberto ‘Chiquita’ Gonzalez and Michael Carbajal of the mid-1990s.

10b. Regis Prograis-Mario Barrios: Why not? This has action written all over it. Prograis and Barrios fought on the undercard of the Gervonta Davis-Leo Santa Cruz fight on October 31. A win by Prograis puts him back in the title hunt against the winner of Ramirez and Taylor. A win over Prograis would legitimatize Barrios’ place in a competitive 140-pound division.