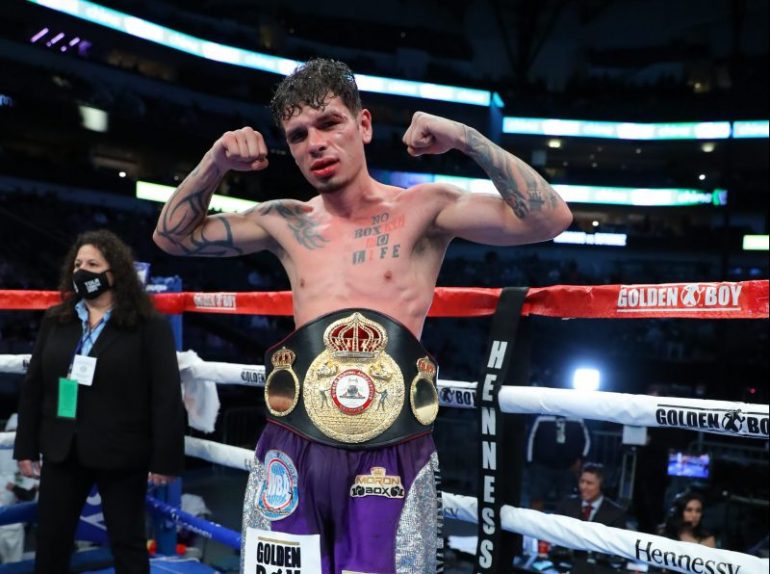 Some things are tough to let go, like death. It’s what Roger Gutierrez lugged in the ring with him Saturday looking to upset WBA junior lightweight titlist Rene Alvarado on the Ryan Garcia-Luke Campbell undercard from the American Airlines Center in Dallas, Texas.

More than a month ago, Gutierrez mother, María Neida Cuevas, died of cancer.

Gutierrez dedicated his fight to her memory—then came through with that promise with three knockdowns, two in the second and a career-changing knockdown off a left hook in the 12th, to win a unanimous decision over Alvarado to take the WBA 130-pound title.

“I am so happy for this victory,” Gutierrez said. “I did this for my mother. There’s not much more I can say. I had to look for the knockout. I knew I had to do that to win. I want to thank my manager Rafael Moron, the WBA and Golden Boy. This is for Venezuela and for my children.”

Gutierrez (25-3-1, 20 knockouts) used a right uppercut and another right to get Alvarado (32-9, 21KOs) in trouble in the second, only to have Alvarado, who had stopped Gutierrez in seven three years ago, mount a comeback.

Without the third knockdown, Gutierrez would not have won by the unanimous 113-112 scores.

Gutierrez suffered a cut on his left eyelid in the fifth, forcing referee Mark Nelson to summon the ringside doctors to take a look. By then, Alvarado was back in the fight. That was until he got caught coming forward by Gutierrez, tapped hard by a left hook that came from a low angle upward that Alvarado did not see.

“I knew this would be a tough fight,” Felix Alvarado said. “He was a mandatory challenger and a former world champion, so I knew it would be tough. I got a bit tired, but that was because of his experience. I also dropped him with a hook, and I didn’t even expect for a punch like that to land. But rather than keep looking for that punch, I kept pushing him to the ropes to wear him down. I’m very happy to obtain this win because it is a dream come true for the Alvarado brothers to fight on such a big card together. I want any of the other world champions so I can show who is the best in the division.”

Kriel was knocked down twice, once in the second with a left hook, and again in the fourth with a left hook. Felix Alvarado, coming off almost a 20-month layoff, constantly strafed Kriel with left hooks and straight rights.

In the 10th, referee Mark Calo-oy started looking closer and saw Kriel take a pounding, then stepped in to end it 1:39.