Women’s Boxing in 2020: The Ring’s panel of experts weighs in 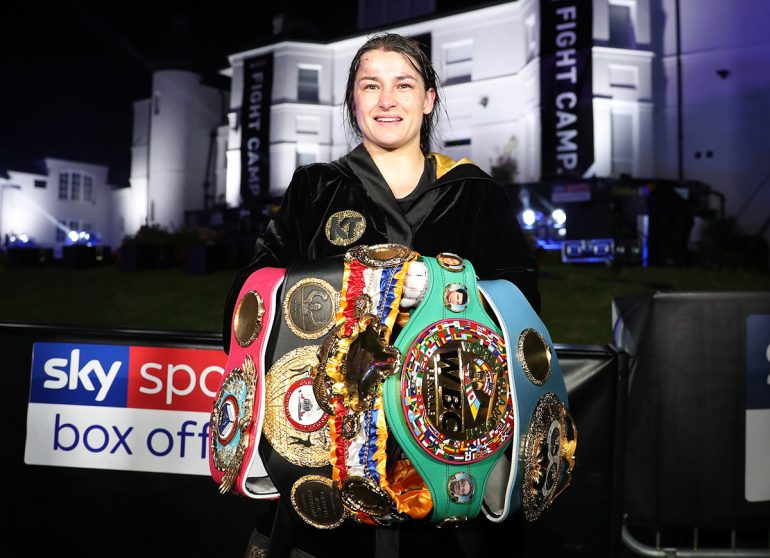 Katie Taylor holds all the marbles in the lightweight division. Photo by Mark Robinson/ Matchroom
31
Dec
by The Ring

As one of the most difficult years in recent history comes to a close for the entire planet and the bleak analyses of the past 12 months pile up for almost every human activity, boxing also tries to come to terms with an unusual period in which disruptions were the norm.

But even in this discouraging context, boxing did manage to stay afloat and even flourish, and in some cases all that was missing was the roar of the crowd in the background, since the action matched or even surpassed (at least in quality, if not in quantity) that of previous years.

This was also the year in which a modest historic moment came to fruition when The Ring created its divisional rankings for women’s boxing, updated weekly by a panel of select writers and insiders from all over the world.

We asked them to create their own list of personal awards reflecting the highs and lows for 2020, and this is what they produced:

Fight of the Year: Terri Harper vs. Natasha Jonas

Round of the Year: Terri Harper-Natasha Jonas – Round 5

Trainer of the Year: Stefy Bull

Event of the Year: Claressa Shields announces move to MMA

Fighter of the Year: Katie Taylor – In an era where most boxers who are able to put their hands on a world title try to avoid dangerous rivals, Katie Taylor showcased her virtue by exposing herself to the best competition she has faced. Once again, she confronted Delfine Persoon, who made Taylor not just go the distance in both of their fights, but nearly beat her in the first one.

Fight of the Year: Katie Taylor vs. Delfine Persoon II – As expected, Taylor demonstrated her respect for the sport and the importance of the saying, “To be the best, one must beat the best,” and Persoon also went in determined to take all the belts that were unified in the first bout. Both gladiators gave a spectacle on how to become legendary.

KO of the Year: Shannon Courtenay KO 7 vs. Dorota Norek – Sudden, decisive; without doubts a good old-fashioned Knockout, where you know exactly when and how it happened.

Upset of the Year:  Cecilia Braekhus vs. Jessica McCaskill – McCaskill is responsible not just for Braekhus’ first loss in her 11-year reign, she also canceled the tiebreaker between the legendary Joe Louis and Cecilia by preventing her 26th consecutive title defense. It was not just unexpected; it was historic.

Prospect of the Year:  Kim Clavel – Even when she was facing the COVID-19 challenge as a nurse, she was able to keep her focus on her boxing career and her goal of becoming a world champion.

Sportsmanship of the Year: Miriam Gutierrez – “Defeat has a dignity that victory doesn’t know of.” – Jorge Luis Borges

Foolishness of the Year: Mariana “Barbie” Juarez –  After losing her WBC belt to Yulihan “Cobrita” Luna, she interrupted her interview to accuse Luna of making modifications to the gloves in the most disrespectful and dishonorable manner.

Fighter of the Year: Katie Taylor – Clearly everyone’s favorite, Katie is without a doubt the best of 2020. She has demonstrated in her two fights that she is a complete athlete, and not just a boxer. Watching her move on the ring is a thing of beauty.

Fight of the Year: Terri Harper vs. Natasha Jonas / Katie Taylor vs. Delfine Persoon II – Those were two of the best fights in 2020, no question about it. Two fights of great technical quality and lots of action. I could pick Taylor-Persoon II as the slight favorite because of how disputed all the rounds were, and because this was the fight in which Taylor really showed she’s the No. 1 in women’s boxing when she defeated a great fighter like Persoon with such clarity and determination.

KO of the Year: Shannon Courtenay vs. Dorota Norek – Courtenay dropped Norek in Round 7 with one single punch. She showed she is ready for bigger challenges when she overcame an awkward fighter like Norek, who was on top of her in the early rounds. The strength of the British fighter ended up being too much, though. A great stoppage win!

Most Pointless Bout of the Year: Seniesa Estrada vs. Miranda Adkins – An unnecessary fight, and a great mismatch. Estrada was coming off a few great fights, and facing an older and unexperienced fighter was not going to add anything to her resume.

Prospect of the Year: Gabriela “Chucky” Alaniz – She is a promising fighter in a star-studded division. The Argentine fighter has speed, strength and intelligence in the ring, and that makes up for a very attractive style.

The “Why did we have to watch this?” Award: Amanda Serrano KO 1 Dahiana Santana – Second fight between them, same result. It was a mistake by Santana to accept this fight, considering her level of inactivity.

The “What else is on TV tonight?” Snooze of the Year: Daniela Bermudez vs Cintia Castillo –  Even though Bermudez picked up a new crown here (she actually recovered one that she had dropped before), the fight itself was not great. Bermudez’s quality did shine through occasionally against a brave opponent, but the fight was linear and without any memorable moments.

Fight of the Year: Terri Harper vs. Natasha Jonas – This was the fight of the pandemic season … hands down … male or female!

KO of the Year: Etsuko Tada’s KO in the 9th round over Ayaka Miyao – We are talking Minimum Weight (strawweight)!

Upset of the Year: Yulihan Luna Avila’s UD win over Mariana Juarez – We really didn’t see this one coming!

Prospect of the Year: Shannon Courtenay – She had two impressive fights this year and has really come a long way.

Advocate for Women in Boxing Award: Heather Hardy and her continued battle for equity for fighters in the sport.

Fight of the Year: Katie Taylor vs Delfine Persoon II

Upset of the year: Yulihan Luna vs. Mariana Juarez – Luna was not a boxer who was resonant in the boxing world, and this was the detail that made her victory against Mariana Juarez even more surprising.

Prospect of the Year: Kim Clavel – I really like her boxing skills. I feel like she is ready for more competitive fights and that without a doubt, she will surprise us in no time.

Most Uneven Fight of the Year: Seniesa Estrada vs. Miranda Adkins – I can’t believe a matchmaker would make a fight on these terms! Really deplorable. It could be the KO of the year, but given the lack of parity between the boxers, I will not award it as such.

Fighter of the Year:  Katie Taylor

Fight of the Year: Taylor vs Person II

KO of the Year: Etsuko Tada KO 9 Ayaka Miyao – Between two of ex-champions for a world title.

Upset of the Year: Yulihan Luna vs. Mariana Juarez

Prospect of the Year: Shannon Courtenay – She caught my eye when she lost in the battle with Rachel Ball. And she came back strong!

Fighter of the Year: Jessica McCaskill – Say what you want, but she had the biggest win of the year!

Fight of the Year: Katie Taylor vs. Delfine Persoon II – Delfine came out swinging, but Katie delivered a more decisive win this time around.

Upset of the Year: Cecilia Braekhus vs. Jessica McCaskill – #AllTheBelts

KO of the Year: Etsuko Tada KO 9 Ayaka Miyao – One and done.

Prospect of the Year: Kim Clavel – A few more rounds under her belt and we have some big money fights coming.

Statement of the Year: Melissa Odessa Parker’s performance against Brittney Sims – Google her fight, it’s worth the minute or so.

Fighter of the Year:  Katie Taylor – In any other year, we would have had choices. But this year the choice is clear: it’s Katie’s world and we just live in it.

Fight of the Year: Taylor-Persoon II – Forget about her titles: Taylor’s legacy was at stake here, and she left no doubt about why she is at least just a tad above the phenomenal Persoon.

KO of the Year:  Etsuko Tada KO 9 Ayaka Miyao – One-punch knockouts are a rarity, and this one was a picture-perfect, highlight-reel example. Beautiful finish.

Upset of the Year:  Yulihan Luna Avila vs. Mariana Juarez – Unless they discover a couple of horseshoes in Luna Avila’s gloves, this was one of the most brutal beatdowns in recent memory, and again an all-time great to boot.

The Norris-Santana ‘I Can’t Believe This is Happening Again’ Award: Amanda Serrano KO 1 Dahiana Santana – Seriously, there were better ways to make money legally before Christmas, even in the middle of a pandemic. Let’s hope they don’t try to imitate the Norris-Santana fiasco by making it a trilogy! Please!