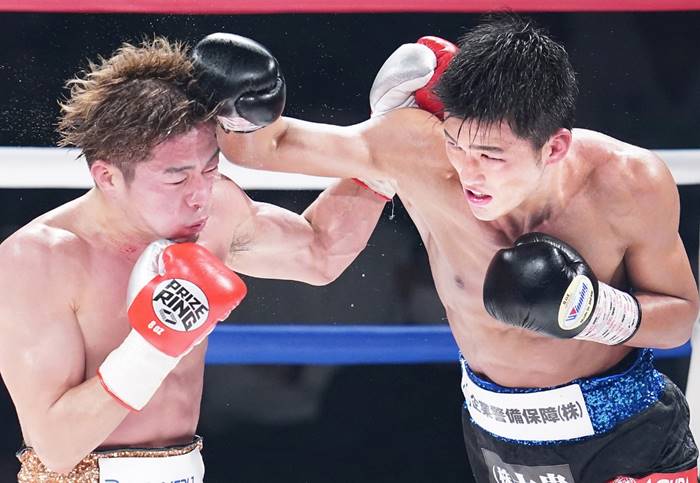 The highly anticipated bout was competitive from the opening bell. Ito pressed the action most of early rounds, but the taller Mishiro was effective boxing off his back foot with his precise jab. The punches of the 26-year-old Mishiro seemed to be cleaner, as he wobbled the popular Ito on more than one occasion. Ito connected with a few hard right hands in the 4th and 6th but couldn’t capitalize on those sequences.

After the fight, Mishiro called out Shuichiro Yoshino, 28, who holds the OPBF, WBO Asia Pacific and Japanese national lightweight titles. “I can beat Yoshino more easily. I want to fight around spring and beat him down,” said Mishiro.

In the semifinal, a former two-time world title challenger and current 122-pound contender Ryo Akaho (36-2-2, 24 KOs), 34, destroyed courageous but undersized Yuto Nakamura (11-6-1, 8 KOs) in the second round. A devastating right uppercut put Nakamura down and out. Time was 1:52.

A 140-pound slugger Jin Sasaki, 19, shined in the undercard. The sensational Sasaki dropped the 21-year-old Aso Ishiwaki (8-3-1, 6 KOs) twice in Tound 1 and once in Round 3 all by left hooks. The bout was halted by the referee at 2:50 after the third knockdown. Sasaki extended his perfect record to 10-0, 9 KOs.

Although the attendance was under 2000, the show was heavily promoted online with original content created by A-SIGN Promotions, including documentary films and interview sessions. The promotion, led by a 38-year-old Japanese promoter named Ichitaro Ishii, was apparently successful, raised a total of $370,000 in crowdfunding and more than 10,000 people watched the main event live on YouTube.