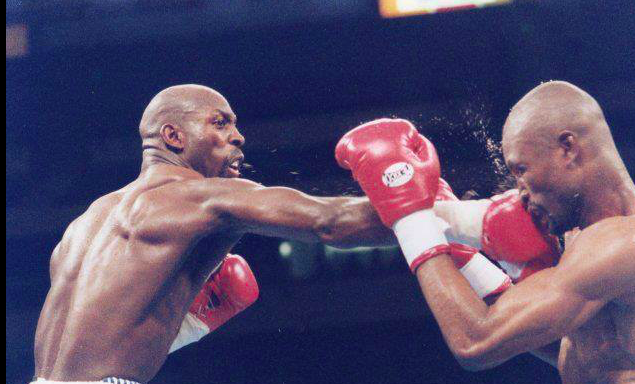 Highly skilled boxer Frankie Liles was a long-reigning WBA super middleweight champion for much of the 1990s.

Liles was born in Queens, New York on February 14, 1965. He was the middle child of three to a single mother, who moved her family upstate to Syracuse when Liles was young.

“Life upstate was tough,” Liles told The Ring. “My mother did everything to provide for me and my two brothers. She went to school to become a registered nurse.

“I started working odd jobs in a corner store, when I was about 11-years-old,” he said, laughing. “I would fill up the coolers with beer and soda and clean up, to contribute to the household. It was hard but it was fun.”

When Liles was 12, a friend of his told him about a local gym. Liles decided to check it out and things progressed and he found himself excelling.

All the while he continued his amateur career, winning Golden Gloves in 1986 and the U.S championships in 1987. He had hopes of representing America at the 1988 Seoul Olympics. However, he was in the same weight class as a certain Roy Jones Jr., who edged out him for the spot.

“I lost to Roy in the Olympic trials,” said Liles, who went 1-2 against Jones in the unpaid ranks. “He had to beat me because I won the nationals and I think I was the No. 1 in the world at the time. He had to beat me twice and I had to beat him once. I lost two, 3-2 split decisions.”

Liles services were widely courted and he decided to turn professional with Emanuel Steward at his famous Kronk stable in Detroit.

“My reason for going there was Thomas Hearns,” he admitted. “He was an idol, I loved walking in his footsteps, it was a privilege and an honor. He didn’t disappoint when I went to Detroit by taking me under his wing.”

Liles, who signed a three-year contract, learned a lot during his stay but decided to move on once his contract expired.

“I wasn’t getting the activity I wanted and wanted to take my talents elsewhere,” he said. “I had too much time on my hands in Detroit. There was a number of instances when I was told I was going to be fighting and I didn’t fight. It kind of upset me, I didn’t relocate to Detroit to be social and hang out.”

“Fabulous” Frankie heard Michael Nunn was leaving the Goossens, which opened up the opportunity to go west.

“They had a monthly show and could give me the activity I wanted,” he explained. “So, I said, ‘OK, I’m willing to do it’ and made a big leap to Los Angeles.”

Liles was unbeaten in his first 21 bouts when he met amateur rival Tim Littles for the USBA 168-pound title in July 1992.

“I got cut very badly on my top lip in the second round,” said the tall southpaw. “I had to get 11 stitches after the fight. I was reluctant being on the inside.”

That ultimately cost Liles, who lost a unanimous decision. He bounced back quickly by stopping teak-tough Merqui Sosa in the 12th round to win the NABF title. Liles was now working with Freddie Roach, who was cutting his teeth as a trainer, having learned from the late, great Eddie Futch, who died in 2001.

The unfashionable Liles traveled to Argentina, where he widely outboxed recently minted WBA super middleweight titleholder Steve Little, who had upset Nunn, in the summer of 1994.

In his first defense, Liles, no longer with the Goossens, bested Nunn in Quito, Ecuador in December 1994.

“I fought against a guy who wasn’t past his prime,” he said. “He was still someone who was very relaxed, very calm, very even tempered. I felt like that night I was the better person in the ring.”

Liles continued his globetrotting, fighting in Germany, England and Puerto Rico during his championship tenure exemplifying the term ‘world champion’: “I was willing and ready to fight anywhere or anybody.”

He didn’t always get along with his promoter, Don King, which stymied his activity.

“I had contract disputes with my promoter, Don King, so he would shelve me,” he explained. “I didn’t get the exposure I needed or was supposed to get and certain fights that were promised to me.”

The opportunity he craved the most was against WBC titleholder Nigel Benn.

“I really wanted that fight and that unification and it never happened,” he said. “I wanted to avenge my fallen team- mate Gerald McClellan. We came up as amateurs and then we were turning professional together with Emanuel Steward in the Kronk.

“I think Don could only do so much, I think Frank Warren had Nigel Benn at the time and the fight never manifested.”

Liles was inactive for 14-months when he returned and lost his title when unbeaten puncher Byron Mitchell came from behind to stop him to claim his title in June 1999.

“It wasn’t him, it was me,” Liles said. “I didn’t eat for three days making weight for the fight. When I look back it wasn’t him beating me, it was me beating me. He was a strong fighter.”

Liles attempted a comeback against former sparring partner Demetrius Jenkins in March 2003. However, he looked a shell of his former self and was stopped in seven rounds. He retired with a record of (32-3, 19 KOs).

Liles lives in Los Angeles and has two children. He remains involved in boxing, training at The Wild Card. He is also a co-ordinator for fitness and house manager for a drug and alcohol facility.

Michael Nunn: Michael had awesome timing and great natural ability. The way he put his punches together, he was very accurate. I just pressured him and used head movement and came back with my own combinations and jabs.

Tim Littles: The way I was able to get past that was I had known him for many years and I was able to study him. I was able to time his movements because that was a part of my strategy. He had really good head movement.

Littles: Tim was very talented and skilled. His timing was amazing, he did a lot of things well. It all started with him when he was very young, his trainer, Joe Byrd, I trained with them in the basement with one foot in the tire, going forward and back, side to side with one leg in the tire. The body movement he gave them, that Chris Byrd also possessed as a heavyweight, was all due to his father’s training. He had great hand speed.

Nunn: Michael Nunn and Tim Littles are two of the best guys I faced as my time as champion. Nunn always angled the right way, moved the right way. It was always difficult to make him make a mistake.

Don King: I would give credit to Mitchell because he was the guy who was able to dethrone me. Don King because for a long time he wanted to get control of the belt from me. Even in fights with Tim Littles, Michael Nunn, I had to go down Don King’s throat because Don wanted control of the championship and eventually, he got it from me. Don King was at the time the shrewdest guy in boxing. Eventually he was able to win.

Jaffa Ballogou: Very imposing but he wasn’t as sharp as other guys. He had the type of style that would walk you down and want to trade with you. Merqui Sosa was definitely a strong guy and somebody I respected a lot. I never wanted to get caught by him with anything flush. I would say Ballogou.

Ballogou: I hit him and nothing. He had a great chin.

Merqui Sosa: He was one of the guys who I had to be wary of his power. I think one of the things that helped him was his stance. Merqui was somewhat handicapped by his legs but in the ring, it actually helped him and added to his punching power. The way he would leverage himself to throw his over-hand right. Byron had a reputation as being a big puncher. Demetrius Jenkins was a good puncher. I would still say it’s Merqui Sosa.

Littles: He was a nemesis for me as an amateur and coming up as a professional he was someone I always knew if I faced him, I would have a difficult time.

Nunn: Michael was always known as “Second To” Nunn. He was a guy, as a young up-and-coming boxer, I looked to emulated. I looked at Michael as a very complete fighter.