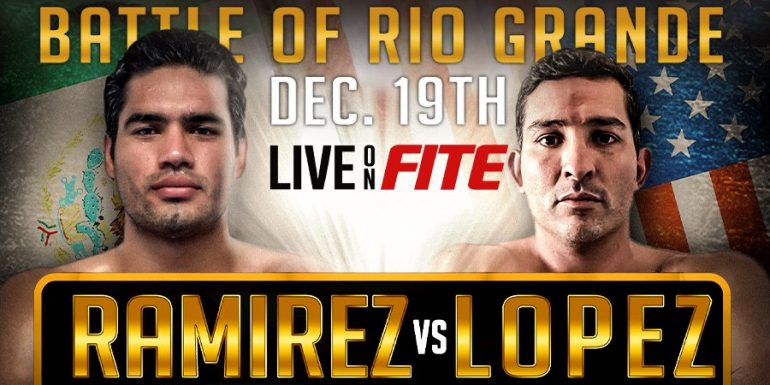 With the victory, Ramirez improves to 41-0, 27 knockouts.

The victory over Lopez also marked Ramirez’s first as a promoter. Ramirez, who resides in Mazatlan, Mexico, decided to become a promoter earlier this year after Top Rank released him from his promotional contract.

Lopez is a fringe contender who has promoted fights throughout Texas over the last couple of years. The 38-year-old entered the Ramirez fight having won his previous 10 bouts.

After a slow start in the opening round, the southpaw Ramirez dropped Lopez to the canvas in the second round. Lopez did not look visibly hurt from the punch and was game after beating the count.

Ramirez utilized lateral movement throughout much of the fight and was more effective as both fighters stood and traded in the pocket. With each passing round, Lopez’s punch output dropped as Ramirez was accurate with his two and three-punch combinations to the head and body. Lopez would fight in spurts and did well on the inside, particularly in Round 7, but looked fatigued in Rounds 8 and 9 as Ramirez’s punches landed more flush upstairs.

During the final round, Ramirez landed a left/right combination to the head, followed by another right. The combination seemed to stun Lopez but a devastating Ramirez right hook upstairs moments later dropped him flat onto the canvas. Referee Jay Nady immediately stopped the bout.

Ramirez told The Ring before the fight that he would like to face any of the world titleholders at 175 pounds but was hoping to land a fight against WBA titlist Dmitry Bivol, who he described as the most complete beltholder in the division.

In the co-feature, heavyweight contender Michael Hunter (19-1-1, 13 KOs), who is ranked No. 8 by The Ring, dropped Shawn Laughery twice en route to a knockout victory.

The win over Laughery was Hunter’s first fight since fighting to a draw against Alexander Povetkin, ranked No. 3 by The Ring, on December 7 of last year.

After scoring a knockdown in Round 1, Hunter was in control, walking Laughery down and battering him against the ropes. Laughery looked exhausted in Round 4 as Hunter pinned him against the ropes, letting his hands go. A five-punch combination dropped Laughery to one knee, where he remained on the canvas as he was counted out at 1:02.

Laughery, who resides in Oak Hill, West Virginia, falls to 10-4, 6 KOs. He took the fight on short notice after original opponent Chauncy Welliver backed out of the fight last week.