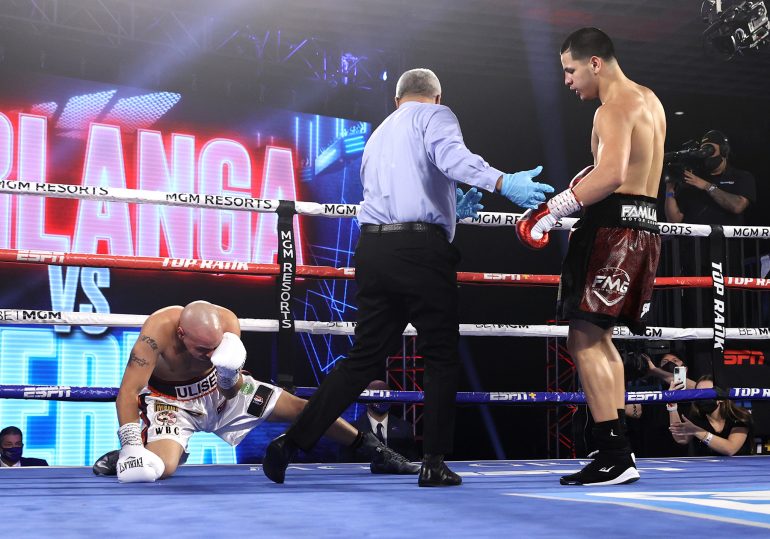 Once again, super middleweight prospect Edgar Berlanga needed less than three minutes to get rid of an opponent. Tonight, he dropped San Diego native Ulises Sierra three times before referee Russell Mora waved off the bout with 20 seconds remaining in the opening round.

Much was made of the fact that Sierra had worked with fighters like Canelo Alvarez, Jaime Munguia and others coming into this fight. But none of that fazed the New York based Puerto Rican. “Listen, I’m none of those fighters,” he said in the post-fight interview with ESPN’s Bernardo Osuna. “That’s what I told Sierra after the fight. I said “you’re in there with a real dude.”

This first round was just mass destruction.

Berlanga, without trainer Andre Rozier tonight due to a positive COVID-19 test, says his plan for 2021 is to get more rounds in. His team plans to step up the competition going forward. “The better opposition we fight, I believe we’ll get the rounds in,” he said. “We ended 2020 with a bang. 2021 is going to be a big year for us.”

Sierra, who had never been stopped prior to this fight, falls to 15-2-2 (9 KOs). The 31-year-old went the distance with undefeated Russian prospect Vladimir Shishkin in his previous bout. Many felt he would be the man to take Berlanga the distance, but the New Yorker’s power remains on another level.