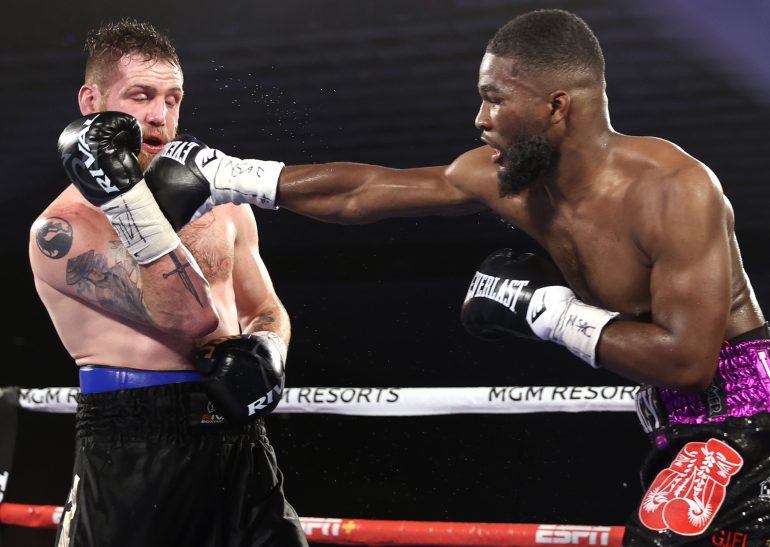 Quincy LaVallais beat Clay Collard to the punch throughout their middleweight bout tonight in Las Vegas. The Louisiana native blew up what had been a breakthrough year for Collard to this point.

Judges Lisa Giampa and Patricia Morse Jarman scored it 77-75 for LaVallais, while Tim Cheatham had it 78-74 for the same fighter.

These two had met once before, fighting to a split draw last June in New Orleans. Tonight LaVallais (10-0-1, 5 knockouts) looked like an improved fighter, using his length and hand speed advantage to outpoint Collard from the outside. Other than a small cut over his left eye caused by a clash of heads in the fifth round, LaVallais seemed to be in control all the way.

Collard, the Idaho resident who also fights in MMA, appeared to be outgunned through most of the fight. He tried to press the action in the middle rounds, taunting LaVallais to stand and trade with him, but he was never able to cut down the distance. Tonight’s fight was the sixth of the year for Collard (9-3-3, 4 KOs). He had been on a terrific run in 2020. Three of his five wins came against formally undefeated opponents who came in as favorites.

LaVallais, fighting for the first time in over a year, scored the biggest win of his career this evening.

Results for the remainder of the undercard:

Robeisy Ramirez won his fifth fight of the year, scoring a TKO6 win over Brandon Valdes. At the time of the stoppage, judge Adalaide Byrd somehow had the fight scored 48-47 for Valdes, while the other two judges had it correctly scored wide for Ramirez. The Cuban improved to 6-1 (4 KOs), while Valdes dropped to 13-2 (7 KOs). Ramirez, a two-time Olympic gold medalist for Cuba, continues to improve and develop as an intriguing featherweight prospect.

Haven Brady Jr improved to 2-0 (2 KOs) with a second round stoppage over Michael Land (1-2, 1 KO) in a four round featherweight bout.

Undefeated blue chip junior welterweight prospect Elvis Rodriguez (10-0-1, 10 KOs) was pulled off the card last minute due to a positive COVID-19 test. He was scheduled to face Irishman Lawrence James Fryers in what would have been his sixth fight of 2020.