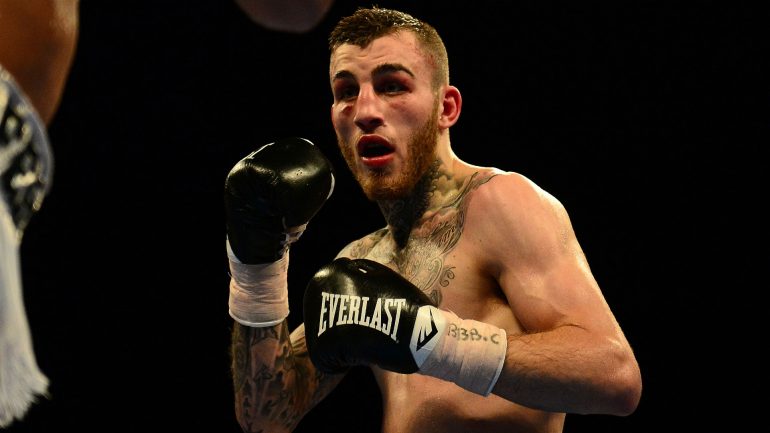 In a battle to stay relevant on the British junior middleweight scene, rugged Sam Eggington broke down stalwart Ashley Theophane to score a sixth round stoppage at the Fly By Nite Rehearsal Studios, Redditch, Worchester, England.

From the opening bell the naturally bigger Eggington used his size to bully Theophane. Eggington, who is 13 years Theophane’s junior, lived up to his “Savage” nickname and viciously attacked the body. It paid off late in the second round when he caught Theophane off-balance and scored the knockdown.

Over the next couple of rounds, Eggington relentless pressure began to tell. A big right shock Theophane, who held the British title at junior welterweight in 2011. The smaller man Theophane, who started his career as a junior welterweight, looked to use all his experience and guile to find a way into the fight but at 40 years of age it appeared father-time had caught up with him.

In the fifth round both men simultaneously landed hooks and it was Theophane who backed up, a clear sign the bigger and younger man was on top.

Good finish that by Sam Eggington. Some good domestic fights there for him at 154 👊🏼💥 pic.twitter.com/rcGZGMFehP

Eggington’s pressure paid off when he landed a right hook to the body, depositing his weary rival on the canvas. Although Theophane 48-9-1 (17 knockouts) made it to his feet, referee John Latham had seen enough and waved off the action at 2:58 of the sixth round.

Afterwards Eggington, now 29-7 (18 KOs), spoke to Channel 5 about the fight and his future plans.

“I’m over the moon. Back in August [against Ted Cheeseman] I felt like I was hard done by, I definitely thought I won the fight,” said Eggington. “I needed to come back with a good win and prove my point and I think I done that.

“As soon as we knew we was boxing Ashley, we knew he was tricky and hard to hit. You go for the bigger target. I thought I caught him with a few [body shots]. He’s really good at tucking up. It was hard to get through but the one’s that did get through I could feel they were working. So, I persisted with that.

“I’m quite happy to box [Cheeseman] in his back garden, I don’t mind where it is. I feel I won the first fight so why wouldn’t I? I’m not chasing anyone, I’m quite happy to push on with my career without following people about.”