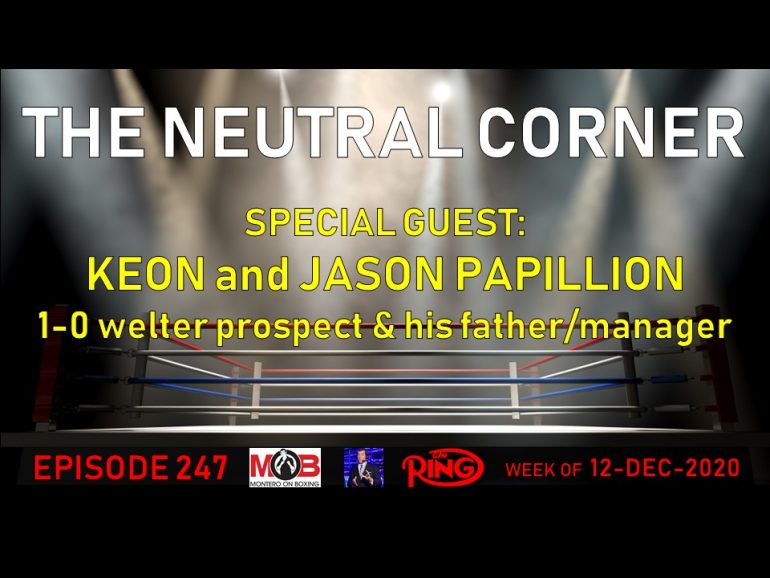 On episode 247 of The Neutral Corner boxing podcast, host Michael Montero was joined by welterweight prospect Keon Papillion (1-0), who fights this Saturday in Alabama. Papillion’s father, Jason, a former junior middleweight title challenger, joined on the line as well.

Jason, who co-trains Keon, says he wants to take all the hard lessons he learned over his time in the ring and use them to guide his son’s career the right way.

“I’m taking it back to the old days with how you build up a fighter,” he told the Ring, “not throwing them to the wolves too early just to have them on a big card and have them on TV. I want the best for my son. I want him to fight for a world title when the time is right. I’m going to guide him better than I was guided.”

Although Keon grew up around the gym, he didn’t take up boxing full-time until he was 15 years old. “I was playing other sports, football and basketball,” he said, “and I was good, but I wasn’t the superstar. One day I was walking home from football practice and I passed by the boxing gym. Some of the kids had picked on me and I wanted to get my payback. I decided that I was going to start training again.”

Keon made his professional debut back in February and had planned to fight several times this year, but then the COVID-19 pandemic hit. “It feels like I’m debuting all over again because of the long break,” he told The Ring. The Lafayette, Louisiana native and his father represent a new norm in the sport of boxing. Father-son corners were once frowned upon but are becoming very common in this era.

In Texas, Errol Spence defeated Danny Garcia by unanimous decision to defend his IBF and WBC welterweight titles. The fight headlined a PBC on Fox PPV card. Montero argues that although Garcia was a terrific junior welterweight, he never had an elite win at 147 pounds and was tailor-made for Spence in terms of styles. Nonetheless, considering all of the drama Spence has faced over the last year, he put on an outstanding performance. Unfortunately for fight fans, he expressed no desire to face Terence Crawford (who was in attendance at AT&T Stadium) in the post-fight interview.

This Saturday, December 12, there is action in both the U.K. and the U.S. In London, Anthony Joshua defends his unified heavyweight titles against Kubrat Pulev on DAZN. In Connecticut, Chris Colbert headlines a PBC on Showtime card. And in Las Vegas, Shakur Stevenson headlines a Top Rank on ESPN card.

Michael Montero can be found on social media via @MonteroOnBoxing. His podcast “The Neutral Corner” can be seen every Monday on TheRingDigital YouTube channel, and heard on audio podcast platforms around.