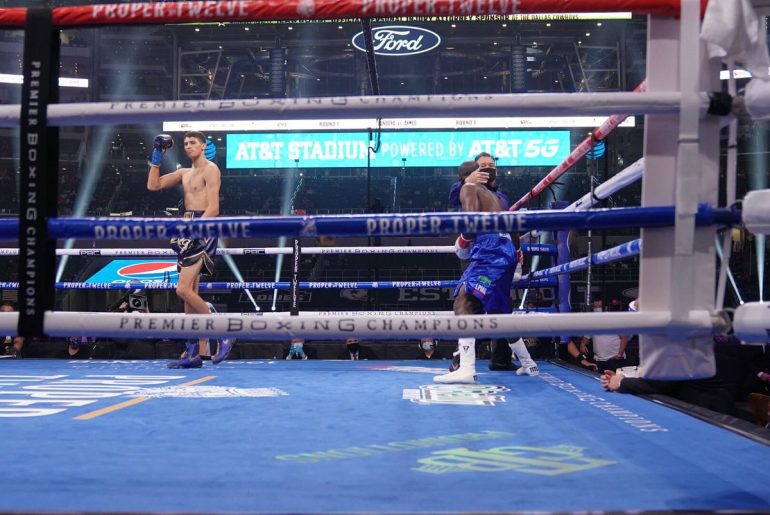 The last-minute change of opponent did not cause junior middleweight Sebastian Fundora any issues as he blew away Habib Ahmed in the second round of a WBA world title elimination bout on Saturday night at AT&T Stadium in Arlington, Texas.
Fighting in the co-feature of the Errol Spence Jr.-Danny Garcia Fox PPV card, Fundora took it to “Wild Hurricane” Ahmed right away and destroyed him.

Fundora was originally scheduled to face Jorge Cota (30-4, 27 KOs), but he dropped off the card a few days ago after testing positive for Covid-19.

“I want to fight anyone. The 154-pound division is stacked, so I’ll be ready for anyone,” Fundora said. “We were ready for anyone who we had to face tonight. A win like this doesn’t surprise me because we were so prepared. I feel like I’m meant for this. I’ve worked so hard for this. Me and my father have worked on this dream since I was eight-years-old. By now, big stages like this feel normal to me.”

Fundora, known as the “Towering Inferno” because he is 6-foot-6 – an anomaly for a fighter in the 154-pound division – went right at Ahmed in the opening seconds of the fight. He forced him to the ropes and rocked him with a heavy uppercut.
“I had the time to admire my work in round one,” Fundora said. “I was happy to enjoy it while I had the chance after I landed that uppercut.”

He continued to attack Ahmed with long uppercuts and right hands while Ahmed could not on the inside against Fundora’s long arms.

Fundora (16-0-1, 11 KOs), 22, of Coachella, California, strafed Ahmed with clean punches in the second round. He was pounding him along the ropes and Ahmed was not throwing anything back when referee Laurence Cole stepped in and waved it off at 1 minute, 30 seconds.

Ahmed (27-2-1, 18 KOs), 30, of Ghana, had only lost once before, in February 2018 when he suffered a sixth-round knockout challenging then-super middleweight world titlist Gilberto “Zurdo” Ramirez. But he came down in weight and found himself facing a much taller foe who has shown dramatic improve in recent fights.

“I don’t think I’m peaking yet. I turn 23 this month,” Fundora said. “I feel like I have a lot of room to grow. I’m going to be in this sport for a long time and I’m going to be champion, but we’re not there yet.”

Welterweight Josesito Lopez, a former welterweight and junior middleweight world title challenger trying to get back in position for another shot, laid a beating on Francisco “Chia” Santana en route to a one-sided 10th-round technical knockout victory.

Lopez (38-8, 21 KOs), 36, of Riverside, California, who is trained by Robert Garcia, got off to quick start by scoring a knockdown midway through the first round when he landed a series of punishing body shots and followed with a right hand to the head that sent Santana to the canvas.

Lopez consistently found a home for his right hand against Santana, who has never been known for his defensive ability.
Lopez had Santana (25-9-1, 12 KOs), 34, of Santa Barbara, California, in trouble during the fifth round, forcing him to the topes and nailing him repeatedly. Santana was forced to cover up and survived but continued to fall behind against a much fresher-looking Lopez.

Lopez, best known for his big upset ninth-round knockout of Victor Ortiz in a 2009 junior welterweight bout, popped his jab into Santana’s face, landed hooks and uppercuts and had his way round after round.

Lopez had a big ninth round. He pounded away and then forced Santana to take a knee while under heavy pressure with about 20 seconds left. He got up at eight, finished the round and then wobbled back to his corner.

About 45 seconds into the 10th round, a shaky Santana went down again under pressure, but referee Neal Young allowed the fight to continue. But moments later Lopez landed a few more shots and Young finally stepped in and waved off the shellacking at 1 minute, 22 seconds.

“Santana is one of the toughest fighters out there not holding a belt,” Lopez said. “He knew that if he made a small mistake he would pay for it. I made sure he paid and I dictated the pace with my jab while utilizing good footwork against a tough fighter. I was patient. He’s a tough, crafty fighter who can take good punches. He’s a solid fighter with a strong punch.

Lopez’s dominance was illustrated in the CompuBox statistics. He landed 190 of 677 punches (28 percent) and Santana connected with just 84 of 519 (16 percent).

Now, Lopez hopes to get another shot.

“If I’m not in with the best, I’m in with the toughest,” Lopez said. “I want one of the world champions or one of the top fighters. I deserve to be fighting the best now. I’ve proved it. I’d fight the winner or loser of tonight’s main event. Not only am I as good as any of them, but I’m one of the most entertaining fighters in the division.”

Santana lost his third fight in a row and for the fifth time in his last six fights.

“I thought I had something left, but after tonight I have to go back and talk with my family,” Santana said. “I think that was my last fight. I was able to do a lot of great things in the sport. No fighter ever wants to hang them up, but I thank God that I was able to meet so many great people in the boxing world. I might be retired as a boxer, but I’m still going to be around this sport.”

The first four rounds of the pay-per-view opening bout had been action packed with the fighters rumbling from the opening bell. But seconds into the fifth round, Ramirez, a southpaw, touched Flores with a jab and followed with a flush right hook that knocked Flores flat on his back.

Flores beat the count, but he was bleeding from the lip and wobbly, causing referee Laurence Cole to wave off the bout 20 seconds into the fifth round.

“I’m very happy about the win. I worked very hard and I’m thrilled to get the victory tonight,” Ramirez said. “This was all the result of the hard work I put into the gym. The Montiel brothers trained me well and it all paid off tonight.”

Flores (24-4, 12 KOs), 28, a Mexico native fighting out of Houston, was not supposed to be in the fight until a few days beforehand. He was originally scheduled to face Isaac Avelar in a 10-round preliminary bout, but when former junior featherweight world titlist Julio Ceja was forced out of his fight against Ramirez due to a positive Covid-19 test, Flores accepted the opportunity to move up the card for the bigger fight.

“This was a last-minute opponent. I didn’t get to train specifically for him, but I’m getting better every day in the gym, that’s my main focus,” Ramirez said. “I feel like I can beat anyone in this division. I don’t want to get too far ahead of myself. Whatever my team wants to do, we’ll talk about it. I just want to become a world champion. I’ll be ready anywhere at any time.”
Flores was disappointed the fight turned so quickly.

“I was having fun in there. I thought I was doing better on the inside than the outside with him. We were putting on a good fight,” Flores said. “He just caught me with one of those looping shots. It happens. It’s part of boxing. I’m a fighter and I’ll be back.

“I thought I hurt him with a few body shots and was coming on in the fight. I was effective on the inside. I thought I could have taken over, but he’s a crafty guy. It felt like an even fight.”

Flores and Ramirez were both coming off 13-month layoffs, having last appeared on the undercard of the Deontay Wilder-Luis Ortiz undercard in November 2019 in Las Vegas. Flores dropped a unanimous decision challenging junior lightweight world titlist Leo Santa Cruz. Ramirez (24-2-3, 11 KOs), 27, a southpaw from Mexico, knocked out Leduan Barthelemy in the fourth round.