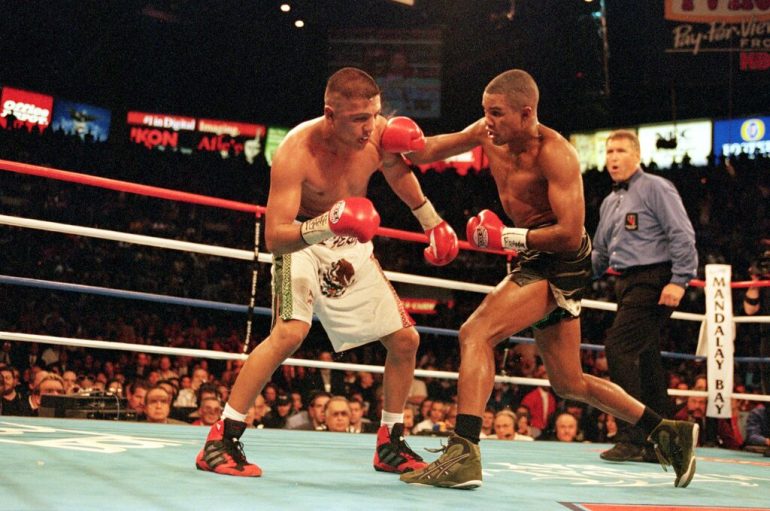 The fight was precisely 20 seconds old and the capacity crowd at the Mandalay Bay Events Center in Las Vegas exploded into a deafening frenzy.

Fernando Vargas had stepped forward with a left jab and when the punch reached full extension, for a split second, he’d dropped his right hand. The opponent, fellow unbeaten junior middleweight titleholder Felix Trinidad, had slipped the shot and put full leverage on a left hook counter that landed flush on the jaw. It was a direct hit like nothing Vargas had experienced in his three-and-a-half year professional career. It was also a moment that set the stage for arguably the finest 154-pound championship fight of all time.

Vargas, 22, was a decorated amateur star who had won a hoard of national titles and represented the U.S. at the 1996 Olympics in Atlanta. His style, however, appeared suited to the pro game, and so it proved when he won his first 17 fights by knockout, halting such formidable foes as Raul Marquez and Yori Boy Campas, whom he displaced as the IBF 154-pound titleholder.

At 21 years and five days, Vargas was the youngest fighter in history to win a championship in the junior middleweight division, and the great news for fight fans was that he’d take on anyone, anywhere, anytime. Following stoppage victories over the hopelessly outclassed Brit Howard Clarke and Marquez, the precocious young Vargas targeted bigger game – he insisted upon it. A close – and for some, controversial – decision win over the excellent Winky Wright was followed by a convincing points triumph over former welterweight titleholder Ike Quartey. With a fourth-round mauling of mandatory challenger Ross Thompson behind him, Vargas called for a unification battle with one of the finest pound-for-pound fighters on the planet. “El Feroz” feared nothing.

Trinidad, 27, was 38-0 (31 KOs) and a two-weight world champion. Thanks largely to a controversial 12-round majority decision win over Oscar De La Hoya in a welterweight unification bout, the legendary boxer-puncher from Cupey Alto, Puerto Rico, was now one of the biggest superstars in the sport. The De La Hoya triumph, in September 1999, marked his 15th successful defense of the IBF title, which he’d held for over six years.

Occasionally dabbling at 154 pounds during his title reign, Trinidad made an earnest and permanent debut at the weight in March 2000. He got off the floor at Caesars Palace in Las Vegas to systematically destroy 1996 Olympic gold medalist and Vargas teammate David Reid, then the WBA 154-pound titleholder, dropping the American four times in a massacre. Trinidad inflicted such savage punishment over the course of a 12-round unanimous decision win that Reid was never the same fighter again. Following a three-round battering of Mamadou Thiam in Miami, Trinidad was only too happy to accommodate Vargas. 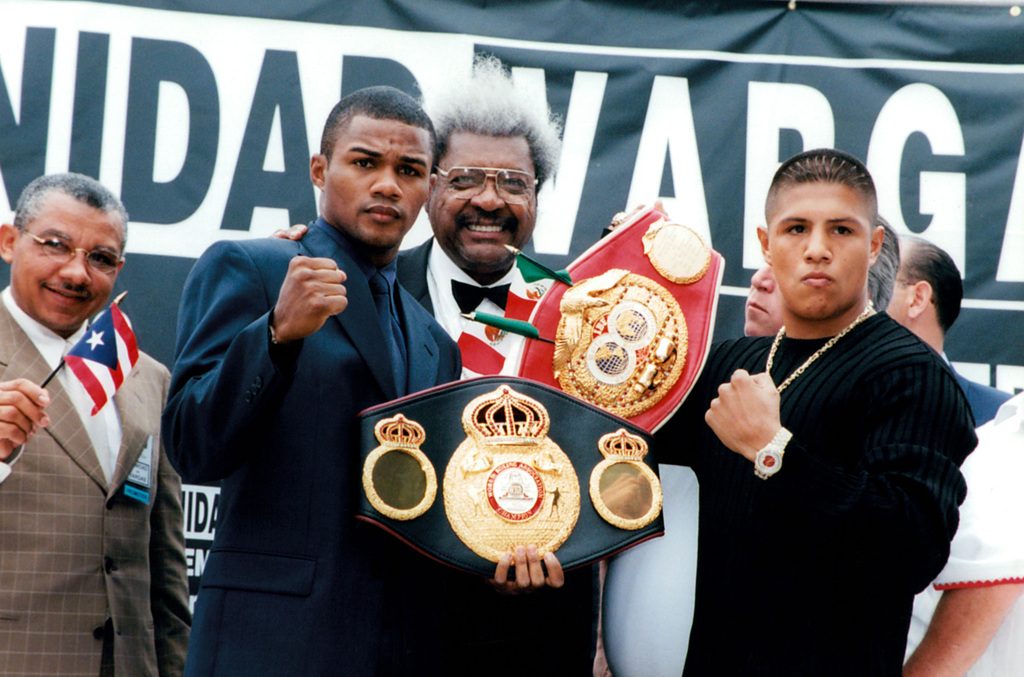 Trinidad, promoter Don King and Vargas at the pre-fight press conference. Photo from The Ring archive

The bout took place on December 2, 2000 and was dubbed “Forces of Destruction.” It was the main event on an HBO TVKO pay-per-view telecast assembled by lead promoter Don King, representing Trinidad, and Main Events, who had been with Vargas from the beginning of his professional journey. In a year that saw the curtain rise on the Marco Antonio Barrera-Erik Morales and Oscar De La Hoya-Sugar Shane Mosley rivalries, Trinidad-Vargas was the perfect encore for fight fans.

But with the bout not even 30 seconds old, Vargas was in serious danger of a humiliating defeat. Trinidad got off a few more big shots that toppled the young fighter and raced to a neutral corner convinced that he’d be sipping champagne in no time and leaving the arena without the need for a post-fight shower. No sooner was Vargas up than he was down again, courtesy of another left hook to the point of the chin. His cause now looked hopeless, but he survived the nightmare start – barely.

Belying his years, Vargas remained calm following the worst three minutes of his professional life. He boxed well in the second, kept his distance and forced Trinidad to reset his offense by staying on the move. By evading the concussive bombs that rocked his world in the first round, he competed on relatively even terms with his vastly more experienced opponent. In the third, Vargas, the bigger man, sought to make a physical impression. After troubling Trinidad with a shot to the eye, he targeted the damaged area on the inside with his left hand, scoring multiple times. In a timely move, Trinidad responded with a left hook directly below the belt and drew a stern warning from referee Jay Nady. But the discomfort from that infringement to one side, Fernando Vargas was on a high.

And things were about to get even better.

Early in the fourth, Vargas completely turned the tables when he scored with a compact left hook to the jaw that dropped Trinidad on the seat of his trunks. The Puerto Rican star rose gamely, but again he went low in what appeared to be a deliberate attempt to buy time. Nady deducted a point, which meant that Vargas had evened up the 10-7 round that went against him in Round 1. Prompted by his team, he smartly took a large portion of the five minutes that he was given to recover.

Keeping up the momentum, Vargas outboxed Tito throughout the fifth and most of the sixth. But like so many great champions have done in the past, Trinidad adjusted near the end of that session and began slamming home the power shots. A point deduction for another low blow seemed harsh as an isolated incident, but there had been a significant change. The great Trinidad was now in top gear. While Vargas enjoyed success in rounds seven through eleven, he was on the wrong end of some awesome exchanges. The Californian was shaken up by a powerful combination in the ninth, and a low-blow point deduction in the 10th was a penalty Vargas could ill-afford on the cards.

Entering Round 12, Vargas needed a knockout but ended up on the receiving end of one. The signature left hook of Trinidad hadn’t landed with maximum impact since the chaotic opening minute. That evil weapon had lain dormant but the bell for the final round had awoken it. With a minute gone, a short right landed flush on Vargas’ chin and, in defiance, the younger man gave his opponent a derisive sneer. Trinidad closed in with a right and the follow-up left hook swiveled Vargas’ head and dumped him on the canvas. Fatigued and worn down by his own effort and over 30 minutes of punishment, Vargas, this time, could not recover. When he rose unsteadily, Trinidad approached with his right hand cocked. He merely touched the stricken fighter’s guard, which disguised another quick left to the chin for a fourth knockdown. The warrior within Vargas pulled him upright once more. If he couldn’t win, Vargas was pushing for the heroic ending that he could live with in defeat. Trinidad closed with a powerful right on an open target. The official time was 1:33.

An explosive start, incredible ebb and flow and an unforgettable ending – this was boxing at its best.