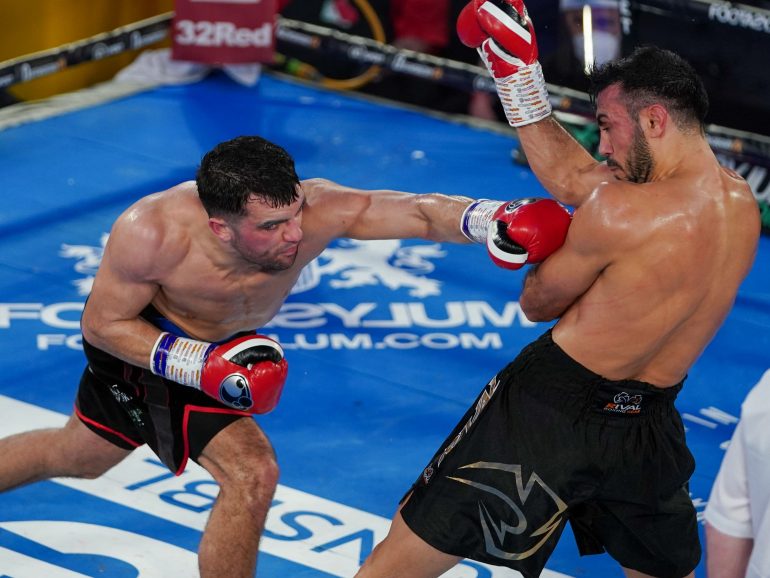 Catterall (left) had too much savvy for the visitor. Photo courtesy of Queensberry Promotions
28
Nov
by Tris Dixon

The stakes were high for Jack Catterall when he met Abderrazak Houya in the highest profile bout on the Dubois-Joyce undercard. Catterall is in pole-position with the WBO at 140 pounds but has agreed to let Jose Ramirez meet Scot Josh Taylor in an undisputed championship fight on the understanding that he gets a crack at the winner.

Catterall’s workmanlike win didn’t overly impress Taylor, who mid-fight tweeted, “Levels to this game & I’m on a level on my own.”
But Houya’s face was swelling by Round 5 and Catterall looked more aggressive with his straight left as the fight wore on.

He stepped it up further still in the sixth, catching Houya with a peach of a left hand that sent the visitor spiralling to the deck for the first time.

The Englishman was firmly on the front foot through the eighth and Houya, who had moderate success with the right hand in the seventh, grimly tried to stay with Catterall and keep him at bay, but he was getting worked over both on the inside and at range.

A sweeping overhand left felled the France-based Tunisian again in Round 9 and they touched gloves as they came out for the 10th and final session but Catterall was still the boss, winning 99-90 for referee Victor Loughlin.

“I enjoyed that,” Catterall said. “It’s been a year out of the ring and it’s 10 rounds in the bank and ‘Boom’, move on to next year and I’ll look forward to big fights.”

Hamzah Sheeraz, a 21-year-old junior welterweight prospect, stopped an overmatched Guido Nicolas Pitto in the 10th of a one-sided affair.
Sheeraz, long and rangy and with good variety, started quickly, firing in straight shots, working the body and covering up well but was seemingly leagues above 33-year-old veteran Argentine Pitto, who was getting picked off.

Sheeraz was on top again through Round 2, looking imposing behind uppercuts and a cultured left hand, and in the next session he covered up and let Pitto fire away at him. Sheeraz, however, came out firing and landed plenty of hard, hurtful and stinging shots as the round progressed.

The Ilford man worked as a lefty for part of the fourth and he let Pitto do a lot of the work, but a weary Pitto bled from the nose in the sixth.

Sheeraz was in control and boxing well within himself but Pitto was game, plucky and earning his money the hard way.

Hamzah, just 21 and now 12-0, turned the screw in Round 9 and in the 10th cut loose with a barrage behind a couple of big rights and the referee intervened.

A second-round right hand was enough for heavyweight prospect David Adeleye to curtail the evening of Danny Whitaker. Londoner Adeleye improved to 4-0 (4KOs), Whitaker is 4-2.