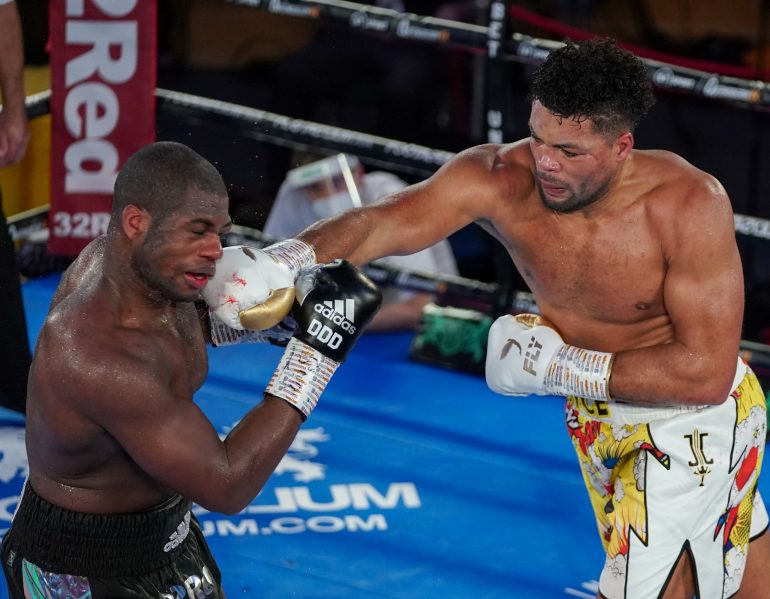 Joe Joyce won the most-anticipated British heavyweight fights in years after stopping highly-touted Daniel Dubois in Round 10 of an enthralling fight at Church House in Westminster, London.

Joyce, a 2016 Olympic silver medallist, silenced the doubters who said he was too slow and too basic by turning into a smart moving boxer, utilising a wonderful left jab, clever footwork and showing once again that his head is made out of concrete.

“[Aleksandr] Usyk,” he said, when asked who he wanted to fight next.

He won the British and Commonwealth titles by defeating Dubois, while promoter Frank Warren talked of a possible Joyce-Dubois rematch, which anyone watching tonight surely would not mind seeing.

But Joyce is 35 and has been on the fast-track since turning pro in 2017. Dubois will need to mend physically and psychologically. His left eye had been slammed shut and when the end came, after 36 seconds of Round 10, he cut a forlorn figure.

As Dubois stepped in with his own jab he took a hard left from Joyce directly on to his swollen optic. He ‘showed out’ and sunk to one knee, clearly in discomfort.

Referee Ian John-Lewis picked up the count and Dubois sprang up at ‘10’ but that hollow gesture was too late.

Joyce, a 3-1 underdog, who has now scalped Dubois, Bermane Stiverne and Bryant Jennings, had sprung an upset even though many within the sport had tipped him. He is now 12-0 (11KOs).

Joe started the fight with a plan and followed it right the way through.

Without trainer Ismael Salas in his corner, who’d tested positive for COVID-19 during fight week, he drafted in Stephen Broughton and Jimmy Tibbs, and he worked behind a crisp, pesky double jab and was up on his toes from the off.

He is called ‘The Juggernaught’ but he had Dubois looking one-paced and one-dimensional early on.

Daniel started the second round with more intent and connected with a good right hand, following it through the middle with a hard left, but Joyce was never flustered. Even when Dubois, 23, had his moments clubbing away as Joe took to the ropes, the older man seemed just fine.

By the end of the fourth Dubois’s eye was rapidly worsening and there seemed to be nervous moments in the corner as coach Martin Bowers tried to motivate him.

Conversely, in the other corner, Joyce looked serene.

Dubois was reprimanded for dropping his hands by Bowers between the sixth and seventh and his charge came out for Round 7 hard and fast. But Joyce weathered an early storm and landed a superb short right hand of his own.

Referee John-Lewis warned Dubois to keep his punches up in the eighth in what was a quieter session until both enjoyed moments of success as the round closed.

Dubois had no answer for Joyce’s jab, particularly when he doubled it, and – by the ninth – one wondered whether Joyce had loaded his skull with concrete. The numbing power of Dubois was simply having no effect.

Daniel trudged out for Round 10 having begun to look dejected and, with his eye completely closed, the fight was over moments later.

“What can I say, he caught me with a good jab,” conceded Dubois. “I couldn’t see out of the eye. I can’t explain. I was trying my best and this happened. I’m a tough guy, I’ll come again for sure.”

When asked what his first thoughts were when Dubois stayed down, Joyce joked, “I was glad it was over!”

He continued: “I wasn’t ever hurt. Daniel’s got some power and he’s young, fresh and hungry and I’m blessed with a good chin, so I can keep going and keep moving forward. I felt his power and was happy to take it and keep it moving forwards. I started looking at that eye, it was starting to swell and I was moving away from his right hand and trying to stay off the ropes.”

So Joyce wants Usyk. Warren mentioned the rematch. Dubois, however, who is now 15-1 (14KOs), may need to rebuild and pick up the kind of experience he lacked heading into this one.