Daniyar Yeleussinov wants to show his boxing style works in the pros, too 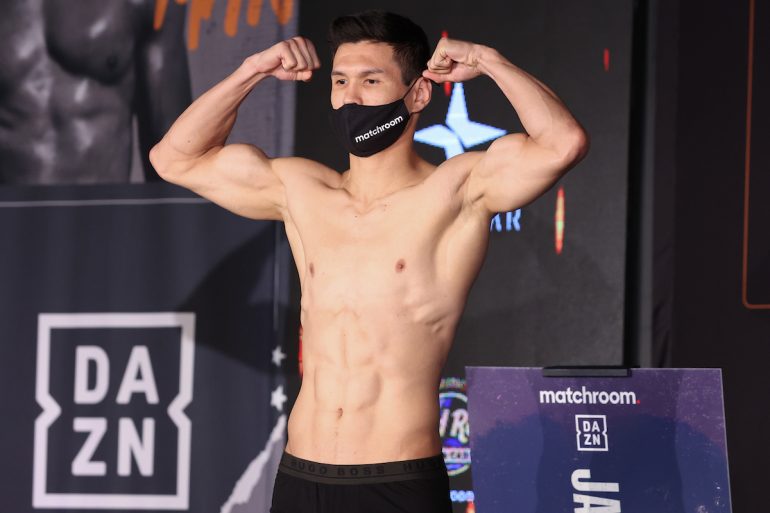 Daniyar Yeleussinov steps on the scale to weigh in for the November 27, 2020 Matchroom fight card in Hollywood, Florida. Photo by Melina Pizano/Matchroom.
26
Nov
by Ryan Songalia

Daniyar Yeleussinov isn’t saying anything revolutionary when he voices his disappointment in 2020. The 29-year-old from Kazakhstan had been expecting to return to the ring in April before the Covid-19 pandemic put a freeze on sports in the United States and around the world.

“This is boring, really,” said Yeleussinov (9-0, 5 knockouts), who won the welterweight gold at the 2016 Olympics. “Waiting, training.”

The wait ends this Friday, when he faces former unified junior welterweight titleholder Julius Indongo at the Seminole Hard Rock Hotel and Casino in Hollywood, Florida. The welterweight bout will be part of the Daniel Jacobs vs. Gabriel Rosado card that will be promoted by Matchroom Boxing and air live on DAZN.

Heading into his tenth bout, Yeleussinov figures now is the best time to answer the number one criticism that has been lobbed his way in the two-plus years since he turned professional. Despite scoring stoppages in his last two fights, Yeleussinov says he’s been criticized for still having an amateur style.

The criticism has followed him since early on, when former amateur rival Josh Kelly, whom Yeleussinov beat in the Olympics, vowed revenge, saying he’d made a smoother transition to the pro style.

“I want to show my talent, my speed, power and that my timing is good,” said Yeleussinov, in English that has greatly improved since he began training in South Florida. “I want to show everybody who is saying that I didn’t have power, that my style is not for professional boxing.”

“I understand what they’re saying, [but] it’s only been two years in pro boxing,” said Elvis Crespo, who co-manages Yeleussinov with Ziya Aliyev. “With a person being in boxing for 13 to 15 years being taught how to fight the amateur system, it’s gonna take a while.”

“I think this is the fight where he can prove they are wrong,” said Aliyev. “We read about that a lot, these are the fans, you can’t please everybody.”

Indongo (23-2, 12 KOs) of Windhoek, Namibia will be by far the most experienced pro Yeleussinov has faced. He achieved breakout success in 2016, knocking out Eduard Troyanovsky in one round to win the IBF junior welterweight title, and then followed it up a few months later with a dominant win over Ricky Burns to unify the WBA title as well.

The 37-year-old lefty has cooled off significantly since then, losing by knockout in back to back fights against Terence Crawford and Regis Prograis, in the third and second rounds respectively, before returning in 2019 with a second round stoppage of Carltavius Johnson.

Yeleussinov acknowledges the temptation to try to keep pace with the early finishes by Crawford and Prograis, but says he isn’t going to rush or force anything.

“If you rush you can make a mistake. That’s why I need the first rounds to box. But I’m going to try. This is boxing, I need to see it in the ring. I need to watch what he’s doing,” said Yeleussinov, who weighed 146.6 pounds on Thursday, slightly below the 146.2 pounds that Indongo weighed. 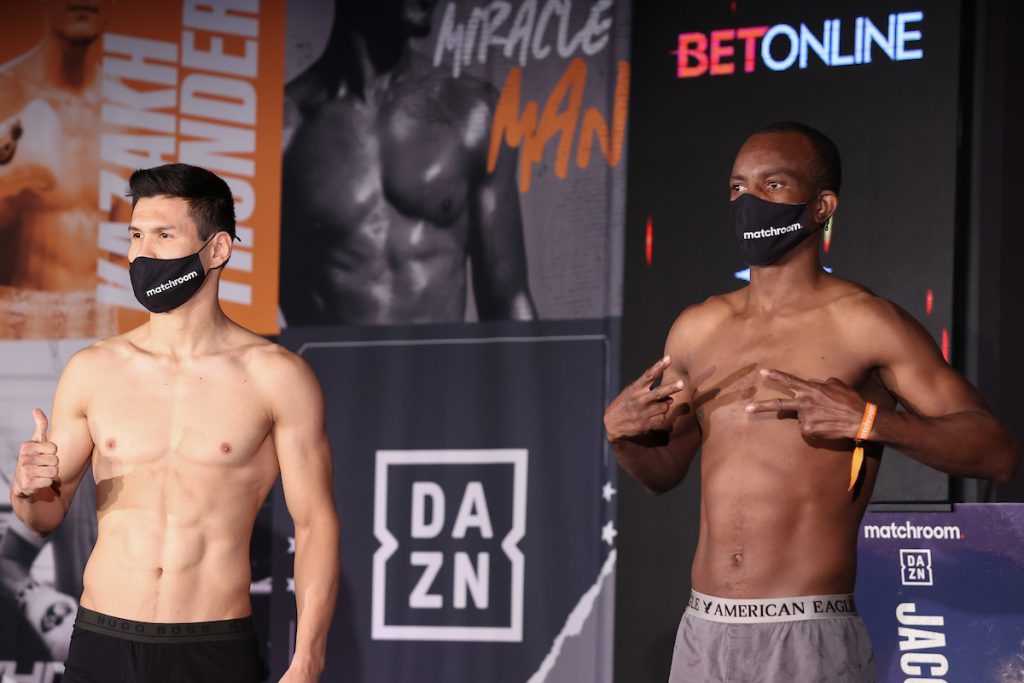 Daniyar Yeleussinov and Julius Indongo pose after weighing in. Photo by Melina Pizano/Matchroom.

Yeleussinov hopes 2021 will be a better year for him, one that he ends with a world title around his belt. His preference would be to face Errol Spence Jr. or Crawford, but he says he isn’t going to talk trash or talk out of turn. That’s a long ways away, and he’s got Friday to worry about first.

“After I change my level in this fight, maybe we will be interim and regular [champion], and after that I will focus on big names and big fights,” said Yeleussinov.

“To call out Errol Spence, we can do that, but let him earn it,” said Crespo. “He wants to take it fight by fight, and hopefully that opportunity comes there.”