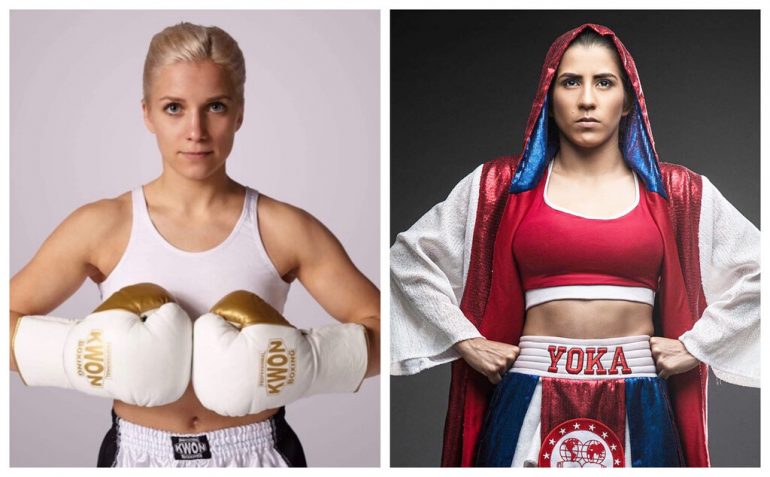 The new COVID-19 restrictions implemented across Europe have forced the postponement of The Ring’s inaugural strawweight championship fight between Germany’s Tina Rupprecht and Yokasta Valle. The bout was originally scheduled for December 12th but will now take place on January 16th in Valle’s home turf in Costa Rica.

Along with The Ring’s 105-pound title, both Rupprecht’s WBC belt and Valle’s IBF title will be at stake, in what will be a rematch of their previous title bout, won by Rupprecht in Germany in June 2018.

Rupprecht (10-01, 3 KOs) stands to become only the second German fighter to hold a Ring title belt since Max Schmeling. Valle (20-2, 9 KOs) was born in Nicaragua, a country that boasts five Ring title belt holders (Eddie Gazo, Alexis Argüello, Ricardo Mayorga, Roman Gonzalez and Rosendo Alvarez), but she has lived her entire life in Costa Rica and considers that country her true homeland, and thus she would be the first-ever Costa Rican fighter to grab a Ring belt, regardless of gender.

“Of course I would have liked to box in front of my home fans in Berlin,” said Rupprecht, though a press release. “I am fully aware that we are going to the lion’s den and that it will be very tough. But if I wasn’t convinced that I could do it, I wouldn’t do it.”

Rupprecht’s manager Peter Schulze added, “We were hoping the possibility would present itself after the lockdown, but it doesn’t look like it at the moment. The risk to go through with it is too high, because we cannot manage the event financially without spectators.”

After failing in her first two title attempts abroad (in Japan against Naoko Fujioka in December 2017, then in Germany against Rupprecht), Valle finally grabbed her first title in another overseas opportunity, when she defeated Joana Pastrana in Spain to lift the IBF belt in 2019. She has already made one defense in her home country but having the support of her compatriots in this new challenge makes a huge difference as she finally has the chance to have a career-defining fight at home.

“This is the best news that my team could have received”, said Valle in a phone message. “In these times of the pandemic, patience is a big virtue, and I am blessed to have the support of my entire country. I trust that my team will get me ready for January 16, just as I was going to be ready for December 12th. The world will know that I am the true champion of the world if I win this fight, God willing, and I will make history for Costa Rica and Latin America by being the first Latina to win this prestigious title. I respect my opponent, but I am ready.”

As much as the risks of COVID-19 were responsible for the cancellation of the fight in Germany, the same reason was a positive consideration for Valle’s manager to move the bout to Costa Rica. And the historic importance of the title at stake did the rest.

“Definitely, The Ring title has helped us a lot to make the fight in Costa Rica,” said Mario Vega, Valle’s manager, in a phone message. “For many of the companies that sponsor Yokasta, with whom we’ve worked for a long time, this was the most important thing, to have her fight for such a prestigious title. For us, the most important thing that we want to achieve is to let the world know that our country is still open in spite of COVID-19. Our country depends heavily on the tourism industry, and we have a great health system. And for that reason the government decided to open up the borders. In fact, you don’t need a COVID test to get in the country.

“Everything is in line to have a great show on January 16th. And we’re honored to do it in Costa Rica. We’ve done a lot of world title fights here, and Costa Ricans support their female champions a lot,” added Vega, referring to the widely popular Hanna Gabriel as an example.