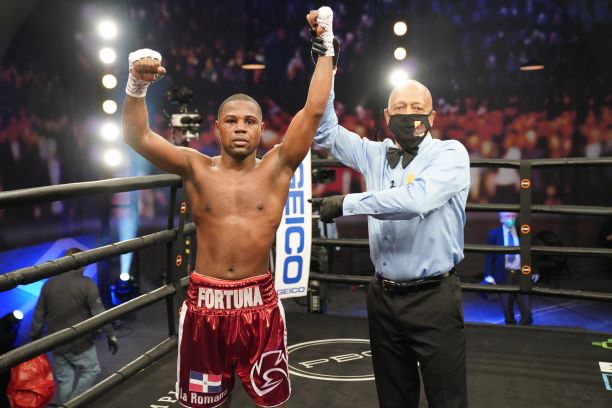 It seemed strange at the time, when Javier Fortuna pulled his hood over his head and curled up on the canvas like he was ready for a nap. He just stopped Antonio Lozada for his third-straight victory, and the former junior lightweight titlist did it on national TV Saturday night, as the main event on the FS1 PBC Fight Night card.

Maybe Fortuna (36-2-1, 25 knockouts) was sending a message with the gesture to the rest of the 135-pound contenders out there: Don’t sleep on him.

It had been a year and 20 days since Fortuna last fought, but if there was any ring rust, it certainly wasn’t evident.

Based on his dominance of Lozada at the Staples Center in Los Angeles, California, Fortuna’s name has to be under consideration for a possible 2021 title fight with WBC secondary titlist Devin Haney or world lightweight champion Teofimo Lopez.

Lozada, a 6-foot lightweight, appears to be a mere shell of the fighter who once upset unbeaten Felix Verdejo in March 2018 by 10th round knockout. Since then, he’s gone 1-3-1 in his last five fights.

Finally, in the sixth, Fortuna snuck in a left to Lozada’s chin. Seconds later, he landed a right hook, causing Lozada to retreat to the ropes. Fortuna followed, landing a barrage of punches, forcing referee Gerald White to look closely.

Then, after a head-snapping straight left, White knew the end arrived. He widely stepped in to stop it at 2:34 of the sixth.