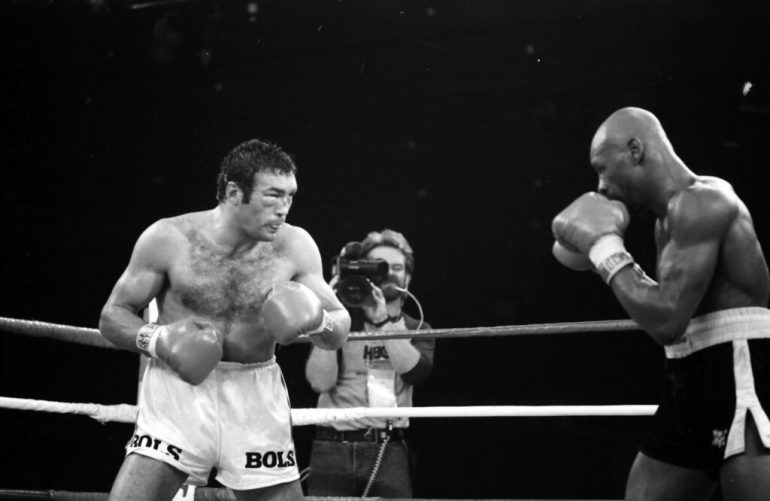 Juan Roldan (L) fights on through a swollen eye in his middleweight title challenge against Marvin Hagler. Photo by The Ring Magazine/Getty Images
18
Nov
by Diego Morilla

The legend of boxing’s “Four Kings” would not be the same without the epic stories of the many princes who questioned their reign and attempted an assault on their dominance of the boxing landscape in the ‘80s. The scene of Benitez troubling Leonard with his defensive prowess and then beating Duran, and the sight of Barkley upsetting Hearns in his prime were a few of them.

“The Hammer” came as close as any of them to toppling the apple cart and disrupting one of the greatest four-way rivalries in history.

Juan Domingo “Martillo” Roldan, who passed away today from complications of COVID-19, was a tough-as-nails, barrel-chested middleweight contender who challenged three future Hall of Famers for the middleweight crown, always falling short but never failing to live up to his moniker.

His hammer-like fists carried as much power as his compatriot Carlos Monzón, but were significantly stronger due to his relatively privileged upbringing, at least compared to Monzon’s. Born in the province of Cordoba in a family of dairy farmhands, Roldan was raised on a diet of the richest cream and the fattiest meat on Earth, and developed an imposing physique that contrasted notoriously with Monzon’s malnourished frame.

The lack of worthy opponents and training facilities in his small town (with a population of 5000, even today) led him to an unlikely debut in the wildest of all combat stages, when he went toe to toe with Bongo the Bear in the main rink of the Circo Monumental and held his own in spite of his young age (16) and the alleged 110-pound difference between them.

Upon hearing the story, his father’s employer set up a small gym in his barn for him and his brother to hone their skills, and soon enough Roldan was roaming the countryside looking for opponents, preferably within the homo sapiens branch of the local fauna.

Eventually, he would leave his father’s flock to become part of a much more promising stable: the fabled Luna Park gym, under the bleachers of the stadium. Hall of Fame promoter Tito Lectoure took him under his wing, and he proceeded to demolish one opponent after another, including notorious gatekeepers of the day such as Juan Carlos Peralta, Ricardo Arce, and the Flores Burlon brothers (Jose Maria and Carlos).

His first opportunity to shine under the spotlight took place in Las Vegas, where he demolished Frank “The Animal” Fletcher with a thunderous right hand that caught the attention of the boxing world on the Duran-Hagler undercard, in November of 1983.

Five months later, Roldan faced Marvin Hagler for the middleweight crown. Fresh off a razor-thin win over Roberto Duran, Hagler was under heavy scrutiny by the boxing connoisseurs, who felt that “Marvelous” was about to be seriously tested. The first round provided both the test and the answer when a short right to the chin forced Hagler to shelter behind his gloves and lower his head, and then he fell to the canvas after what looked like a borderline rabbit punch. Valid or not, the knockdown still remains Hagler’s first and only trip to the canvas.

Roldan’s contribution to boxing history, however, would come later.

In the 3rd round, Hagler landed his most consequential strike of the soirée: a thumb straight into Roldan’s right eye, in what became Hagler’s second-lowest point of the fight. With his vision impaired from then on, Roldan fell prey to Hagler’s power, and surrendered in the 10th round, exhausted and partially blind.

The loss would later provoke another physical injury, when Lectoure broke his hand after punching a bathroom door in frustration and then joined Roldan in his trip to the hospital to receive care. But the most enduring legacy of the fight happened when Sugar Ray Leonard, inspired by his closing arguments as commentator of the fight along HBO’s Barry Tomkins and recovering from a gruesome eye injury himself, decided to campaign for the widespread adoption of a recent change in the design of the boxing glove that still remains the standard to this day: the “attached thumb” or “thumb-less glove”, in which the only protruding finger of a fighter’s hand became permanently enjoined with the rest of the mitt in order to prevent eye injuries (both accidental and intentional, as they had been during decades). 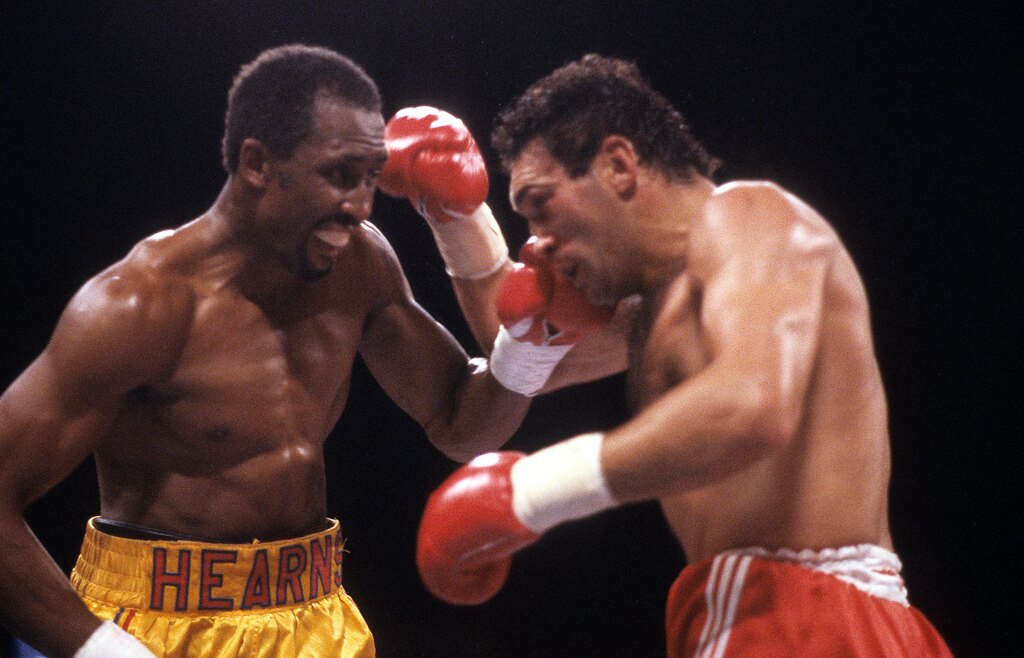 It would take three years for Roldan to regroup and challenge once again for a piece the middleweight championship, and his opponent would be the formidable Thomas Hearns, already a three-division champion at the height of his powers. Roldan went down twice in the opening round and once in the second, but he found his rhythm in the third and came close to becoming only the third man to stop the “Hitman” when he badly wobbled him with a barrage of punches in the early going of the fourth, only to succumb later in the round and be counted out.

Even in defeat, he would make another contribution to boxing history by allowing Hearns to become the first man ever to win titles in four divisions (Hearns grabbed the vacant WBC strap). Roldan’s only excuse to lose was his ongoing divorce with his first wife, who had ominously promised that she’ll be “praying for him to lose” what could have been the most important fight of his life.

Roldan would fight twice more, defeating former champ Hugo Corro in the process, before challenging then-unbeaten IBF middleweight king Michael Nunn in 1988. Roldan was stopped in the eighth round and retired after the bout.

With his ring earnings, he bought the same 80-hectare dairy farm in which his father was an employee in his youth, becoming a successful rancher and businessman. As fate would have it, he would end up enjoying too much of his own product, becoming obese and developing hypertension after indulging in one barbecue too many, most often as a generous host to a flock of former foes, journalists, friends and family.

He was diagnosed with COVID-19 only three days before his death. He passed away at the J. B. Iturraspe Hospital in San Francisco, Córdoba, the same town in which he was born 63 years prior.

He left behind a record of 67-5-2 with 47 knockouts, and the memory that it took three of the best middleweights kings in the last quarter of the 20th century to keep him away from the throne.