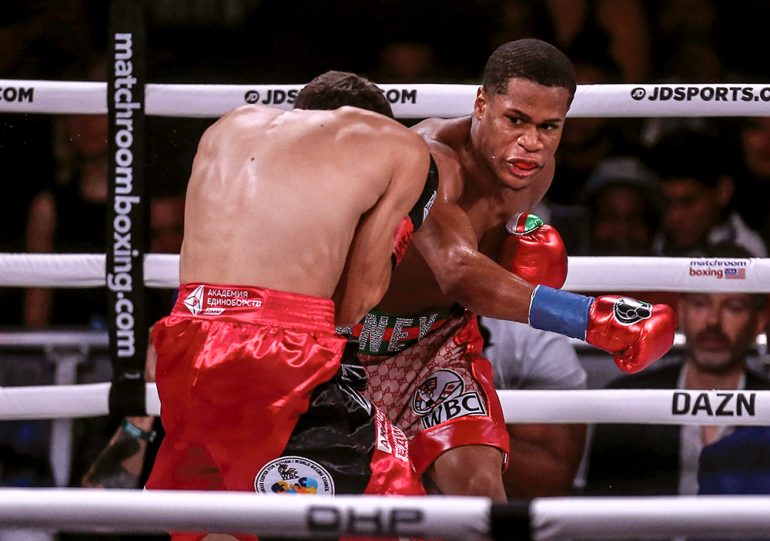 Devin Haney wasn’t fazed by it. He heard it and it went through one ear and out the other.

The undefeated 21-year-old lightweight holds what can be defined as the “secondary” WBC lightweight title. Teofimo Lopez holds the title as lightweight world champion, by Ring Magazine, the IBF, WBA, WBO and the WBC’s “franchise” beltholder.

When Haney’s name was broached to Lopez after his unanimous decision victory over Vasiliy Lomachenko on Oct. 17, “The Takeover” said, “Devin Haney doesn’t count.”

Haney (24-0, 15 knockouts) will count this Saturday to someone, when he takes on veteran Yuriorkis Gamboa (30-3, 18 KOs) at the Hard Rock Live at Seminole Hard Rock Hotel & Casino Hollywood, Florida, live on DAZN.

When Haney heard Lopez’s comment, he blew it off. He had a fight to prepare for.

“That’s how Top Rank (Lopez’s promoter) and Teofimo are trying to sell it, that a fight with Devin Haney doesn’t count, but that’s where the fans are stepping in and saying, ‘Hey wait, this guy actually does count; his belt actually matters,’” Haney said. “My belt does matter. I matter. The Lopez victory means a lot for me, because it is a fight the fans want to see. Lopez-Haney is the biggest fight in the division. I still have someone tough in front of me.

“Gamboa is not an easy guy. He is a tough guy, and lot of people need to understand that. He took Tank Davis 12 rounds and the guy was in that fight for 12 rounds (in Dec. 2019), before he tore his Achilles. I’m ready, I’m going to come hard at this guy. This is my chance to prove what I can really do.”

Haney will be fighting for the first time since November 11, 2019, after undergoing shoulder surgery in December 2019 to repair a microscopic tear in his right labrum. He says he’s strong and in great shape. But as the fight nears, he’s been spending more time talking up his opponent, Gamboa, trying to convince boxing people that this is a viable fight.

“People shouldn’t look past Gamboa,” Haney stressed. “They may think this is supposed to be easy. Gamboa never makes anything easy. I wouldn’t want an easy opponent. I still have some things to prove.”

Haney said his right shoulder completely fell out of the socket in the 12th round of his last fight, a unanimous decision over Alfredo Santiago on Nov. 11, 2019. Gamboa underwent surgery himself in January 2020 to repair his torn right Achilles tendon.

“It’s tested, I feel good, but being in actual fight is different,” Haney said. “I need to know I’m going to be able to get through without any (shoulder) injuries. This guy is coming off surgery, too, and there are things there that I’m sure are going to be in the back of his mind, too.

“This is a big test for me. I plan on passing it. The whole time away from the ring has made me even hungrier. What anyone else says I don’t care about. I need to focus on what’s in front of me right now. The other stuff will come later.”