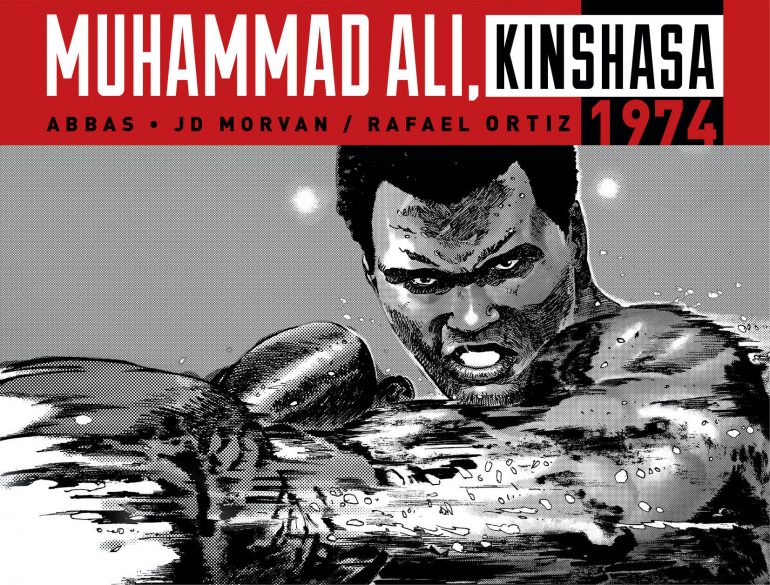 Let’s be honest, does humanity really need another book recounting the triumphs of Muhammad Ali?

From “King of the World” to “Shadow Box” to “The Fight,” Ali’s impact on the literary world has been far-reaching and immense. He’s everyone’s hero, and many of the greatest chroniclers of history, from David Remnick to George Plimpton to Norman Mailer, took a stab at applying their genius to Ali’s virtuosity, penning thousands and thousands of words on his fights, personality, influence and place in history. Has any athlete been as dissected and celebrated? Has anyone had more official photographers, biographers, hero-worshipers?

At the same time, if ever a subject demanded this much scrutiny, surely, it’s Ali. He’s one of the most influential and compelling figures of the 20thcentury. But the endless volume of books and films capturing his greatness can be a bit overwhelming, a little tedious. Many of these books are excellent page-turners, while others kind of recede into the background. 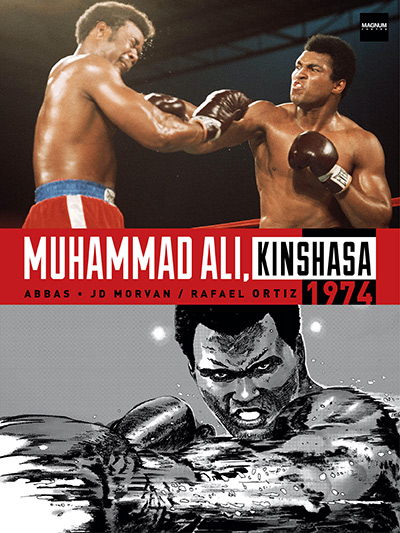 Which is why it’s so refreshing to come across “Muhammad Ali, Kinshasa 1974,” a new, engaging and entertaining graphic novel from Titan Comics on the “Rumble in the Jungle,” Ali’s seminal win against George Foreman on Oct. 30, 1974 in Kinshasa, Zaire (now the Democratic Republic of Congo). Combining rare photographs taken in real-time by the photojournalist Abbas with a cartoonist vision of the fight by artist Rafael Ortiz and lyrical language from writer Jean-David Morvan, they recreated the “Rumble in the Jungle” and told the tale of one of Ali’s greatest triumphs from a fresh, personal and innovative perspective.

Ali’s bout with Foreman is told from the point of view of Abbas, an Iranian photographer who died in 2018 and was on assignment to take pictures for “Young Africa” magazine when he was hired by the French photo agency, Gamma, to shoot the iconic fight. Drawn with a comic’s flair for the dramatic, the renderings not only capture the moment and what came before and after, but it updates it, embellishes it, so that Foreman and Ali, their muscles popping with super hero enhancement, their gaze menacing and determined, come across as the legends that we remember them as.

Ali and Foreman’s fight may be captured in countless newspaper clippings and books and films, but it’s also taken on the feel of an urban myth with almost mystical qualities, so retelling the fight in a comic book feels right, as do the real-life photos that bring us back to reality and anchor this historical memoir.

The drawings and photos allow us to revel in the imagery and history of that unforgettable night, and the torrid pace of the storytelling, the many flashbacks allow us to see the full context of the fight and what it meant for the careers of the people who witnessed and participated. As we are suddenly catapulted into the ring with Ali and Foreman in 1974, we are just as quickly thrust into their backstories of how they got there. 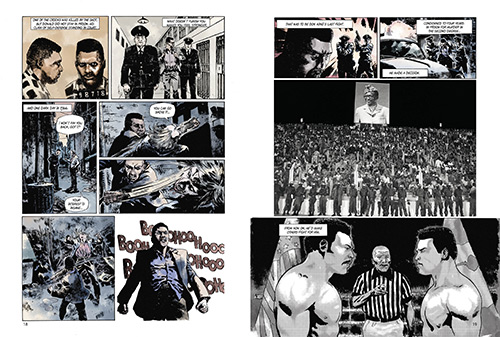 So, there are cartoons illustrating Foreman’s two-round destruction of Joe Frazier, billed as “The Sunshine Showdown” from Kingston, Jamaica, in 1973, and Ali’s bouts with Ken Norton and also Frazier. We are introduced to the Cleveland-born promoter Don King, who served nearly four years on a manslaughter charge and whose idea it was to bring the fight to Africa and have it take place in the wake of a large, grassroots music festival that, described here as a cross between “Woodstock and a school picnic.”

We know most of these stories already, but we’ve never seen them depicted this way. We are taken to Ali’s youth in Louisville in 1954 and reminded that he was brought to a boxing gym for the first time after his bicycle was stolen. The cartoon image of a young Ali tentatively stepping foot into a ring for the first time is then juxtaposed with Ali doing the same in the next frame in 1974 in Kinshasa on the eve of his fight with Foreman. He is testing the ring out and then asking his trainer, Angelo Dundee to see if he can loosen the ropes a bit, in the graphic novel’s telling, all setting up the drama of Ali employing the rope-a-dope tactic to weaken and sap Foreman of his strength.

These tellings have the quality of viewing the fight and the other happenings through the photographer’s perspective, as if we’re existing in the passages of his imagination and we’re peering through his lens and capturing the images of Ali and Foreman dancing in Zaire. We’re introduced to the photographer, Abbas, his beginnings in Iran and then Algeria, the events that led him to pursue photography as a livelihood in a search for truth and accuracy in the telling of current events, his quest to distill a specific, uninterrupted moment in time with his camera.

Just as quickly we are suddenly parachuted into Houston’s Fifth Ward and into the humble beginnings of Foreman, whose experience in the Job Corps helped ground him and provided him direction, propelling him to the 1968 Olympics in Mexico City, where, at just 19, he captured a gold medal, setting up his entrance into the professional ranks. 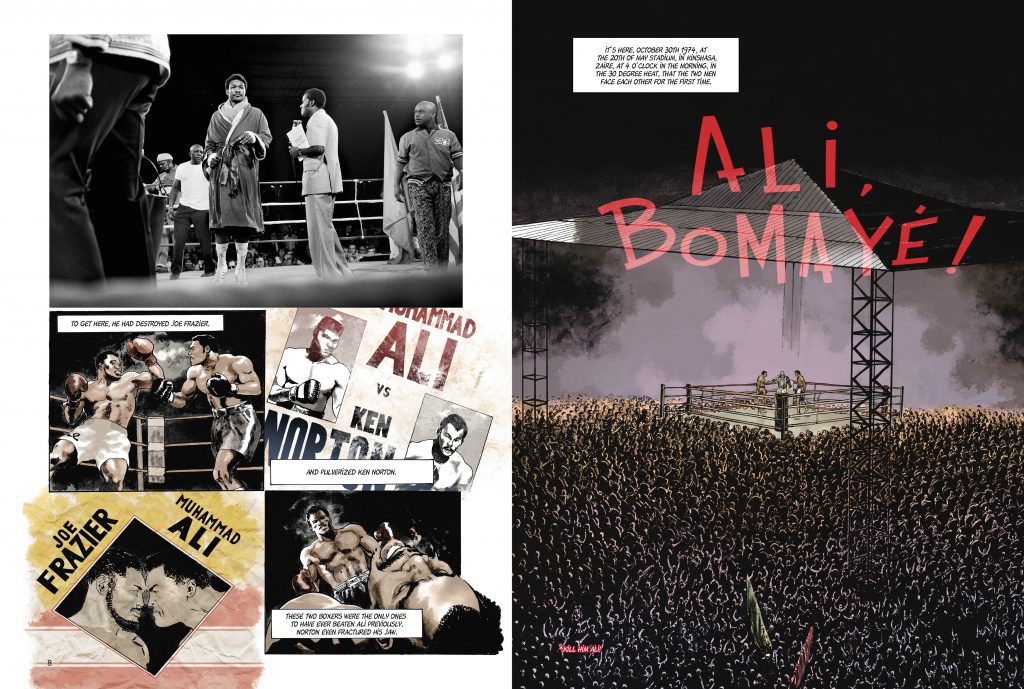 We are then catapulted back into the ring in Zaire, where Abbas observes Ali’s strategy to absorb Foreman’s punches and tire him out, an approach that is only successful because of Ali’s supernatural ability to endure punishment and out-fox his opponents, traits he developed as a youngster, which is where we’re taken next — back to his youth and the building blocks of his early career, his fights with Sonny Liston, Doug Jones, Floyd Patterson, soaking up punishment at the hands of Frazier and Norton. We are then familiarized with his conversion to the Nation of Islam, when he changed his name from Cassius Clay to Muhammad Ali, and his opposition to serve in the Vietnam War, all of which is told in whirlwind fashion in illuminating drawings and language.

And finally, we are brought back into the ring for Ali’s slow-motion-like knockout of Foreman. Known for his ferocious punching power and brooding, sullen demeanor, Foreman was favored against Ali when they met in 1974. Foreman had demolished two of Ali’s nemesis in Frazier and Norton in two rounds apiece in the two years preceding the bout, and at 25, was seven years younger and fresher than Ali, who had already been stripped of his title and suspended 3½ years for his refusal to enter the draft and join the U.S. Army. Moreover, Ali had previously suffered his first loss against Frazier in their 1971 “Fight of the Century” at Madison Square Garden in New York City via a briskly fought 15-round, grueling unanimous decision in which Ali was floored in the final round by a Frazier left hook. 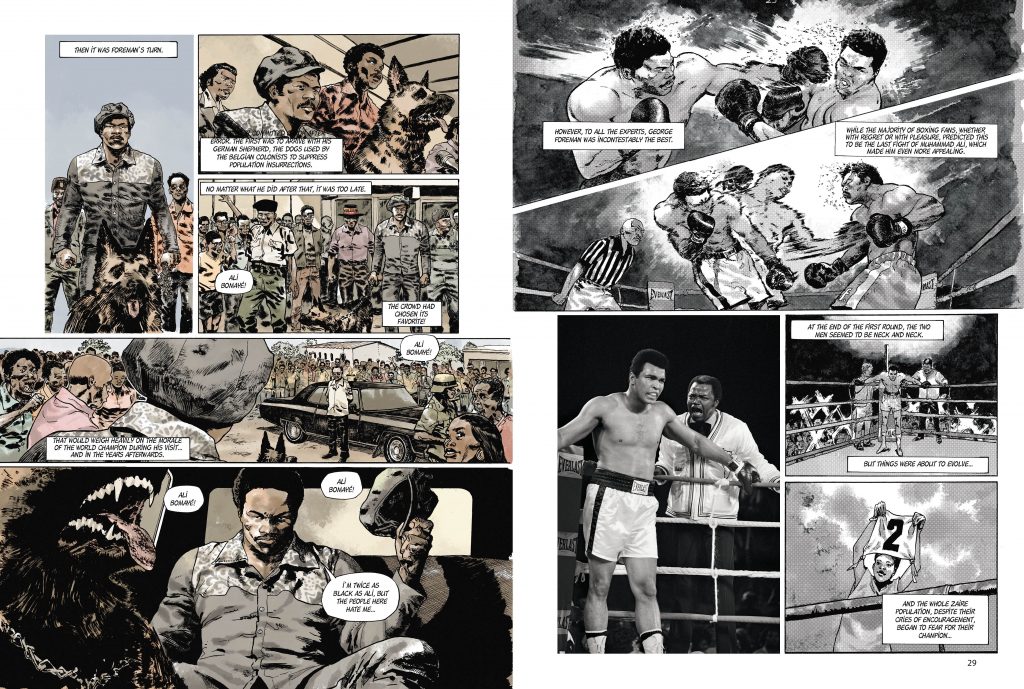 Surprising most observers, instead of dancing away from Foreman’s power, Ali chose to stand up to it, to neutralize it by laying on the ropes and covering up while Foreman gassed himself out, throwing heavy shots that mostly missed their mark. Ali, no longer possessing a dancer’s grace, used his remarkable durability and ring savvy to outclass Foreman. With Foreman falling in with his punches and visibly tired, Ali released a swift right hand that snapped Foreman’s head back in the eighth and caused him to lose his balance. Ali sprung forward and let loose several more unanswered punches, punctuating the flurry with a right hand. The volley of shots was so quick and so sudden that it left Foreman flailing and lurching around the ring before he eventually fell hard on his right shoulder on the canvas, and Ali scored the improbable KO at 2:58 of the round. 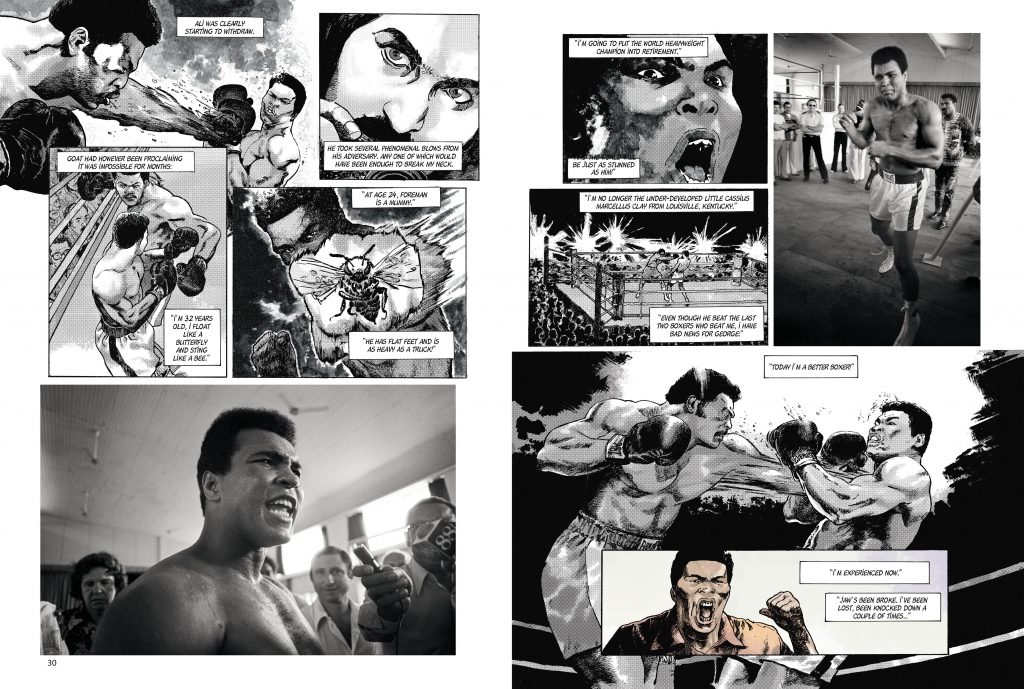 Just as we’re digesting the magnitude of the win, we are then taken to Abbas’ hotel room, where he celebrated Ali’s victory with the company of two women he met at a local watering hole. So, Ali wasn’t the only one who scored a victory that night.

Speaking of why the comic drawings and photos work so well together in this telling, Morvan, the scriptwriter, told Ring Magazine, “We believe that the comic and the photos are complementary. The photo is a snapshot, the comic strip is a succession of boxes where the main action takes place and which allows the reader’s imagination to make them interact.”

Of Abbas’ talent as a photographer and the photos he kept in his personal archives for 36 years, Morvan described him as basically being everywhere the night of the fight, floating above the fighters to capture the action. “You would think that, like Ali, he was circling the ring, jabbing when he pressed the trigger.”

MUHAMMAD ALI, KINSHASA 1974 is on sale on February 23, 2021 in comic shops, all good book retailers and digital devices in February 2021. Preorder here: