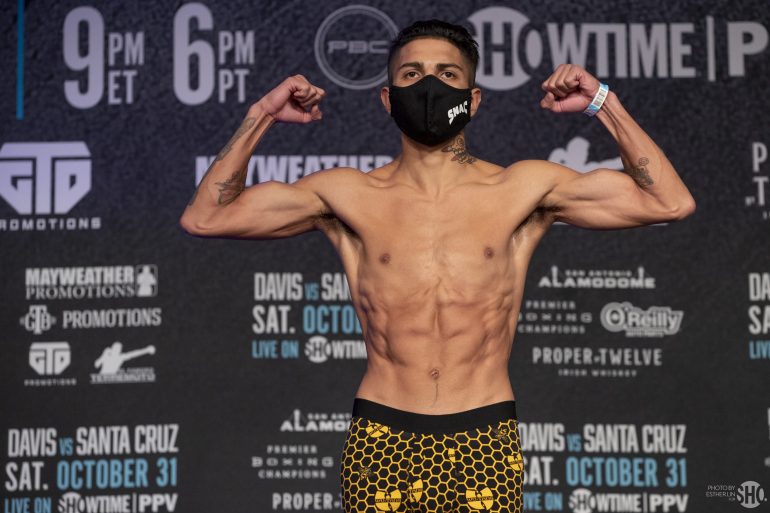 Mario Barrios made a triumphant homecoming on Saturday night, retaining his secondary junior welterweight title for the first time by sixth-round knockout of “Cowboy” Ryan Karl in the co-feature of the Showtime PPV card headlined by Gervonta Davis-Leo Santa Cruz at the Alamodome in San Antonio, Texas.

Barrios got the chance not only to fight in his hometown on a major card but to do so with fans in attendance as a socially distanced crowd was permitted to attend a championship-level card for the first time since the coronavirus pandemic.

Barrios looked much better than he did when he claimed the vacant secondary 140-pound belt by disputed decision over Batyr Akhmedov in his previous bout 13 months ago.

Although Barrios dropped Akhmedov twice few thought he had won the fight. But he left no doubt against Houston’s 28-year-old Karl (18-3, 12 KOs).

Barrios (26-0, 17 KOs), 25, landed many crisp punches, but his left hook served as his most effective weapon. He knocked Karl off balance with it a few times. Karl tried to make it an inside fight but was largely unable to because he couldn’t get past Barrios’ jab. He followed Barrios around looking for a big shot while Barrios peppered him with a variety of punches, including many body blows.

Ronnie Shields, Karl’s trainer, pleaded with Karl to apply more pressure following the fifth round as he continued to fall behind. But in the opening seconds of the sixth round, as he tried to do what Shields asked of him, the Virgil Hunter-trained Barrios dropped him with a right hand.

Later in the sixth round, an accidental head clash ripped opened a terrible cut over Karl’s right eye and blood poured down his face.

Referee Luis Pabon called timeout for the ringside doctor to examine the wound and the fight was allowed to continue. They immediately went hard after each other until Barrios dropped Karl during with a pair of left hooks to the chin during a fierce exchange. As soon as Karl went down Pabon called off the fight at 2 minutes, 23 seconds.

“I’ve known Ryan a long time,” Barrios said. “I knew he was going to come hard at me, but I also knew that it was his only chance. I was just being patient and picking my shots. I started to really land them and got him out of there.

“I was ready to go a hard 12 rounds, but my patience helped me get him out of there. I listened to what Virgil was telling me in the corner. It was great to get the job done here at home.”

Karl, who had known Barrios for years from their days boxing in the same amateur tournaments around Texas, saw a three-fight winning streak come to an end.

“I feel fine. It was a tough fight, good fight, close fight I felt like,” Karl said. “Good head butt, bleeding pretty good but overall I feel fine. I’m not a sore loser. I come to fight, that’s what I expected, a fight. And so congrats to Mario on the win. We’ll move on from here.

“I wish the referee never would’ve stopped it. That’s how I feel about fights. I felt like I wanted to fight, I wanted a chance to get up and continue. But it is what it is. That’s his job. He has his and I have mine. And we obviously have different mindsets because I’m the one fighting. But of course, like I said I would always like to continue if I have a chance.”

Prograis stops Heraldez in second round

Prograis (25-1, 21 KOs), 31, a southpaw fighting out of Houston, was fighting for the first time since losing his 140-pound belt by majority decision in a hard-fought battle with Josh Taylor in a unification bout in the final of the World Boxing Super Series tournament last October.

Although his fight night ended impressively, he failed to make weight on Friday. The fight was contracted at 140 pounds but he was 141.6 pounds. The camps made a deal to pay Heraldez additional money from Prograis’ purse and the fight went on.

Prograis came into the fight with a lot on his mind as his wife was due with their third child, a daughter, at any moment.

“My wife just told me to get this over with because she’s due to give birth any minute now,” Prograis said about what his wife told him before the fight. “I’m living two hours away from here so I’m going home right after this.”

Prograis, who had said ahead of the fight that he “needed” a knockout win, landed several hard left hands to take control in the first round against Heraldez, who was coming off a draw with former junior lightweight titlist Argenis Mendez in May 2019.

Prograis continued to stalk Heraldez in the second round and then in the third dropped him hard with a clean left hand on the chin about a minute into the round. Heraldez beat the count but Prograis was all over him. He caught Heraldez with another sharp left hand and continued to batter him until Rafael Ramos stepped in to stop it at 1 minute, 23 seconds.

“It went pretty well. Heraldez was a tough opponent to get back in with after a year layoff,” Prograis said. “But I’m glad to be back.”

Earlier this year, Prograis parted ways with promoter Lou DiBella to take a one-fight deal to box Heraldez (16-1-1, 10 KOs), 30, of Northridge, California, with the prospect of a potential longer deal if he won and possibly a fight with the winner of Barrios-Karl.

“I still feel like I’m the best at 140. I’m going to keep proving it every time I fight,” Prograis said. “Me and Josh Taylor had a close fight, and I think if it had happened in the U.S. (instead of England) I would have won. We know that one day we’ll have to rematch at 140 or 147. If the Barrios thing is on the table in the future, then we’ll do that.”

Heraldez was ticked off about the stoppage.

Lightweight Isaac Cruz, who said he sparred more than 200 rounds for the fight, needed less than one minute to crush former two-time world title challenger Diego Magdaleno in the first round of their title eliminator in the opening bout of the pay-per-view.

“The new Mike Tyson from Mexico was born tonight,” Cruz said through a translator. “I thought it would go longer tonight, but my natural instinct is always to go for it in the first round. I have confidence that I could win the world title right now. I thought it was a statement win. From now, on hopefully everyone will know my name and I’ll get the big fights.”

As soon as the opening bell sounded, Cruz stormed across the ring and took it right to Magdaleno, eventually flooring him with a flush right hand to the chin less than 30 seconds into the fight.

Seconds later, Cruz continued to assault Magdaleno, forcing him to the ropes and nailing him with two powerful right uppercuts that dropped him again. He fell with his head resting on the bottom ring rope as referee Mark Calo-oy waved off the fight at 53 seconds.

The fight was officially an eliminator for the No. 2 position in the IBF 135-pound rankings, moving

“I would love a Teofimo Lopez fight. I’m very motivated right now,” Cruz said. “If he’s tough enough to take it, bring it on. I’m happy to be in this position in the division.”

Many thought Magdaleno was finished after he suffered a brutally one-sided seventh-round knockout to Teofimo Lopez in February 2019. But Magdaleno looked good in a 10-round decision win over Austin Dulay this past February to set himself up for the eliminator with Cruz. He said the victory over Dulay had “sparked a fire” in him to work his way back another title shot.

But now Magdaleno (32-4, 13 KOs), 34, a southpaw from Las Vegas, who was in his second fight with trainer and former junior featherweight world titlist Clarence “Bones” Adams, has yet another disappointing ending in an important fight. He previously lost both times had challenged for a world title, once at junior lightweight in 2013 and once at lightweight in 2015.

“I don’t want to make any excuses but I’ve been fighting some heartburn,” Magdaleno said. “But he came out swinging and I was trying to adjust in there. I guess I was just fighting two different things in there. You know, stung cold, and got hit. That’s it.”