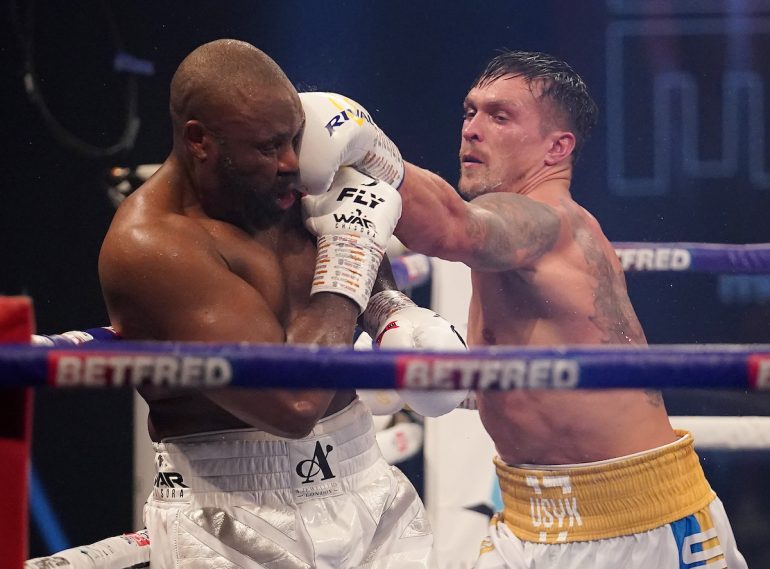 Say it loud, Aleksandr Usyk is a major player in the heavyweight division.

He might not be able to match the giants for size and power but with the attributes he’s got, patience, accuracy, skills and movement, he will be a headache for the best guys in the division. That was really one of the things his fight at the Wembley Arena with Derek Chisora on Saturday was designed to tell us.

Usyk won a 12-round unanimous decision by scores of 117-112 and two of 115-113 in a fight that had plenty of action and delivered what many hoped it would.

Chisora just couldn’t do what he wanted to do for 12 rounds and turn the screws on the Ukrainian for three minutes of every session.

“I feel good,” said Usyk (18-0 13 KOs) in his post-fight interview with Sky Sports in the U.K. “It was a real test at heavyweight. Chisora is a big guy, a hard guy. I fought his fight. I was expecting an even tougher fight.”

Usyk is the mandatory challenger for Anthony Joshua’s WBO belt. “My plan is to go home, have time with my family and train,” he said, adding that he’d been inactive for a year. “The plan is to be not just world champion but to be undisputed champion. Undisputed heavyweight champion.”

“I feel great, just disappointed,” he concluded. “I feel I won that fight 100 percent. I was pushing the pace but the judges saw it a different way.”

Tenacious Chisora came out bombing as expected. He fired off a clubbing overhand right in the opening exchanges and then worked on holding Usyk with one hand while punching with the other. Uysk had some success with short shots that clipped Chisora on the way in and the Ukrainian also tried to match Chisora physically in the clinches.

Usyk started the second with his straight left motoring. He worked Del’s body, too, but with a minute left in the round Chisora’s right came into play and he landed some beefy hooks.

“You can do this all night,” screamed Chisora’s friend and former Usyk victim Tony Bellew at ringside in between rounds.

Chisora missed clearly with several big blows in the third and Usyk began to find a rhythm. Chisora, by now, seemed to have respect for the Ukrainian’s power as well as his skills.

Even by the end of Round 3 Chisora had worked incredibly hard and he was outboxed through the fourth.

The Finchley fighter was finding it hard to pin the former cruiserweight champion down and even harder to land significant shots.

Chisora had a spell as a southpaw in the fifth and fired in a couple of jabs but his charge was seemingly slowing and that allowed Usyk to look increasingly comfortable.

Usyk was moving smoothly in Round 6 and Chisora was struggling to close the distance. Worse than that, he was starting to look more fatigued in his bid to get closer.

In the seventh the tide seemed to turn irreversibly. Chisora was becoming a static target and Usyk was able to catch him and then, with seconds left in the round, the Londoner was caught by a cluster of shots and possibly saved by the bell. He looked weary and almost done.

By the eighth the hunter had become the hunted as Usyk forced Chisora to the ropes. The Chisora plan had been to march through everything that came his way but he could no longer do it.

However, Uysk indicated that he’d hurt his left hand towards the end of the ninth and Chisora came out firing in the next and the 11th round might have been the best of the fight as both enjoyed moments of success. The flow of the fight was similar in the final session. Chisora, fighting through his second wind, was giving it everything. A couple of times Usyk picked him off but Chisora had his moments with his pressure and he’d earned them.