Julian Rodriguez prepares for big 2021, but first must get past Jose Eduardo Lopez 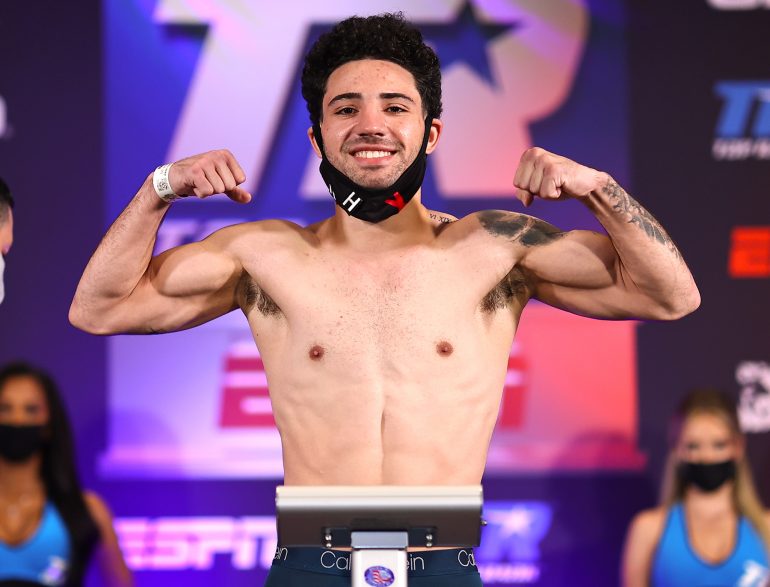 Up until the deluge of messages came in the day prior, Julian Rodriguez had forgotten that Wednesday was his birthday. Rodriguez, who turned 26, hadn’t had much time to think of birthday cake and blowing out candles while he’s deep in training camp in Las Vegas, at the Salas Boxing Academy.

“This camp completely has me locked in,” said Julian Rodriguez (20-0, 13 knockouts), from his base not far from “The Bubble” at the MGM Grand in Las Vegas, where he’ll face Jose Eduardo Lopez (29-7-2, 15 KOs) on Saturday in a ten-round junior welterweight bout on the Inoue-Moloney card, which will be televised by ESPN+.

Even after his last performance, a one round blowout of the previously unbeaten Anthony Laureano in August, the Hasbrouck Heights, N.J. resident isn’t putting out calls yet demanding the big names at 140 pounds. To him, he did what he was expected to do, showing off his two-fisted power and combination punching to score three knockdowns of an overweight and overmatched opponents.

Though he doesn’t want to get his hopes up, he says, he expects that promoter Top Rank will give him the meaningful fights he wants in 2021.

“Do I think it made a difference in anything? Not really,” said Rodriguez of the Laureano blowout. “But I know my potential and I know where I’m gonna start to be a little more vocal with things like that. And I know exactly which fighters I want to fight that I’ll do the same thing to, and those will be the statements.

“I think they’re lining me up and including me in that wave at 140. I think I have to just continue doing what I’m doing and in 2021 I’ll be able to get that showcase fight. Where now, this is the one where I’ll make my statement for real.”

Top Rank Vice President Carl Moretti, also a New Jersey resident, says he expected the Laureano fight to be more competitive than it was. Now he hopes Lopez, who has gone the distance in losing efforts to Viktor Postol and Humberto Soto, will provide Rodriguez with the rounds he’d need to prepare for a more competitive step-up next year.

“If Julian’s gonna win, he’s gonna have to work for the victory. Anything less than that, I’d be surprised,” said Moretti. “He needs to be as explosive as he is in the seventh round as he is in the first round. Sometimes that has to do with the guy on the other side of the ring where he just can’t take it. It’s not his fault but let’s see what we get on Saturday.” 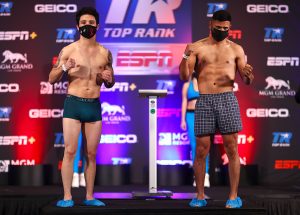 Lopez, 29, has only been stopped twice, against Sammy Vasquez in 2015, and against Diego Cruz in 2016. Since then he’s won three of his last four against respectable opposition, but is coming off a loss in May of 2019 to Mathieu Germain in Canada. Rodriguez is expecting a more durable test than the one he faced the last time out.

“He’s a journeyman guy, he comes in with wild punches and I think it’s a fight where I’ll use more of my skillset as opposed to just going in there looking to knock him out,” said Rodriguez. “I’m gonna be focused, more so the hand speed and volume punching, but that’s what I see out here. The second I go in there I might see an opening and I might take advantage of it early.

“I might be on my way to celebrating my victory quicker than expected.”

“I’ve wanted Saucedo forever but to be honest he looks kind of fried. And he looked fried before the Barboza fight, and that fight wouldn’t go 3-4 rounds, me and Saucedo. I don’t know if they’re willing to throw him in there with me as a last resort, I would love that, or I could just jump to Barboza,” said Rodriguez.

“But I wasn’t gonna sit there and make a lot of noise when I’m fighting these people. Once I start fighting these little step-ups that they’re giving me in 2021, then I know exactly how to navigate through the media, or navigate the company and my manager to really get the fights that I want.”

Moretti says that, since the junior welterweight titles are all spoken for, with Top Rank hoping to match Josh Taylor and Jose Ramirez for the undisputed championship in 2021, it could take some time before he gets his world title opportunity.

“As far as getting a title fight, it’s probably not gonna be any time soon because of what’s going on above him. There’s not four open titles, there’s no vacant title, you have to see what happens with that matchup,” said Moretti.

“But there’s so many quality guys at 140 that he can still make good fights for TV, that will probably be the next step. When and who that is is still to be determined. But that’s kind of what you see at least for the first half of 2021.”

Until then, Rodriguez has business to handle on Saturday. And then he’s got a birthday to celebrate, but not just his own.

“I don’t really think too much of my birthday, it’s more so about my son’s birthday because his birthday was four days ago,” said Rodriguez about his eight year old son. “It’s for both of us, mainly for him because he’s a child. It’s not really about me anymore.”